A slight departure from the norm this week. I tend to focus on arcade games from the early eighties, but a recent story came about that I thought had to be shared, especially as it involves a UK gamer, and a great arcade related quest.

Although released in 1993, there’s no doubting Namco’s Ridge Racer as a true arcade classic. For the first time, gamers could see that arcade graphics were finally getting the visage of realism that they’d been crying out for. This was cutting edge stuff at the time, compared to the bold animated nature of previous driving efforts like Atari’s Pole Position or Sega’s Outrun. I remember thinking that the game was another world away from Atari’s Night Driver, the first arcade game I can remember playing in the 70s. The future had arrived – in spades. 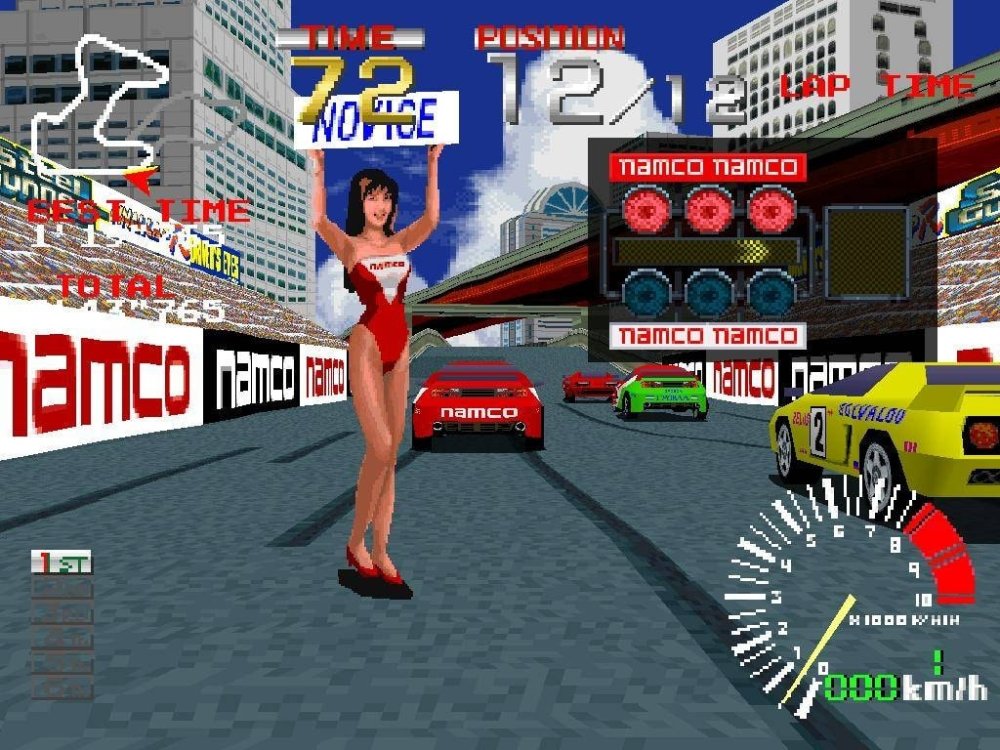 The first PlayStation console, released in 1994 headlined with a conversion of Ridge Racer as one of its killer launch apps – it was in fact the very first title officially released on the platform. Seen as an ideal candidate for a home console port to showcase the new hardware, the game quickly became Sony’s very own “Mario”, and hundreds of thousands PS1’s were sold purely on the back of this game. For many players, first sight of Ridge Racer was on the PlayStation home console.

With glorious visuals and a thumping techno soundtrack, the immersive nature of the game has spawned a series of sequels over the years, across both arcade and home consoles. Gameplay wise, the player is given the opportunity to experiment with drifting – a first for the genre – adding another layer of complexity that gamers wanted to explore and engage with.

One of these players was a young Jason Newman. Seduced by the game’s ability to give a real sensation of speed, he quickly became a big fan:

I first played it when I borrowed it from a friend back in 1996. I was amazed that you could actually skid the cars as I had previously only played games on Master System which with hindsight were pretty basic. In time I just realised that Ridge Racer was a great game with an incredible soundtrack. Best of all it was fast and simple to play. There is little time investment involved to actually pick it up and start getting something out of it.

Initially, Jason just messed around with the drift mechanic:

I just loved drifting and making the cars skid around as I was amazed you could even do this (after being on a SEGA Master System for many, many years prior.. this was crazy stuff back then). In doing so over and over, I got really good at harnessing the cars’ balance and movement. 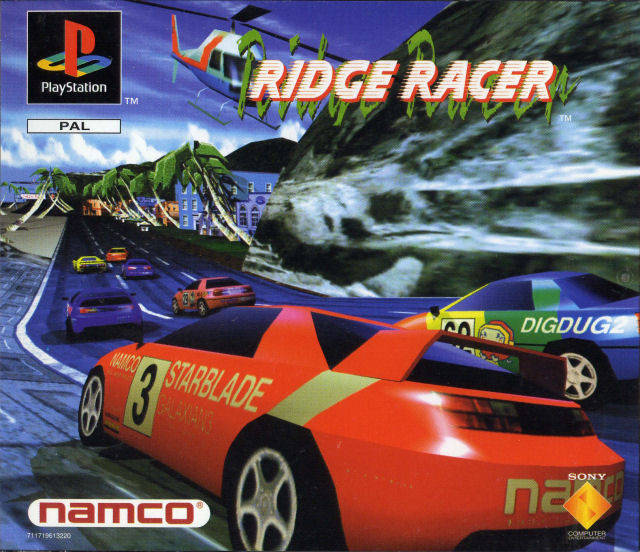 In time, Jason managed to play the game through and quickly completed it. Opening up all the challenges and bonus cars. He would play again and again and soon the structure of the courses became second nature. His groundwork in learning the weight and feel of the cars and how to drift properly and boosting out of corners, paid off. When your only competition is yourself, you learn to get under the skin of a game and in the case of Ridge Racer, you start shaving tenths of a second off your best lap times.

Like many gamers, he discovered Twin Galaxies after watching the King of Kong film.

I’ve always wondered if I was the best at the game and I did search high and low to see if I was. I never saw a better time but it’s not really official that way. I knew I was good but am I the best? I’d always wondered that.

Seeing the times posted by gamers up to that point, Jason realised that he had already beaten every time score he was looking at. He got to work. Armed with a camera, a PAL and NTSC PlayStation 1 console, he set about destroying every single world record posted on the Twin Galaxies database. As of today, Jason holds a total of 113 world record scores for Ridge Racer and its associated games – an amazing feat.

But he didn’t stop there. Determined to prove his dominance on the title, Jason purchased an original Namco Ridge Racer upright arcade machine. The cabinet was tatty, but using some electronics knowledge, and with the help of the UK arcade collector forums, the cab was soon up and running, and he was able to post new world records for the arcade version of the game:

I just think if you have that big an interest in a game you should invest in one as they are pretty rare to see in the wild now.

The sit down ‘Deluxe’ version: 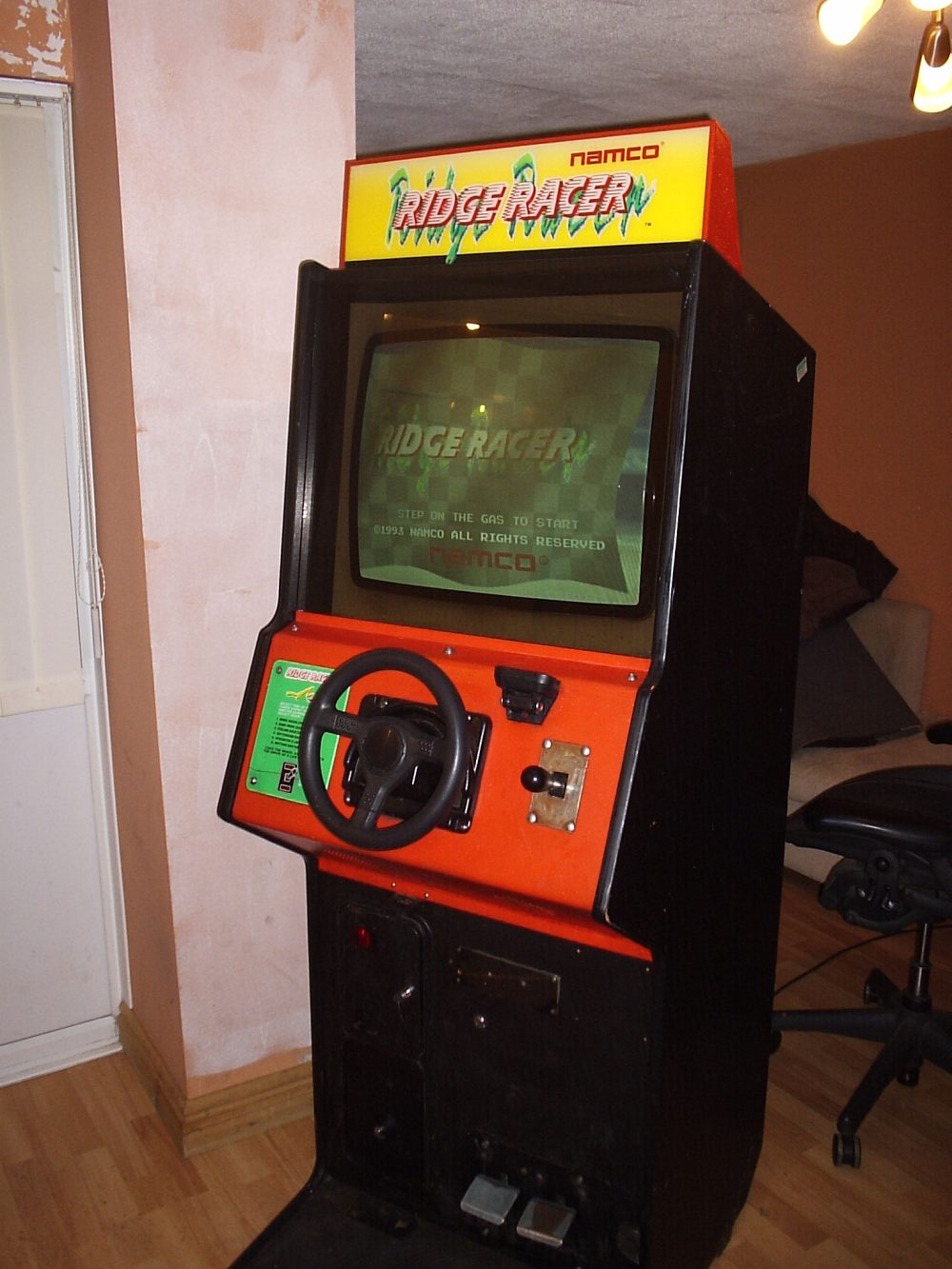 and a triple “widescreen” version. Very rare to find one of these:

But what Jason really wanted to do, was to play the game on the frankly bonkers “Full Scale” machine. For the uninitiated, this is probably one of the ultimate arcade simulators. This version was designed to give the player a more realistic driving experience. Players sit inside an adapted red Mazda MX5, and control the game on-screen right in front of the car. You can even take a friend along with you in the passenger seat of the two seater sports car.

The game is played in front of a 10 feet wide, front-projected triple screen, with the wheel, gear stick and pedals functioning as the controls. The ignition key is used to start, the speed and RPM gauges are functional, and fans blow wind on the player from inside the air vents. Speakers concealed inside the car provide realistic engine and tyre sounds; overhead speakers pump surround music towards the player. The game’s PCB is located under the bonnet of the car. It is truly over the top, but the ultimate Ridge Racer experience: 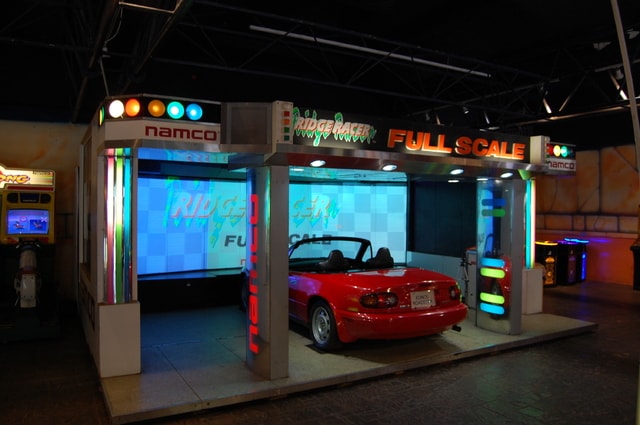 Look at it! Crazy stuff!

I’d never come across a Full Scale machine in my life and I have always wanted to play one. During my record attempts I found out Blackpool Pleasure Beach still had one on its floor. I figured it was kind of like going against the “boss” in a video game. It was the biggest Ridge Racer record I could get my hands on, on the biggest machine that Namco ever made. I guess it was the peak of the mountain regarding my world record journey and a great way to complete the set of records for the game on all of its platforms.

The process wasn’t easy. Jason had to get permission from the arcade to take the game over for a day, and the owners of the machine had to be contacted for their permission for the machine to used for a world record attempt. Once agreed, Jason secured a date, and armed with a GoPro camera he made the trip up north, got to the arcade and set his gear up.

The machine itself was in reasonable shape, but he found the gear shift wasn’t working, leaving him with no choice but to set scores using Automatic gears – not a huge problem, but it would mean that his times would be a few seconds short of being able to use manual gears – but no matter.

Sure enough, Jason was able to set a swathe of new world record scores and submit them to the Twin Galaxies database and Guinness World Records. There was footage on YouTube of the run, but it seems to have disappeared. But here’s a video to give you an idea of the machine he played on:

It’s amazing to note that the car is an actual production model straight from Mazda’s factory lines, but with no engine. All that is under the hood is arcade controls for the steering, clutch, brake and accelerator. It has never been on the road and is still effectively a new car. MX5 enthusiasts would go crazy for it – this is an as new shell/chassis for an old 90’s MX5. In theory the “car” could be road registered, have an engine fitted with a wiring loom and be legally driven.

Each of the three screens has it’s own dedicated PCB to drive the graphics hardware in unison: 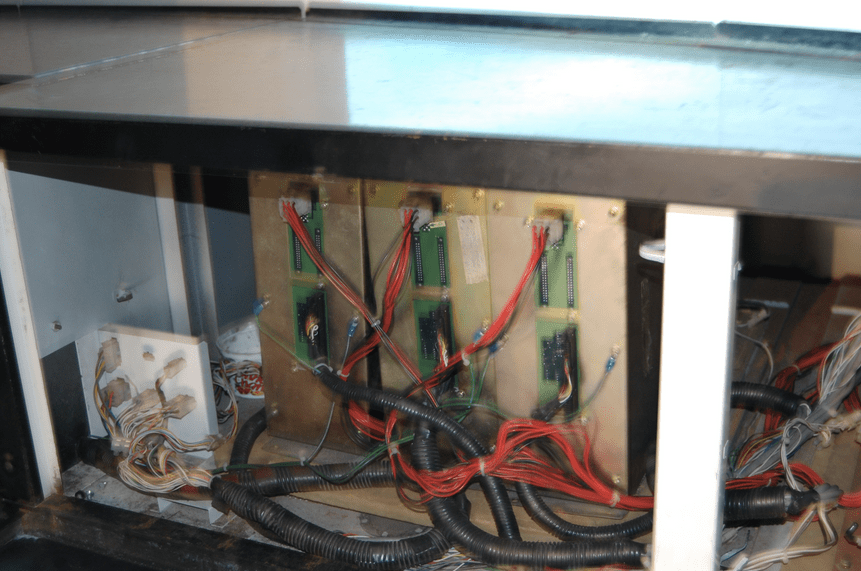 A look under the bonnet:

You have to admire the excess. This was Namco’s last mad hurrah to the arcade world – the likes of which we will never see again. Fantastic that the UK still has one of these in operation. Let’s hope it stays like that for years to come. We’re told by the operator at Blackpool that it takes quite a bit of maintenance to keep running. But surely for the experience it has got to be worth it. This is one piece of arcade history that needs to be kept alive. 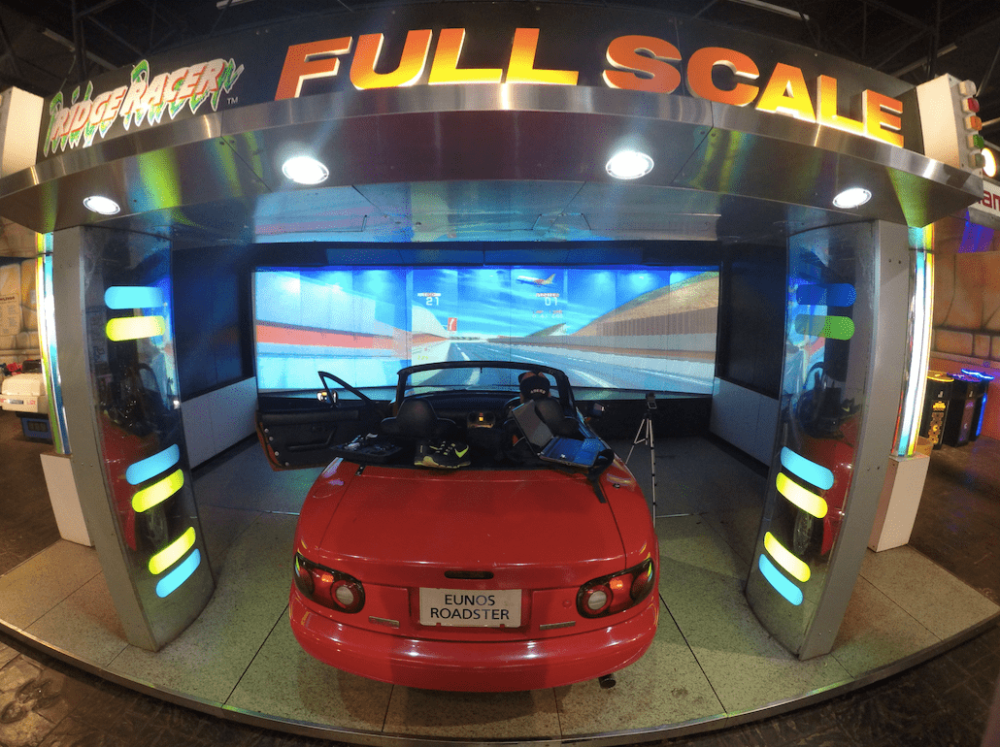 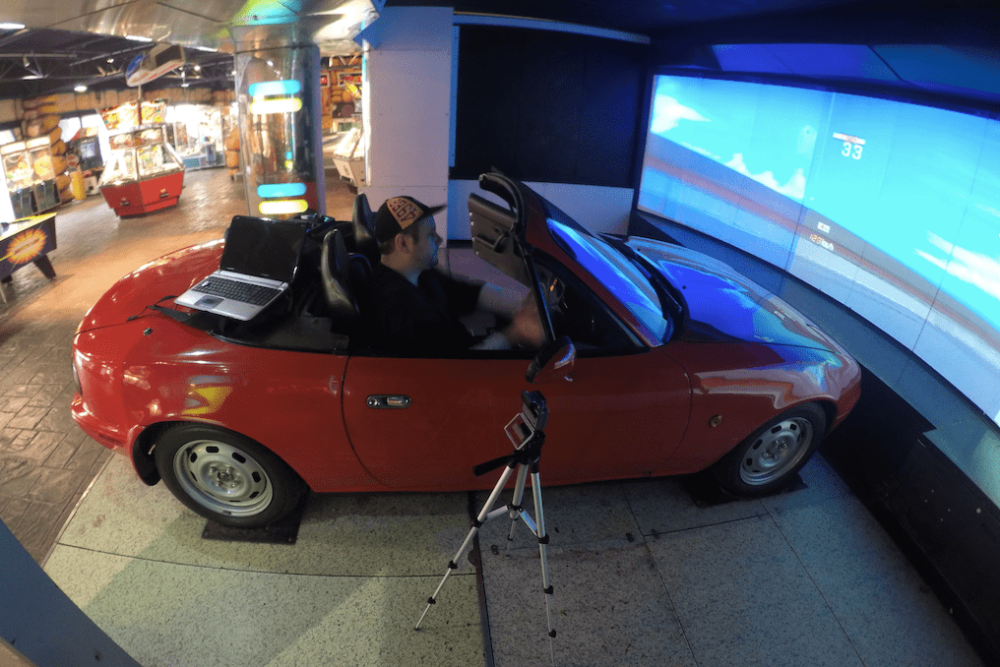 To exhaustively catalogue performances on every version of Ridge Racer is a bloody cracking feat, and it’s fair to say that this achievement is pretty unique in classic arcade gaming circles. To be able to culminate his journey by setting records on the ultimate Ridge Racer arcade machine, which in itself is an amazing piece of arcade history, really is the icing on the cake. Hats off to you Jason – over 100 world records on a single game series! And of course another arcade world record comes to the UK!

Jason plans on another trip to Blackpool over the summer to push the envelope further with his times. I can feel a road trip coming up…

Thanks for reading – see you next week.