Those of you with good memories may recall I wrote an article a few months back on the subject of brutal arcade machine “conversions” – you can catch up on that article here.

The practice of converting an original dedicated arcade cabinet was commonplace back in the mid to late 80s. Those of us who look back at memories of rows of dedicated cabinets with misty eyes and a soppy heart, tend to balk when we see a sorry looking Star Wars Upright badly converted to an Arkanoid.

But it’s worth remembering that the owners of the machines, the arcade operators, were businessmen. Arcades were easy money at their height, and with an average shelf life of around six months, maybe a year tops, these machines became obsolete very quickly. No one stopped to think that one day these money making lumps of wood would become collectors items, or that the arcade phenomenon would be regarded as a significant part of popular culture in years to come. Everyone was looking to milk the cash cow for every last drop. You had to keep feeding the beast by putting a regular flow of new games out on the arcade floor and wait for the money to roll in.

And if that meant butchering a cabinet that was no longer making money somewhere along the way, well, so be it.

So rather than buying a complete new cabinet for thousands of dollars and scrapping the obsolete stuff, operators could purchase just a PCB kit, or even acquire a cheap bootleg board of another title. This may or may not have included artwork for the marquee, control panel and sides. So, after giving it its last rites, you could pull your unplayed game off the arcade floor, drag it into the workshop, remove the old PCB, and whatever else needed ditching, and put your new kit into the shell of the old cabinet. A new lick of paint was entirely optional. Hey presto – you just updated your inventory for a fraction of the cost.

Some of these were done well, and had a bit of care and love put into them. Some were so well done, you wouldn’t know the cab had a previous life. Others were just down right nasty, as you’ll see below. Clearly some arcade owners were cheaper than others! What follows are some fine examples of what operators did with their cabinets when people stopped playing them – all in an attempt to keep the money rolling in through the coin doors…

Let’s start with Nintendo cabinets. Plenty of those about back in the day. Converting them was pretty easy. Here’s a couple of examples of operators’ handy work. The first is a Donkey Kong Jnr converted to a Bomb Jack: 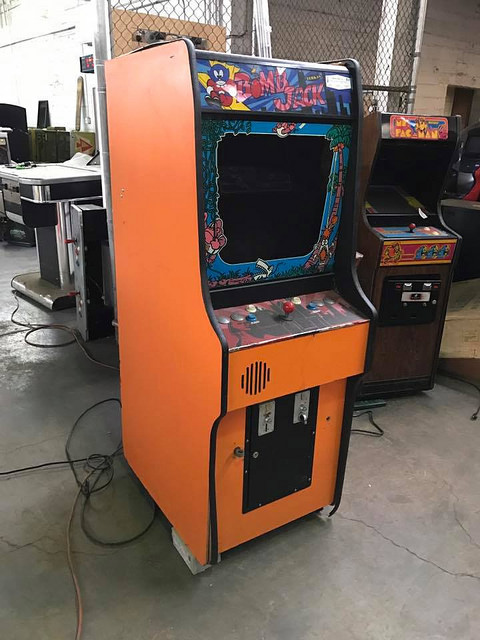 You can see evidence of the DK Jnr from the Bezel that remains there. And here, a slightly better conversion to 1943. They even managed to add new side art: 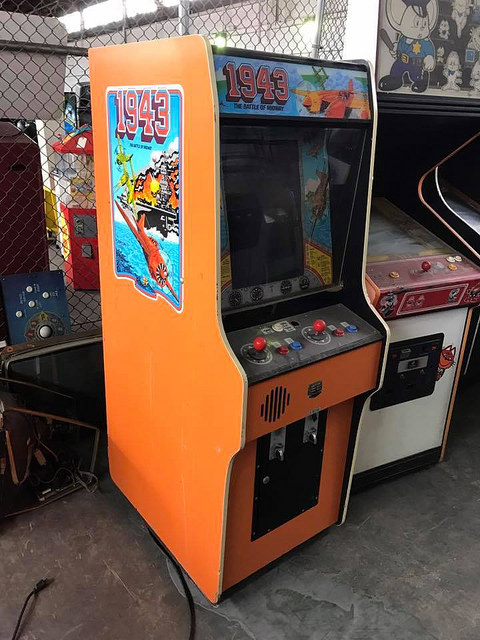 I wonder if that was released as a kit specifically to re-purpose Nintendo cabinets that were no longer being played? Everything seems to fit well.

Pac-Man next. What was a hugely popular game, quickly became old news for most players. Given the numbers produced (well over 100,000) it wasn’t unusual to see many of the original cabinets converted to something else. Here we see three cabaret Pac-Man cabinets given a new lease of life as Trojan, Psycho Soldier and Double Dragon respectively: 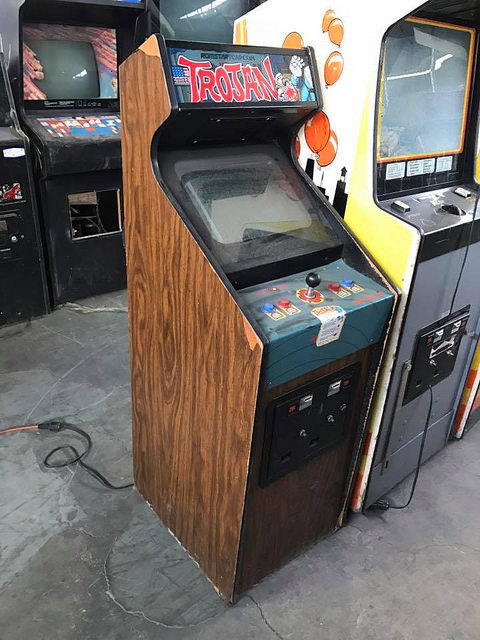 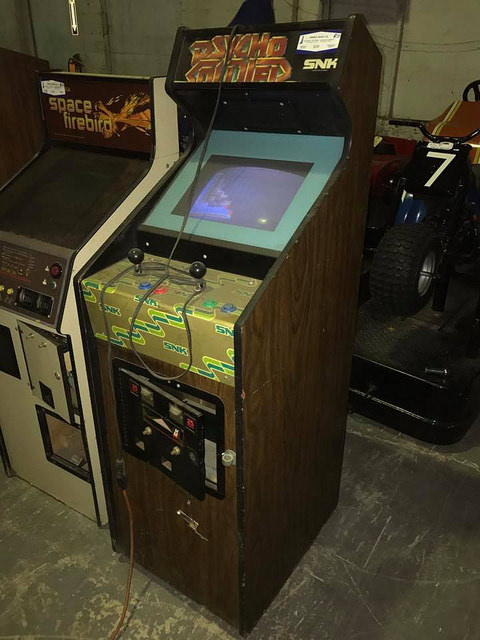 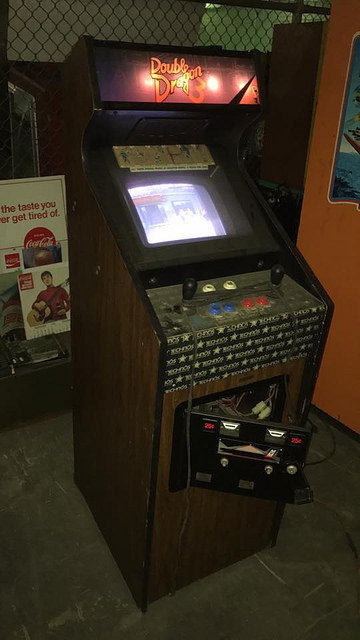 Interesting with hindsight, how anyone would think that any of those three games were better than Pac-Man. But when no-one is playing Pac-Man any more, what are you going to do with the unused cabinets?

Gyruss is regarded as a classic by most collectors today, but like all titles, it did have a natural shelf life. Here are three converted to Super Tank, Sky Shark and a Taito US Classic Golf game: 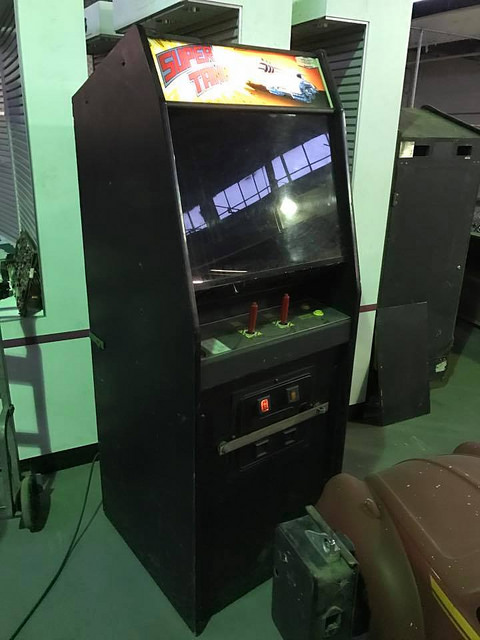 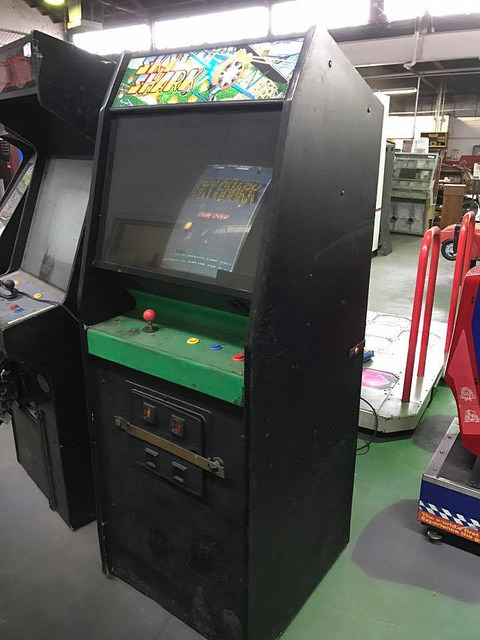 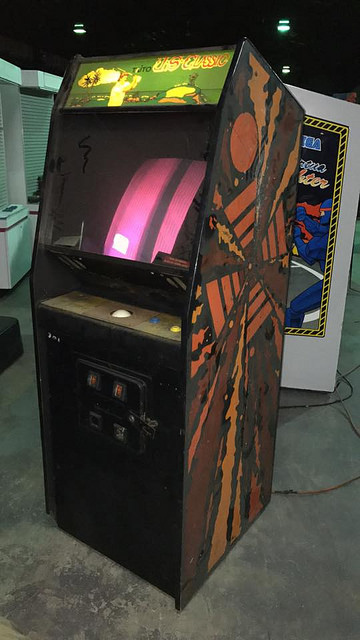 Amazing examples there of operators painting over that lovely orange artwork in the first two. Why would you? And that Super Tank looks pretty uncomfortable to play.

A crime against humanity here. Tempest becomes Perfect Billiards. I know nothing of this game, and can’t even be bothered to Google it. Horrible. But again, with Tempest being a rather unreliable vector based game, one can understand the commercial motivation to use the cab for something else once it died I suppose. Mind you looking at the state of this I’m not so sure: 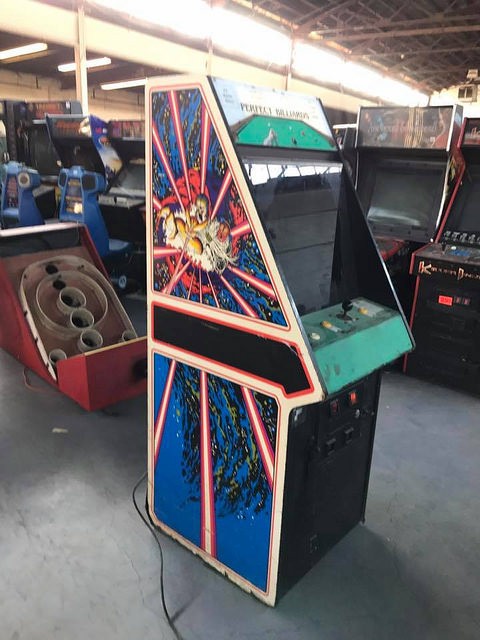 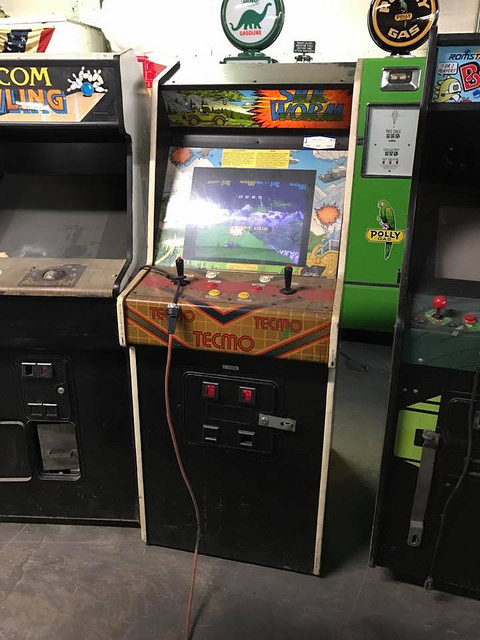 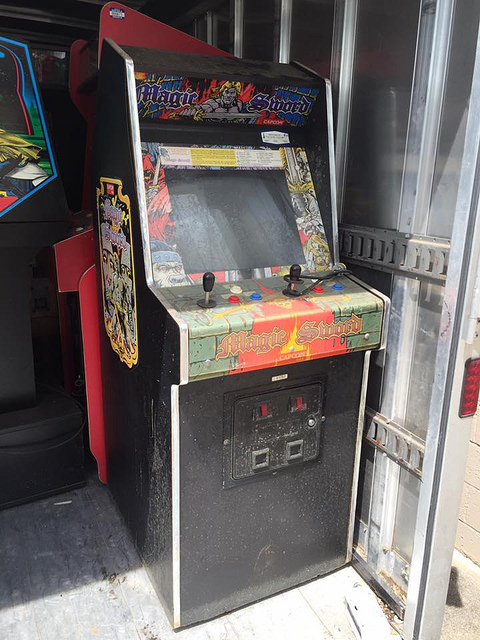 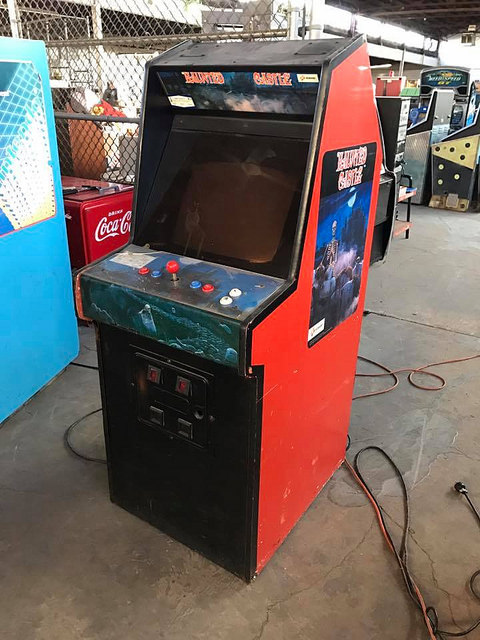 Ye Gods. One would hope the Missile Command artwork is safe under those horrid paint jobs.

Let’s rattle off a few more.

This lovely curved Universal cabinet is now a Capcom Strider. No evidence showing of what game it was originally: 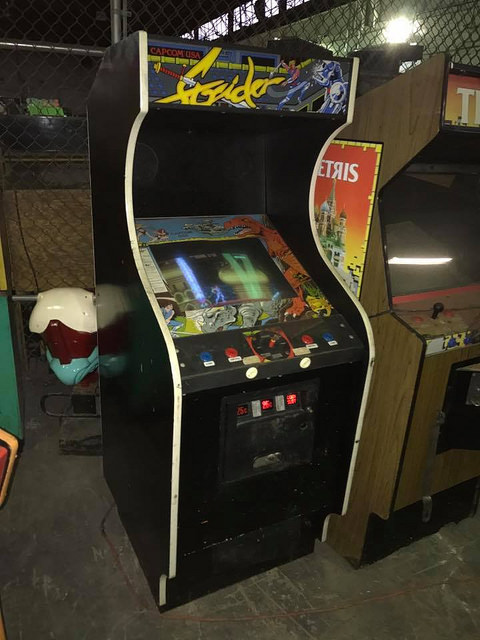 Konami Track & Field is now a Golden Axe (Wow. Just wow). I’m sure Golden Axe is responsible for more bad conversions than any other arcade title: 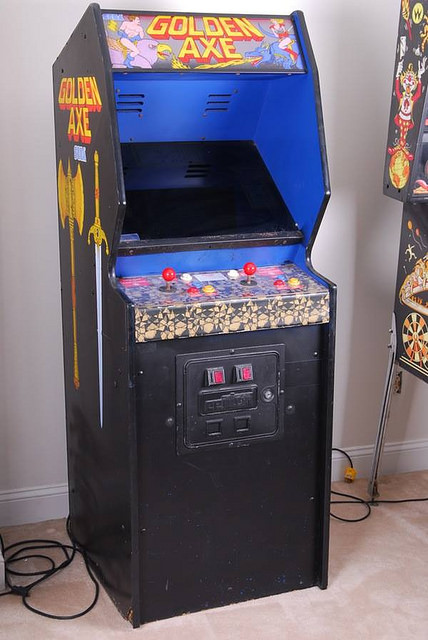 How about a Dragon’s Lair turned into a Trojan? 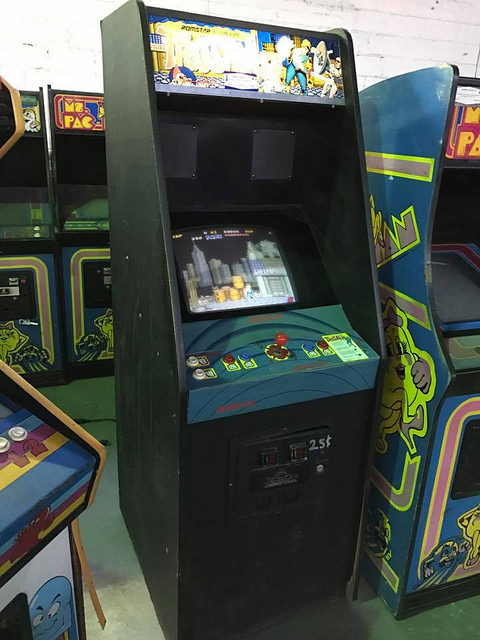 As if that’s not bad enough, about about these two Tron cabinets? One is now an Arkanoid, the other a Konami Ajax. I could cry: 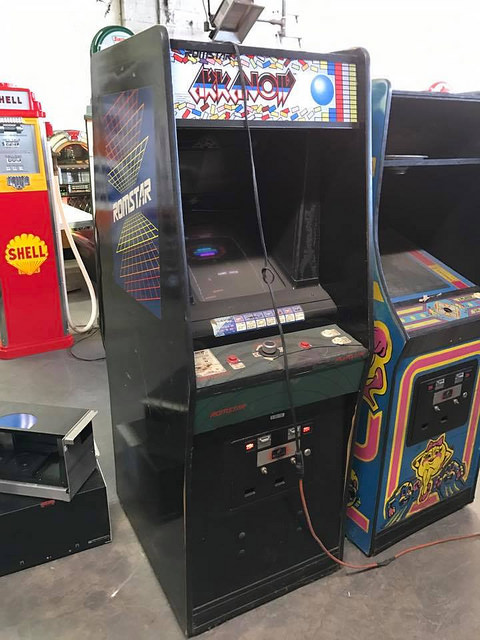 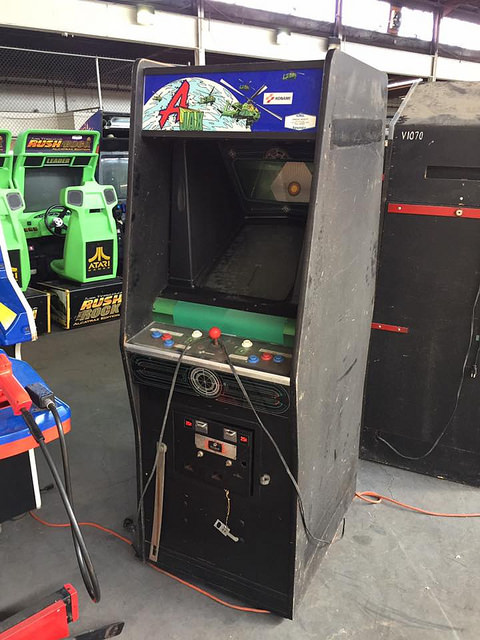 I love these two Defenders. Someone removed this Romstar Black Tiger’s side art to reveal it’s previous incarnation:

And this is probably the best of all of these. A Defender converted to a Rush ‘N Attack. Look at the new paint job! That’s taken some serious effort! 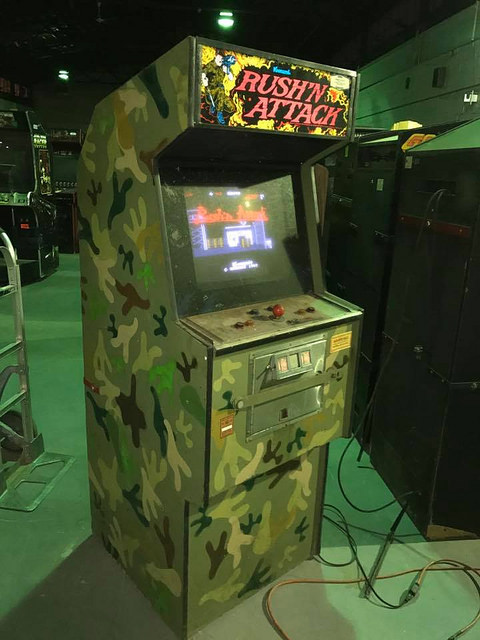 Brilliant. Or how about Midway Gorf to Rygar? Ouch: 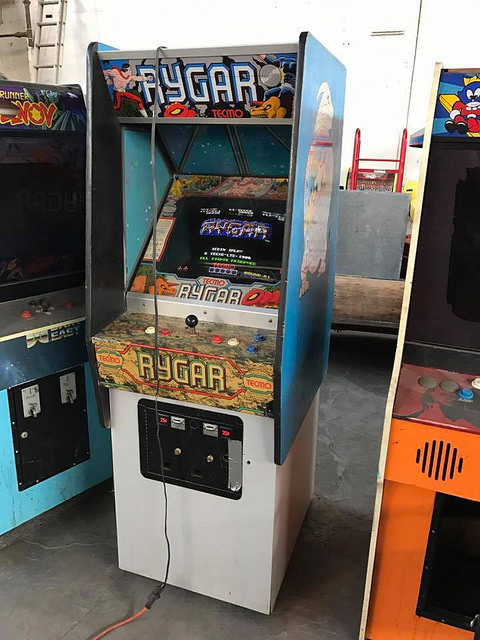 This one is interesting. Bally Midway over-ran their run of Mappy cabinets. With a few unpopulated cabinets left over, they re-purposed the carcasses into Jr Pac-Man cabinets at the factory. Not many were produced, which makes this is a rare and unusual piece: 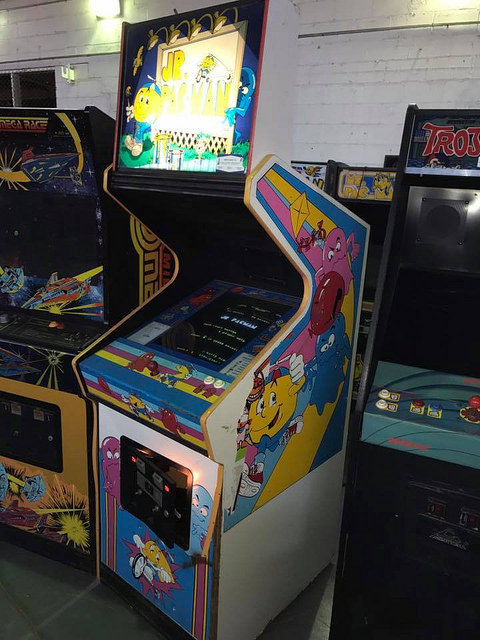 I rather like that. A factory conversion of sorts, rather than one done by an operator. Nice.

These Taito cabs were re-purposed at some point by operators in need of homes for Legend of Kage, Air Buster and Bubble Bobble: 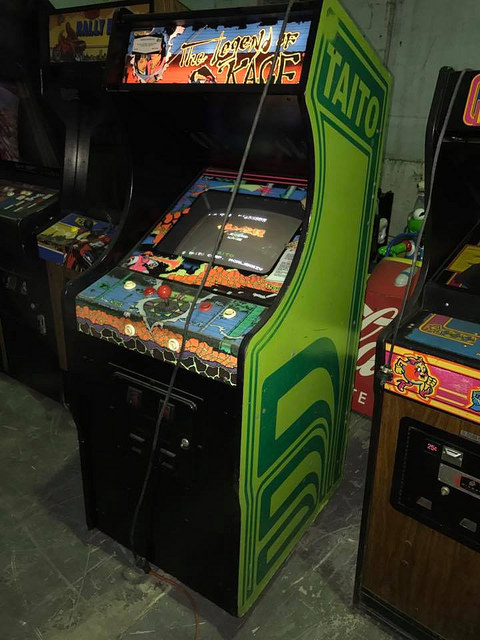 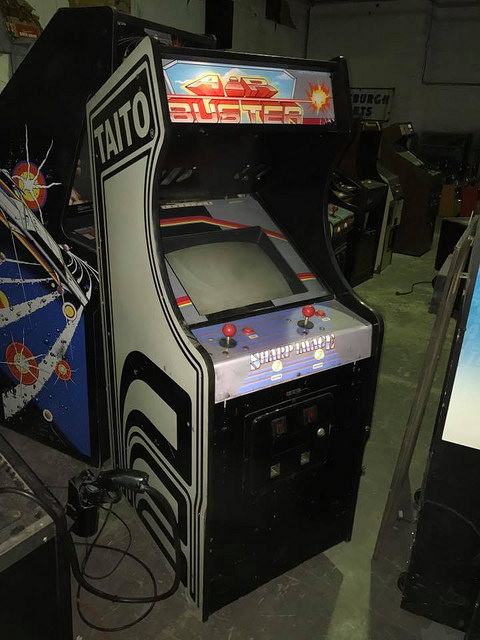 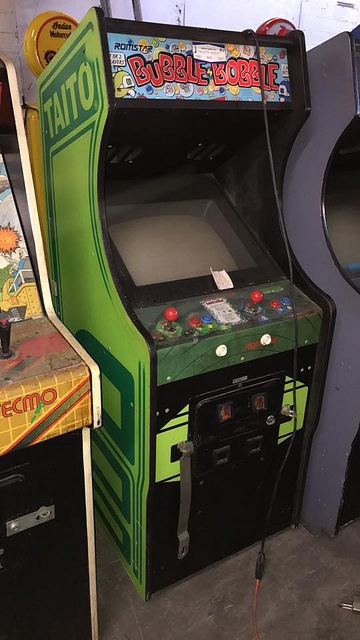 Pretty sure those green ones would have originally housed Qix from the factory.

Tapper was very recognisable as a dedicated cab. This one was butchered quite badly at some point. I give you Shadow Dancer in a Tapper cab: 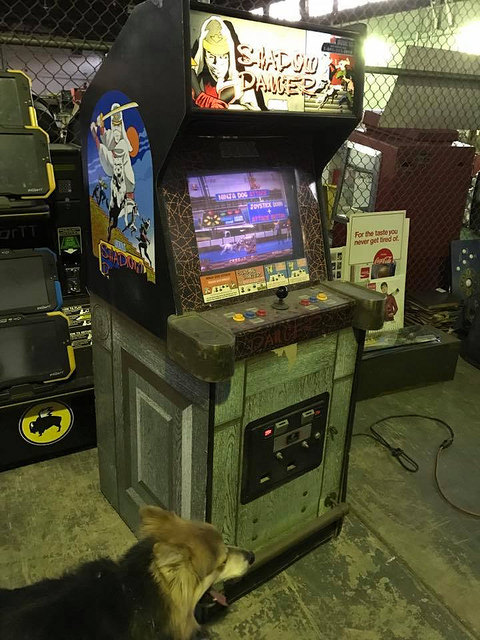 And someone decided that this Root Beer Tapper would be better off in life as an AmeriDarts game. Good Lord: 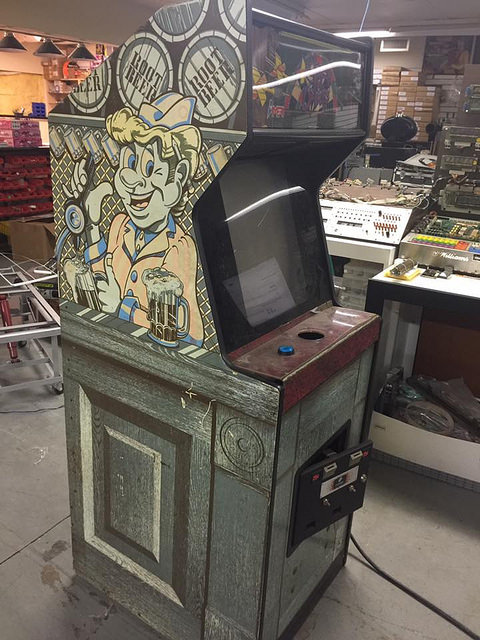 Let’s hope someone can get hold of that and convert it back to its former glory.

Despite now housing a Rastan game, this cocktail shows some evidence of its previous life as an Atari Asteroids Deluxe: 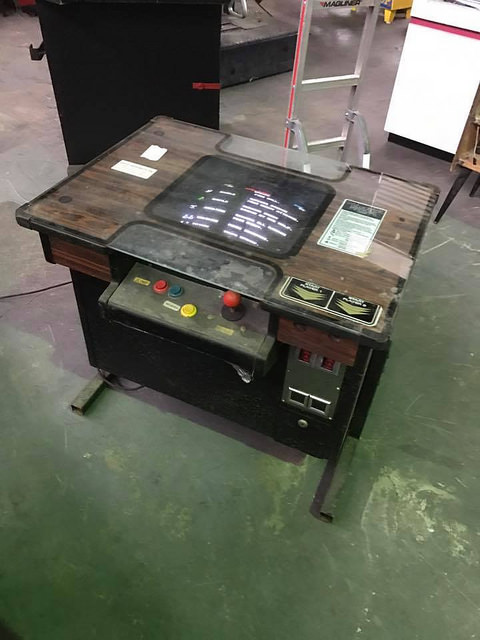 That would have taken some work.

A few more left. I thought these two were rather odd examples of Atari cabs. The first is a Centipede with a Dig Dug bezel and a Willis control panel overlay. Not quite a full conversion, but weird and noteworthy nonetheless:

Wonder what the story was there? Perhaps it was victim to an angry gamer fist through the original bezel.

And this Taito V-Ball was clearly once a Dig Dug upright! 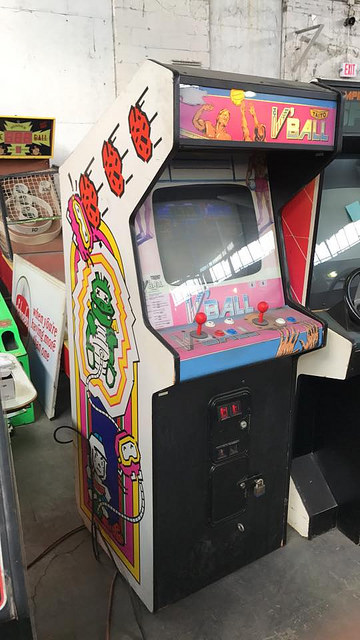 And finally, this unusual looking Jail Break cab was once a Gremlin Space Firebird: 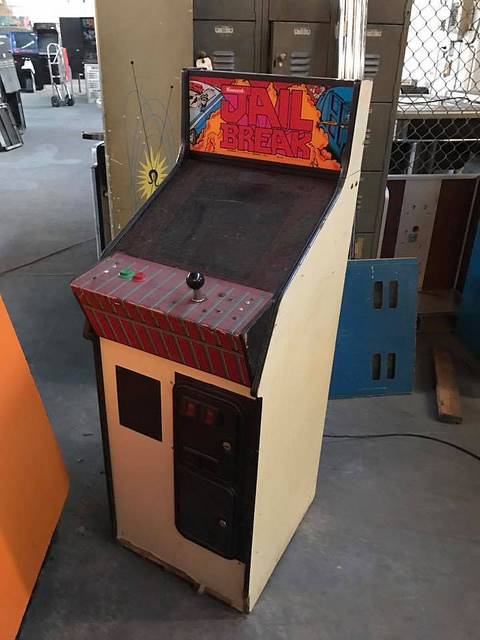 Notice the added control panel compared to how the original controls would have been laid out.

So what can we deduce from these pictures? Well I think there’s a few things worth pointing out:

I think these cabinets recall the history of an industry that was focused on revenue, and provide us with an interesting insight into the minds of arcade operators looking to make money at a point when the arcades were in decline.

All of the cabinets pictured on this page were discovered in the last couple of months in the USA. Many thanks to the team at Coin Op Warehouse for allowing me to share and write about these interesting conversions.

Thanks for stopping by this week. Please share this article using the social media buttons below!