On occasion I am fortunate enough to ‘go behind the scenes’ of this hobby. Over the years I’ve got to know a few arcade operators and owners of classic arcade machines, both here and stateside, and they’ve been good enough to allow me to view some of the stuff that’s out back. Invariably, from a collector’s point of view, this is the arcade paraphernalia that no-one else gets to see – usually because it’s too rare, unusual or valuable to be put out on the floor for the general public to use and abuse.

Mainstream cabinets that we all know and love like Asteroids, Centipede, Defender, Space Invaders and Pac-Man are all well and good, but it’s the more unusual cabs that get me really excited – and an opportunity to see some of the ‘holy grail’ classic arcade cabinets of the collecting scene doesn’t come up very often. You can bet your bottom dollar that commercial or private owners of large collections, usually have the really good stuff put away, out of sight.

Oliver Moazzezi is a well-regarded established collector here in the UK. If the name sounds familiar, you might recall he was the mastermind behind the audacious arcade raid on the cruise ship The Duke of Lancaster back in 2012. (If you’re unfamiliar with that story, do yourself a favour and go check it out when you’re done reading this – I wrote about that here). Known to most of us as Alpha1 on the forums, Oliver has an encyclopedic knowledge of classic arcade cabinets, and is widely regarded as one of the cornerstones of the community – always happy to help with parts, advice and tech help.

So when I got a call from him a few weeks back inviting me for a tour of his collection, I jumped at the chance. This was a great opportunity not to be missed, and one that I wanted to share with you this week.

When you consider that Oliver started collecting around 1997, it’s not hard to believe that he has amassed an amazing collection of just under a hundred cabinets. Much of his arcade stuff was secured some twenty years ago, when you could pick up what are now regarded as rare cabinets for as little as £100 apiece. But this hasn’t come without a huge ongoing challenge – where and how do you store such a large collection of arcade machines?

I was about to find out.

Along with video blogger Alex Crowley (Nintendo Arcade), the three of us jumped into my car and drove to the first of three storage areas rented by Oliver to house his burgeoning collection. We soon arrived at the first unit: 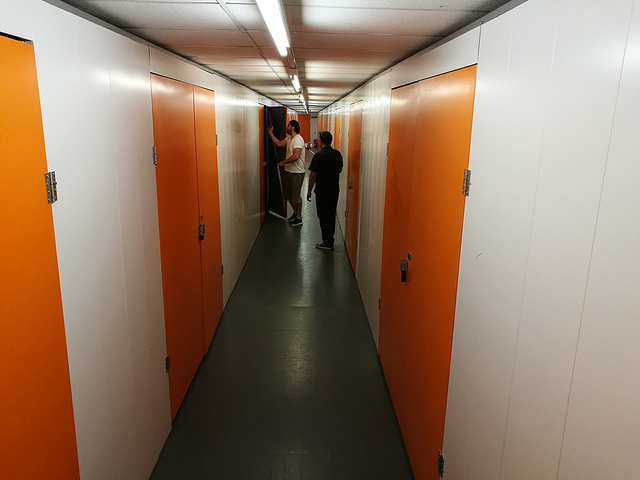 As our host wrestled with the locks, Alex and I gave each other a knowing look. We were about to see some very cool stuff.

How’s that for starters? When the first cabinet you see is an I,Robot, built at Atari’s Irish factory, you know you are in for a good day. I have never seen or played this cabinet before in the flesh. Dave Theurer’s masterpiece is a rare sight anywhere, let alone here in the UK. Oliver told us that this particular European cabinet was discovered outside of games distributor Deith Leisure’s facility here in the UK. It was basically a machine that couldn’t be sold, and left out to be scrapped back in 1994. Notice also the three Taito cabinets in that shot – this would become a common theme throughout the day. 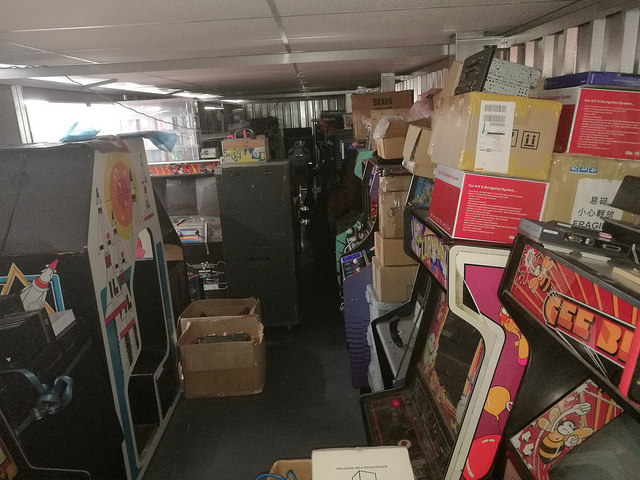 We pressed onwards through the unit stopping to admire the goodies as we walked. Here’s some of the rarer stuff we came across:

Of particular interest to me was this Missile Command sit-down cockpit. Less than 150 of these were built, and given their size and weight, there aren’t many of them about now. Housing a huge 25″ monitor and big subwoofer under the seat, this is THE version of Missile Command to play. I’d say there are less than ten left in the world:

Stunning. Here’s an unusual one – Sega’s Bomber. This Bronze Age cabinet was found in Belgium by another collector, but was left behind as no-one wanted it. When Oliver heard this, he was able to persuade the guy to go back and retrieve it. Here it is, now in safe hands:

Not a cab, but a very unusual Taito PCB test bench station. Notice the miniature steering wheels, joysticks and spinners!

This is believed to be the ONLY Sega Sheriff known to exist in the world:

This triple screen Tatsumi Buggy Boy holds fond memories for Oliver. He played it as a kid at his local arcade:

Cool story behind this cab – Oliver purchased this from someone who won it in a competition run by Sega. Home use only (obviously). This Super Zaxxon is like new:

Before we left this unit, Oliver and I sat and played this amazing modern cabinet – a dual screen sit down Darius Burst Chronicle Saviours. Coincidentally, I had just bought this on the Playstation 4. But this was the full arcade four-player shooter – it was a treat to play this huge beast:

We spent a good hour here, talking about the cabinets, and the stories behind most of them. Oliver knew the history of each cab – where and how he acquired them, how much he paid and what if anything he still needed to do to get them running.

It was hard to pull myself away from the unit, but Oliver promised even more surprises at the next location another short drive away. Although smaller, this space seemed to have more cabinets crammed in. If you’re a fan of the Atari classics, this will take your breath away!

As you can see, there was barely enough room to walk through this haul of cabinets. It was hard to know where to look first. Classic, rare titles were everywhere. I’ve tried to show the better stuff – but really, everything was worth stopping next to and taking in exactly what each represented, either in terms of its history or pure rarity:

Any one of those cabinets I would regard as a grail cabinet. These two are worth focusing on for a moment:

These two are worth pointing out too. On the left here is the only European Atari Gravitar known to exist, alongside a similar design Kangaroo, picked up from a haul in Germany:

More rarities from this room:

Another interesting item here. This is an Atari Computer Assisted Troubleshooter or CAT BOX. As the name suggests, it was used by field engineers to identify problems with non-working video game PCBs. It is fully working too:

Cast your mind back to the first pic I shared of the Irish I,Robot cabinet. Well, unbelievably, here’s two more. I don’t know why, but for some reason, I wasn’t surprised Oliver had more than one! (That Gottlieb Reactor is a nice find too)

We hung around here for a good hour chewing the fat and taking in the history around us: 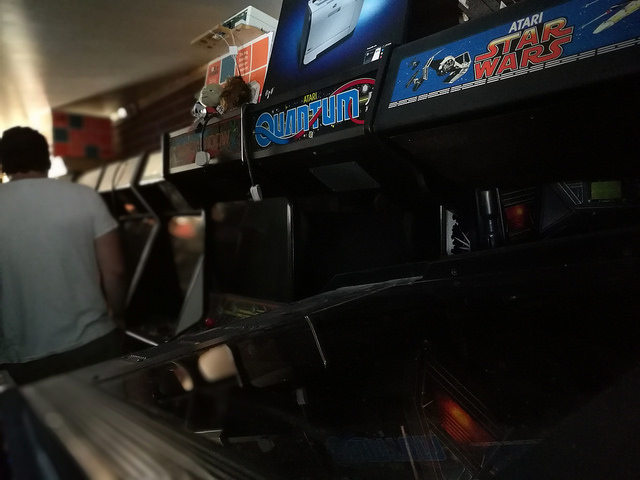 Before we left, a particular cab caught my eye. An Atari Arcade Classics upright: 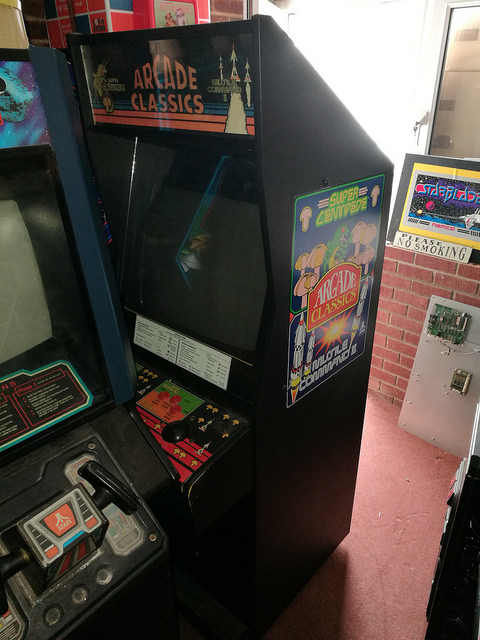 This cab had quite the story. One of just a handful built, this Arcade Classics cabinet was placed on location for field testing at an arcade in Luton in 1992. It runs reworked two-player versions of Centipede and Missile Command. During this time, Atari went bust, and instructions were sent to the arcade for the cab to be packed up ready to be flown back to Ireland to be destroyed. It made it as far as a holding warehouse at Luton Airport in England, where it remained until discovered and purchased by one of Oliver’s contacts in the early 2000’s.

One or two have turned up stateside, presumably built in Atari’s California facility, but this one remains the only known example left in Europe. It never saw a mainstream release and is therefore quite a piece of history:

There was still one more location to go. After stopping for some lunch and a pint, we made our way to the final storage unit:

Again, it’s hard to know exactly what to share here, as pretty much everything was worthy of attention. But here’s some of the cab highlights that I spotted amongst the mountain of parts and PCBs:

After rummaging around for a another hour or so, we made it back to Oliver’s home arcade room. Here, he is able to rotate the cabinets with those he has in storage. As you’d expect, there were some lovely examples. A particular highlight for me was this stunning Namco Galaga. Privately owned by an operator and originally sourced directly from Namco, you will be hard-pressed to see another example in the flesh. Check out the art on this:

And this mint Atari Food Fight. A really unique-looking cabinet this:

Without question, Oliver’s collection is the most unusual, varied and mind-blowing I’ve ever come across. Driving home, it struck me that what makes Oliver so unique, aside from the volume and individual rarity of his cabinets, is that he has saved so many pieces of arcade history that other collectors would simply pass by. Atari SUBS, Sega Bomber, umpteen Taito cabinets – this isn’t usual collector fodder. But what all of it represents are snapshots of time, important enough as far as Oliver is concerned, to go the extra mile to find, secure, and placed somewhere safe.

His is an eclectic collection, curated by a guy who is nothing but passionate about arcade history; and if it wasn’t for him, much of this stuff would have remained unloved and destroyed – gone forever in physical playable form, and largely forgotten aside from perhaps a few flyers and documents. And for me, this far outweighs any thoughts that Oliver is “hoarding”. A good majority of cabinets that we saw on the day, very much fell into the category of “saved”. There is no question, that the majority of this collection would be dust by now, had Oliver not found the cabinets and grabbed them.

But what of the long-term? Oliver is acutely aware that having his collection stashed away in storage is far from ideal – not to mention the ongoing monthly costs of doing so. Well, his long-term goal is to move to a house with land, and to build a barn to house his cabinets, and to make them available during the summer months to play, to a select group of like-minded collectors. Perhaps a fee could be charged to help with maintenance and restoration costs. I’m really looking forward to seeing that day arrive – and let’s hope it happens soon, so we can get a proper look at everything!

I mentioned earlier my mate Alex who joined us – he’s pulled together a video of our day with Oliver as part of his Game Room Tour series on YouTube, which you should definitely check out, as it shows many more cabinets that space simply hasn’t allowed me to share here, and Oliver gives a lot of additional detail about each cabinet:

We had such a great day – lots of laughs, cool stories and genuinely jaw-dropping moments. I feel privileged to have had an opportunity to go behind the curtain to see one the world’s best collections of arcade cabinets, PCBs and memorabilia.

I want to thank Oliver for allowing Alex and I to trawl over his stuff, to be able share it with you all. The simple fact is that if it wasn’t for guys like him, so much of our arcade history would not be here. Thanks again mate.

So you’re going to have to excuse me now – I’m off to see if I can prize one of those I,Robot cabinets away from him.

Thanks as always for stopping by Arcade Blogger. If you haven’t done so already, you can subscribe for future updates below.