You’ll recall the arcade raid story I told a few weeks back about the haul of cabs we rescued from an abandoned house in rural France. Well this cab was my keepsake from that adventure.

The cabinet made its way back to England in another collector’s van, and I had to pick it up from my friend Steve’s lockup in Bedfordshire. When arriving at his place the following week, we discovered (in the pouring rain no less) that the damned thing was one centimetre too deep to fit in my SUV! I left empty-handed, wet through and rather annoyed with myself. Luckily Steve was passing my town a few days later on his way to pick up another cabinet with a van, so was able to drop the Steeplechase off to me then. Thank you Steve!

Originally titled AstroTurf, Atari’s Steeplechase was released in 1975. I suppose it is best described as a rhythm-based horse racing game. Played by up to six people, each has a single button that has to be pressed with precise timing to jump over fences and gates that approach the player’s horse with increasing speed. Player 7 is computer controlled (makes perfect jumps, but moves slower). First past the finishing line wins the game.

The game is in fact in black & white. Coloured gels on-screen make the players easier to separate, and the corresponding buttons are lit up to match the on-screen colours. Think Track & Field meets Guitar Hero and you get the general idea.

It’s certainly very rudimentary, but as a party game amongst a group of friends, it is a lot of fun. Indeed, talking to a UK-based operator recently, he remembers the game as his best performing video game ever during the seventies. Why? because you could set up the coin system so that every player had to put a coin in the machine to play. Which of course means multiple coins per game, rather than just the usual one per play.

I’ve never seen one of these cabs in the flesh before, and there are now very very few about. That said, a group of German collectors own the US version of this arcade game. Here’s their gameplay video to give you a better idea of how to play:

The cabinet in that video is the more common US production model. Housed in a traditional square-shaped cabinet, it sold for $1,095 back in 1975. Here’s the flyer: 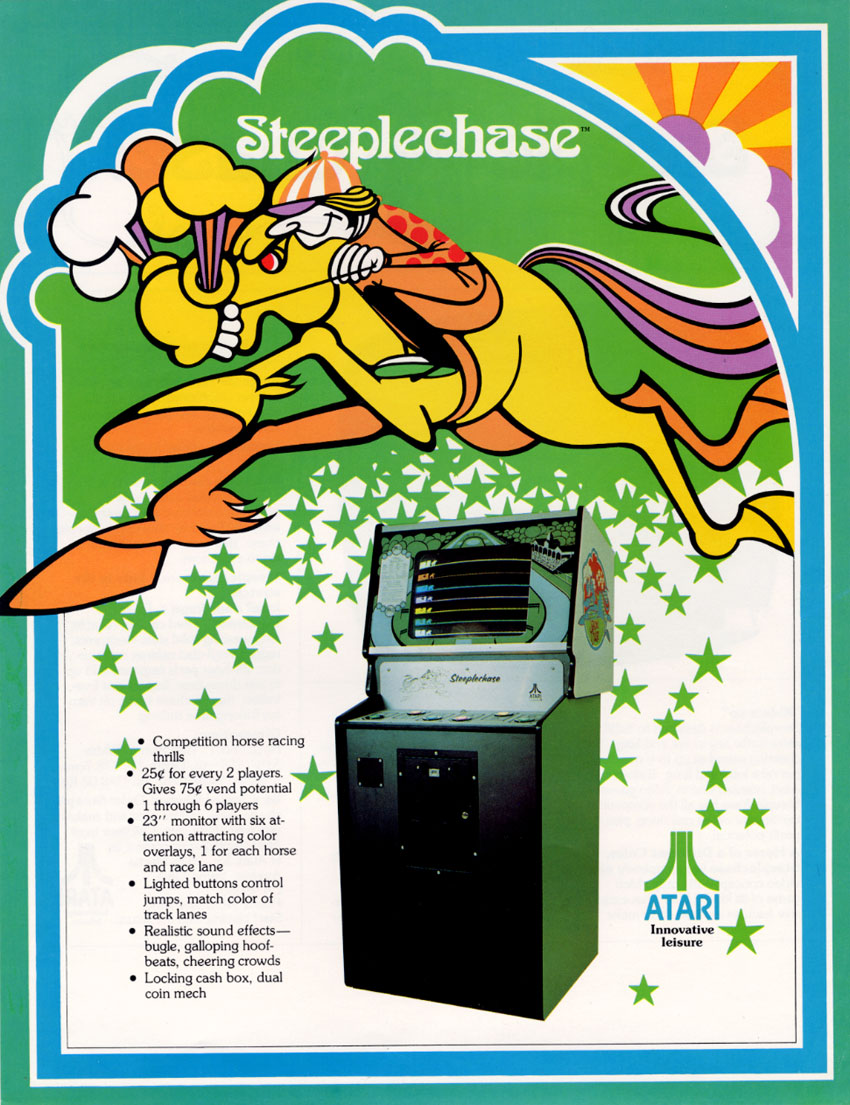 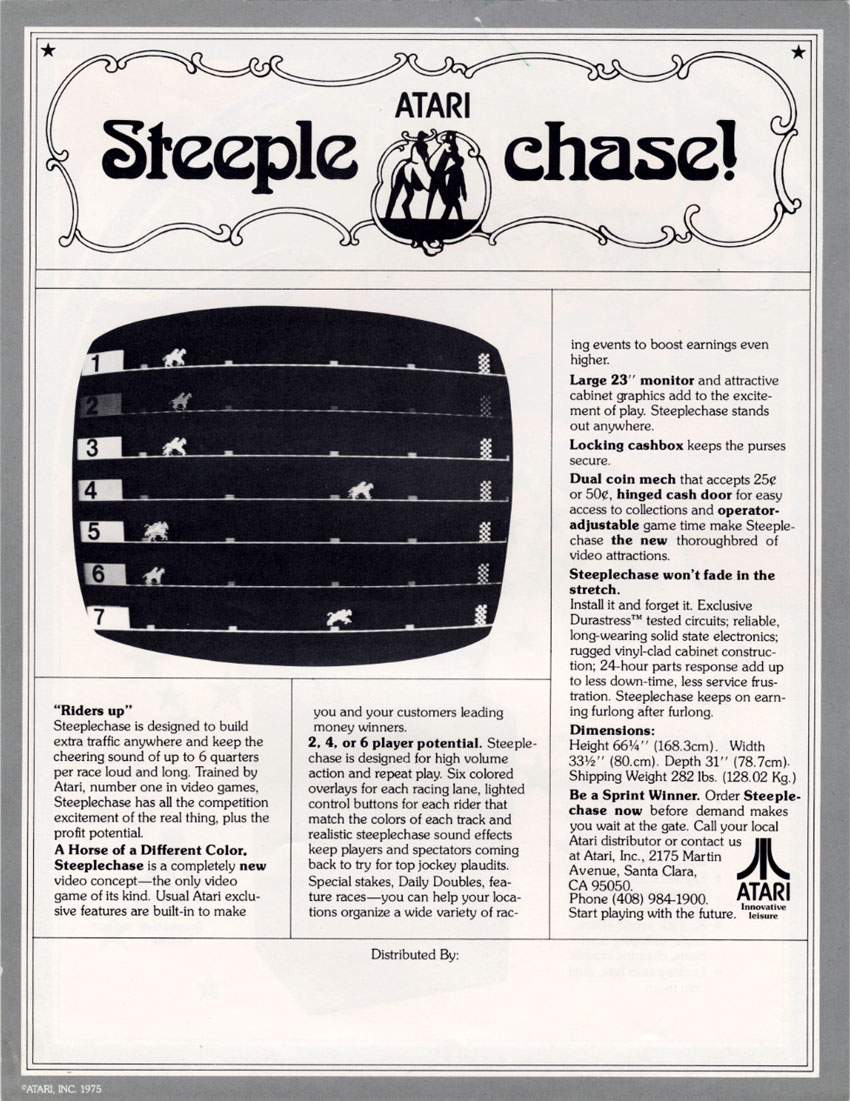 The game found its way to European shores also, and was popular in the German, Italian and French markets. Taking a close look at the German flyer, you can see pictured a more stylish curved cabinet, here, top left:

This was Atari France’s take on the design. The cabinet was built in the French town of Baume-les-Dames by Socodimex, the company responsible for building Seeburg’s jukeboxes. Atari purchased a 50% stake in the business in the second half of 1974, and they were soon producing cabinets housing Atari’s video game titles under the branding of Atari Europe. Actual numbers are impossible to come by, but it would be fair to assume that production of Steeplechase would have been in the hundreds rather than thousands.

The cabinet is huge (as I found out), and this would not have helped its longevity sadly. These bronze-age cabinets were usually destroyed once they met their shelf-life – converting them to other games wasn’t really a thing back then, so to find one in complete condition these days is a rare occurrence.

But find one we did. Here’s the state of the cab in the abandoned house earlier this year:

The poor cab had been through a lot. As well as surviving a 30 year exile in the house, it had suffered damage to the top due to the ceiling above collapsing! There was general talk of leaving the cabinet where it was due to its size and weight, but the more I looked at it, the more I wanted to save this piece of arcade history.

So here it is on arrival at Arcade Blogger towers:

The control panel is in surprisingly good shape, and appears to be complete:

First things first, I needed to get the thing clean before working on it. It was covered in a good layer of muck and dust having sat unmoved for decades. Three buckets of hot soapy water later, and things were looking a lot better: 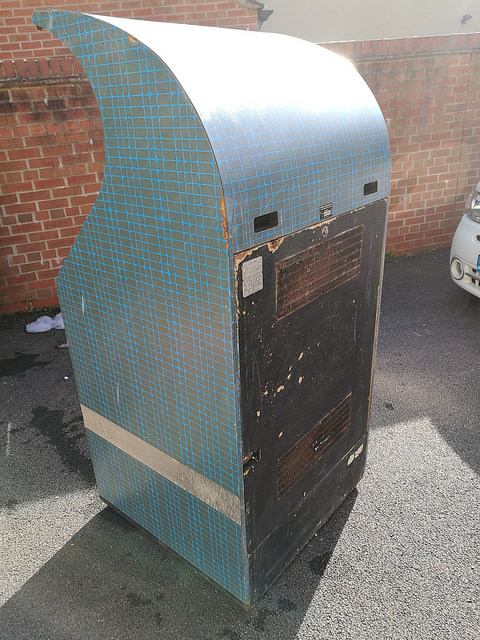 Notice the cool names for the six horses:

None of those translate very well into English, so presumably they were popular French racing horses? Who knows.

Prizing open the back door revealed some unpleasant white mould covering everything:

I carefully wiped everything with boiling hot water and bleach, then gave the surfaces a spray with anti-bacterial detergent.

Looking around, everything appears to be there:

The PCB and transformer look almost like new. Not bad considering this cabinet is now 42 years old.

Bizarrely, there were two monitor chassis inside. I’m guessing one was just stored in there when the cab was put into storage. Both look shot to me. I think the bottom one is the original.

The tube is still inside the cabinet, but I’m almost certain I’m going to have to find a new black & white monitor. Time will tell how easy that will be.

So with everything cleaned up, I left the cab to dry out in the afternoon sun:

One point of note, the game was originally supposed to be called AstroTurf and the PCB is still marked as such:

Here’s the original French instructions, and  close up of some of the glorious artwork:

So there we go. The cab in is the garage for now, while I make enquiries about a replacement monitor. At some point I’ll take a look at the damaged top part. I also need to cut a new back door – the old one is disintegrating quite badly.