I started to think about what else I’d need to get these cabs into shape. There was more drama when a coin door arrived from the USA with several parts missing. Major props are due to the nice folk at USPS Colorado for throwing my package around some sorting depot in Denver and losing all the bolts and coin mechanisms.

Fast forward a few months. Real life had taken over again, and I’d done nothing significant with the cab at all. (This was my “useless at finishing things” trait coming out). I found myself in the USA on vacation. I’d made a note of the paint type I’d need, and figured I could pick some up while I was over there. I found a Home Depot store in Nashua, New Hampshire; walked up to the paint counter and told Jean that I’d like a litre of Sapphire Sparkle Blue Paint by Behr Paints.

She had no idea what I was talking about. After much discussion, she finally figured out that the paint had to be mixed in store. After a multitude of questions about what viscosity and finish I wanted, she finally started concocting her witches brew of colours and the paint began to be stirred by the machine. Of course I had no clue about finishes and viscosities. I smiled and said “yes please” to every question.

Jean then decided to tell me her life story, focussing particularly on her visit to Stonehenge back in 1965. She asked me if I knew London. Oh and what about Princess Diana? I was respectful, and feigned interest for as long as I could whilst pretending to look at paint brushes like my life depended on it. Finally the paint was ready and Jean insisted on walking me to the tills and introduced me to the bemused woman holding the scanner, as if I’d never experienced the world of commerce before. “This is Tony. He’s from England you know,” she said. I looked at checkout lady. Checkout lady looked at me. I felt a blip in the Matrix.

It was an odd moment, but one of many during my trips to the US. (Walmart, now there’s a hotbed of all sorts of weirdness – perhaps I’ll write about that next time). So after I was told for the umpteenth time that day to “have a nice day”, I took my paint and was pleased that I’d managed to source the authentic paint mix from the very store recommended by the guys at Thisoldgame. Out in the car park I distinctly remember trying to get into several SUVs that looked exactly like the one I’d hired. That was fun. How do Americans even find their own cars?

The weirdness continued. I thought that the best way to get the paint back to the UK was to send it to myself rather than carry it on a plane what with the liquid restrictions that had been introduced on transatlantic flights. I found a local UPS centre in Nashua, walked in and enquired about sending my small tin of non toxic water based blue paint to the UK.

You’d have thought I was Osama Bin Laden walking in with a tin of volatile plutonium. The UPS man looked visibly shaken that I’d asked him for advice about my paint. “You can’t send that Sir. We won’t touch it”. And sure enough, he wouldn’t touch it. In fact he could barely bring himself to look at it. 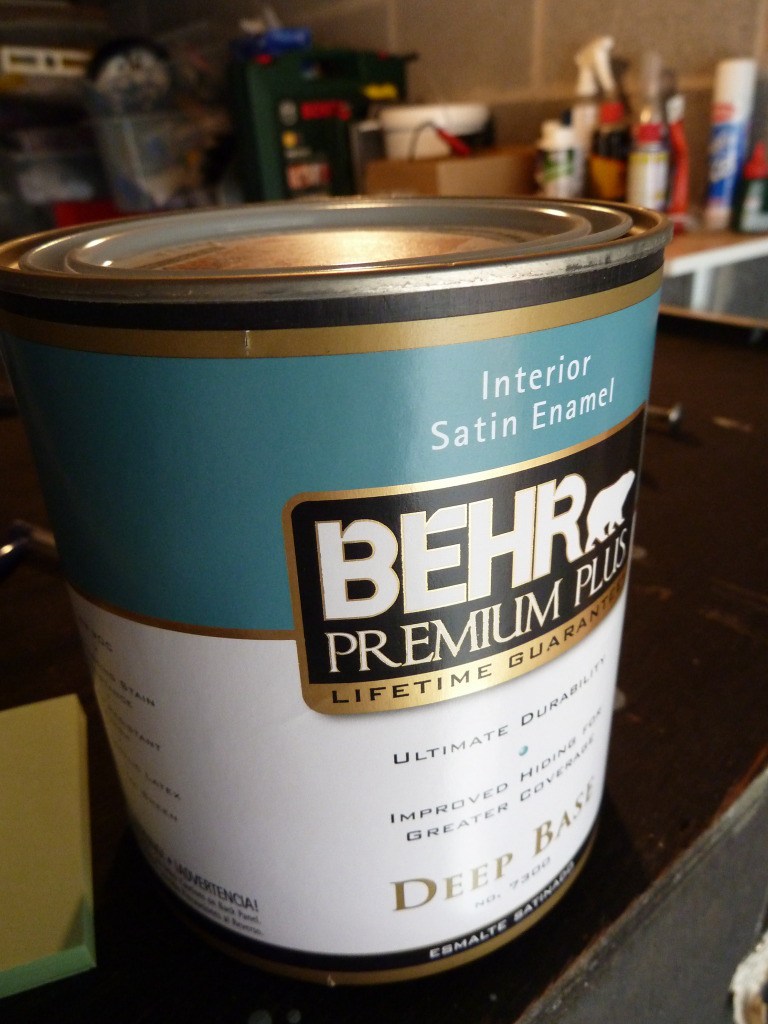 That went down well. He remained firm and unhelpful.

I sought out the local post office also and enquired there. Same answer. “It’s not us Sir, it’s the Airlines. They won’t allow paint on their planes”. I found this hard to believe, so decided I should call American Airlines myself.

You can probably guess the rest. After 30 minutes on the phone in America to some call centre in Mexico from my UK cell phone, I was still none the wiser (oh and had built up a phone bill that required a second mortgage when I got back home). Three people gave me three different pieces of “advice”. Not helpful. So in the end I thought what the hell, and put it in my hold case, wrapped in a plastic bag and duct tape.

It was only when I got home that I realised that this little package had an uncanny resemblance to a pipe bomb of some sort. And sure enough, the locks had been broken on my bag, and there was a note placed in my luggage from the US Homeland Security TSA people advising me that they had entered my bag, as was their right. They’d torn open the plastic wrapping, opened up the tin, looked inside and put it all back in my case unscathed. I guess it showed up as a liquid on an x-ray?

Whoops. I guess I was lucky that they didn’t confiscate the paint. Anyway – no point dwelling on it – another hurdle was overcome! We had paint – and more importantly, the correct shade – Sapphire Sparkle by Behr.

So back home, it was clear that I had to start actually doing something to get the cab ready for the paint. I did some reading and decided the first thing to do was to fill the holes in the cab. And there were lots. Bondo is a messy product. Don’t do what I did and mix the entire lot in one go (no laughing at the back please). It only stays supple for about 5 minutes. After this time you are left with a solid lump of useless gunk.

So two tubs of Bondo later, I was ready to sand down the sides to a smooth finish. The voices in my head told me that the best place to do this messy job would be on our back lawn. When The Warden arrived home and saw that her garden had taken on a rather attractive shade of light blue sparkly paint flecks, she wasn’t quite as enthusiastic as I was about the sanding. To this day, we still pick off tiny flakes of light blue paint from the carpet in the house, and from between the kids’ toes. 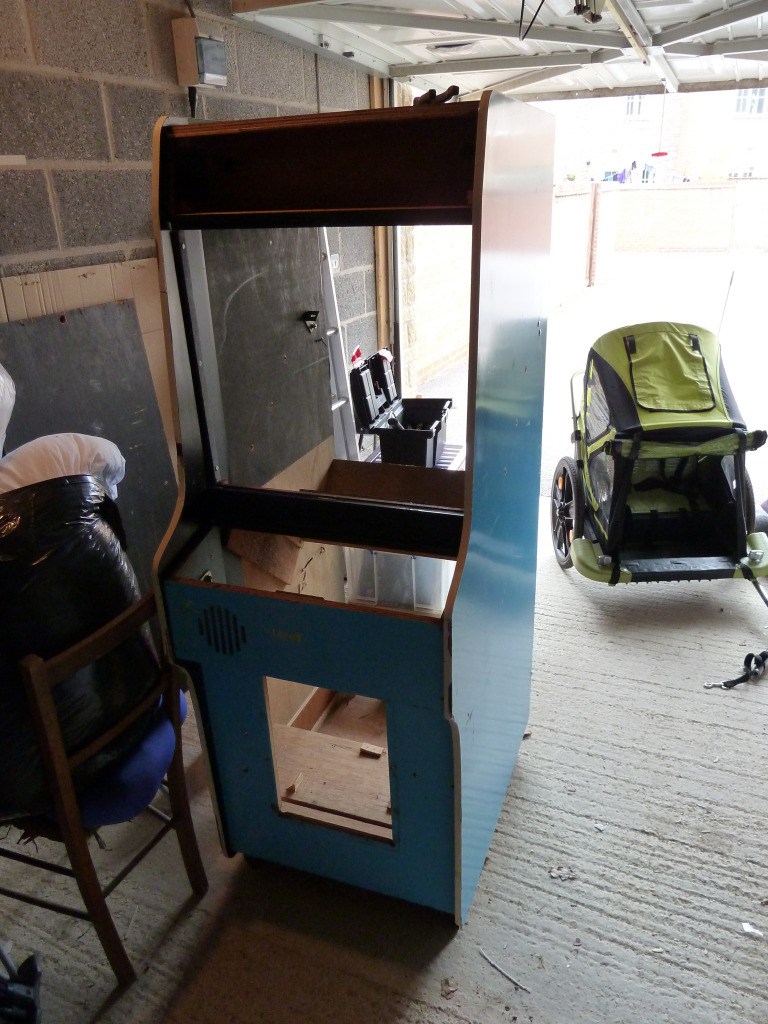 I tried to explain to The Warden what collateral damage meant, but she wasn’t buying it. Honestly, she just doesn’t understand what it’s like to be a serious classic arcade cabinet restorer. Mind you neither did I to be fair.

So, one coat of white undercoat paint later, the cab was ready for it’s first lick of Sapphire Sparkle blue paint. After much reading on the web, it appeared there were two choices here – spraying the paint on would give the smoothest most authentic result. It also requires a certain amount of skill, which in case you’ve not already established, I don’t have much of. So that option was out. The alternative was using a small roller. I decided this would be the route to take. Painting was never my forte – The Warden has a better eye than me for this sort of thing. (Yeah I did try asking, but after the back lawn incident, she had washed her hands of the whole project by this stage and wanted no part of it). I figured it couldn’t be that difficult, so armed with paint that had travelled over 3,000 miles, several sheets of light sandpaper, a tray and a small roller, I made a start transforming the cab. I figured I should be meticulous. It was a huge mountain to climb, but I was determined to conquer the task ahead. 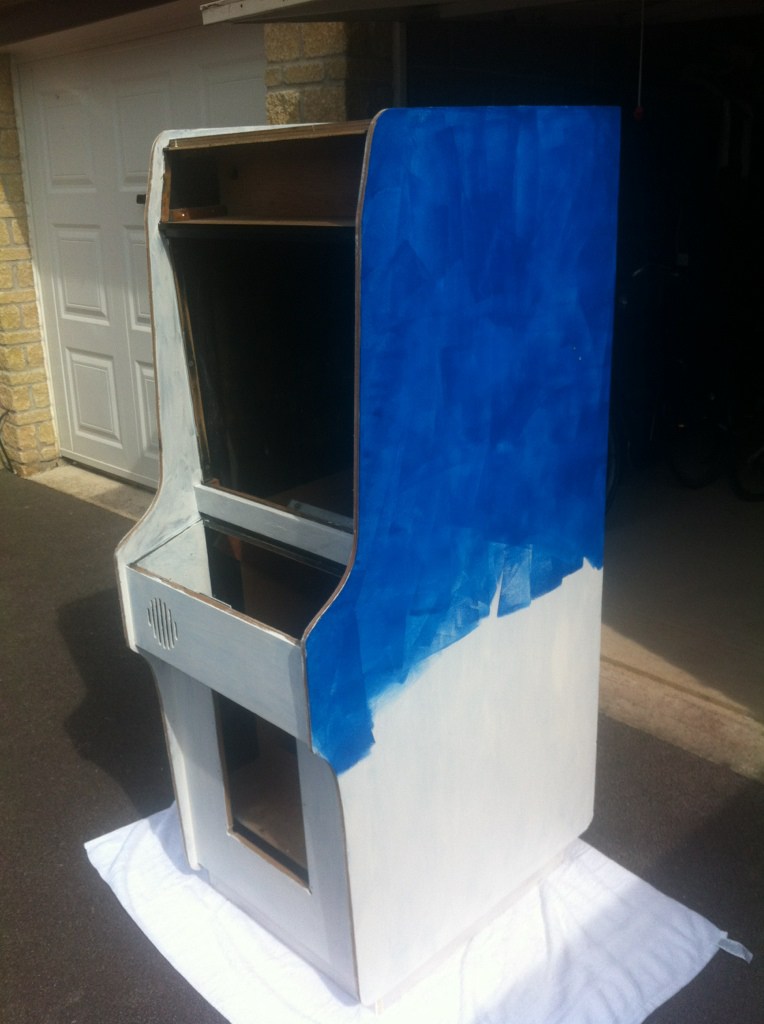 That was coat number one. Two more to go I figured. And so one whole summer afternoon and three coats of Sapphire Sparkle later, I stepped back and admired my handy work.

Not bad. Not bad at all. For the first time during the process, I had a feeling in my gut that this project would get finished – it actually started to look like an arcade cab! There were small parts of the cab that required black paint – both gloss and matt. I cracked these parts off in short order, and started to have a bit of swagger now – this cab wasn’t going to beat me. I powered through the painting, and left the cab to dry in the garage. With hindsight, the painting I suppose was the easy part of the process. I was now faced with the various components of the cab. Wires, plugs, transformers, capacitors, joysticks, buttons, PCBs. Many of these were old and worn and needed cleaning, restoring, repairing in some cases, and piecing back together again – together with the new pieces of artwork to turn this cabinet into a Donkey Kong 2.

Now of course you didn’t expect me to meticulously label everything that I’d taken off the cab months previously did you? No of course not. Just checking. So there I was, in the garage, staring at a pile of junk parts. I had no idea what most of it did, or where in the cab it came from. Internet to the rescue again. Bit by bit, piece by piece, I identified what most of this stuff was and where it went. Surprisingly, the more you tinker with arcade parts, the more you understand. Something as simple as a joystick is actually quite complex, and as you disassemble one, it becomes clear what goes where, and why springs are where they are etc. 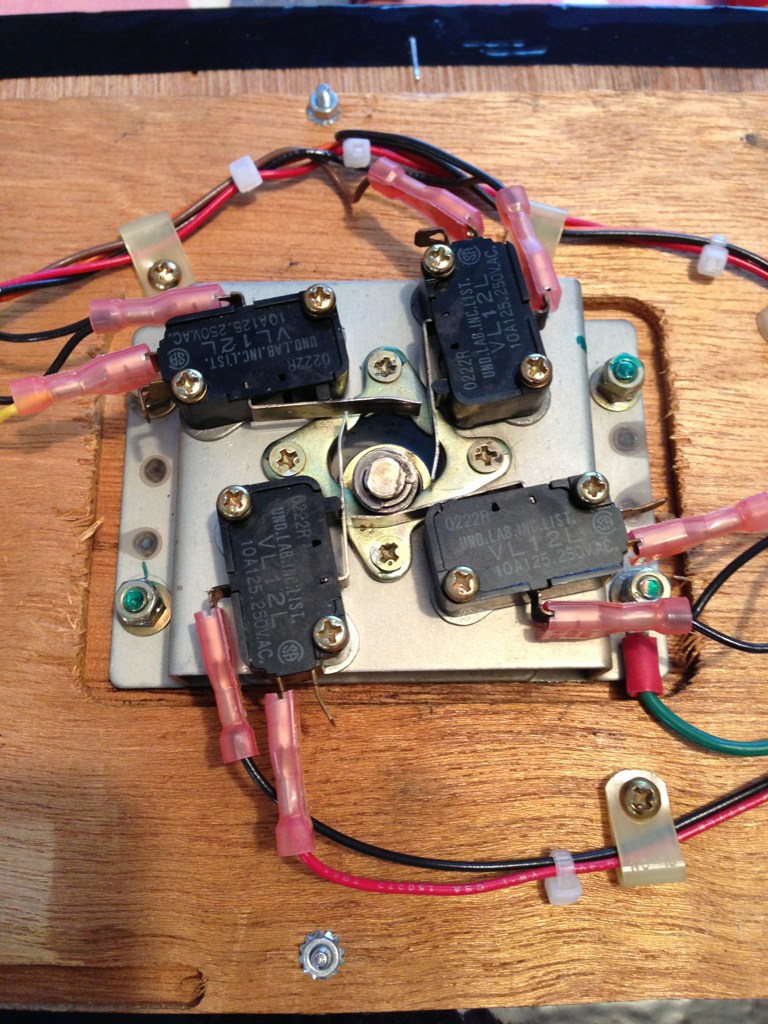 My confidence grew further. When the coast was clear, I took apart the control panel, scrubbed the 30 year old gamer grime from the base of it in the kitchen sink (ewwww) – this was long after The Warden had long previously disappeared to watch that week’s episode of Homeland (thanks HBO!). Then dried it out, and started to repopulate it with my scrubbed joystick, new artwork, and new buttons . More money!

I was spurred on by the sight of my shiny new control panel. It all started looking a bit real and I felt in my gut that I was going to finish this thing and end up with something I was going to be really proud of.