Working with limited technical hardware, the arcade manufacturers of the 80’s had to think outside of the box. Constantly delivering commercially successful immersive experiences to a demanding and fickle public was no easy task. Graphics, game play, sounds, artwork, controls and hardware all played an important part in making sure that operators took money in the machines they chose to buy and put out onto the arcade floor. This was not an exact science – if it had been, then every game would have been a huge success. But many fell by the wayside almost as soon as they were released. An “X Factor” brew of these components are what gave the handful of memorable arcade games their all-time “classic” status.

Cabinet design for the most part was about giving operators some purchasing options. A cocktail table suited certain environments like cafes and bars. Cabaret machines gave arcade owners the opportunity to squeeze more cabinets into limited floor spaces. But of course the full upright versions of machines were the ones to play – typically with full on artwork and larger screens, these were the icons of the 70s and 80s arcade world, the ones that we remember so fondly.

But one style of arcade cabinet certainly wasn’t about the operators. It was about the player. Cockpit (or “Environmental”) cabinets were about giving players a supposedly deeper, more immersive experience. Given the limitations of the tech available at the time, delivering this was not an easy thing for manufacturers to do. But this was the 80s, and cracking a nut with a hydraulic piledriver was not uncommon. In short, cockpit machines made a statement; they were bigger, louder and brasher: Outrageous, in-your-face hurrahs designed to amaze players and put them right inside the heart of the action. They screamed “PLAY ME”. 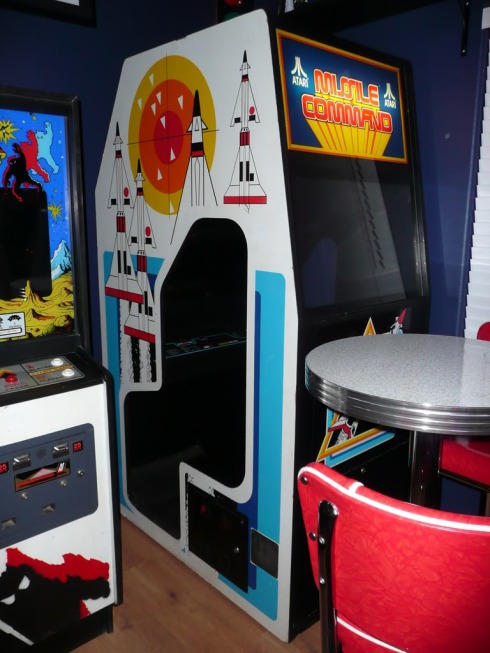 For operators they were deeply impractical, as you can see from the example above. Their footprint, weight and size would be two to three times the size of their standard upright brethren, and would usually come with an appropriate increase in cost to purchase. But with the lure of the enhanced player experience, came the promise of greater earnings, and they were seen as a product worth taking on despite the extra up front investment and increased floorspace requirement in an arcade.

Enclosing the player within a wooden behemoth of wood and metal, and assaulting their senses with a huge screen and sound effects, the point was to remove the outside world – a form of virtual reality without the headset, if you will. Atari really pioneered the concept. These images courtesy of atarigames.com, show the early design stages of a cockpit prototype in development at Atari HQ: 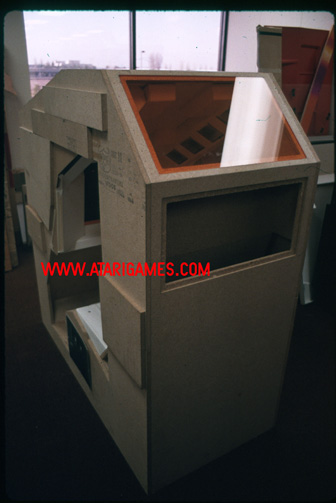 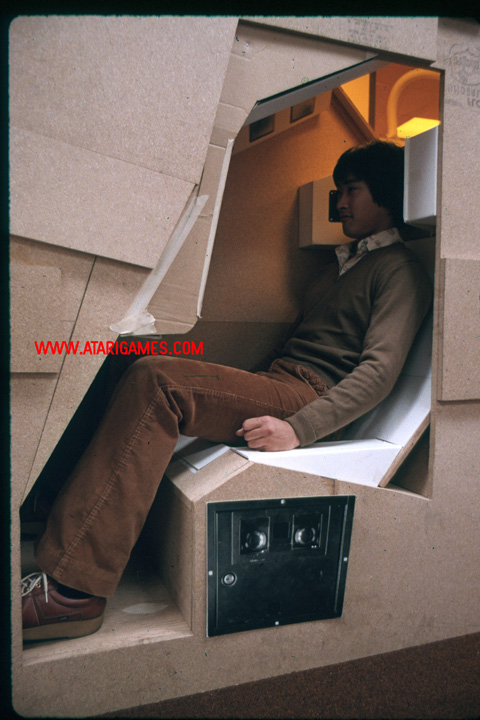 What’s interesting looking back at the finished designs now, is that you realise only certain games were considered for such a gargantuan design effort. You never saw something like a Dig Dug, a Centipede or a Kangaroo in cockpit form. A cockpit release was really only reserved for games that bordered on simulation. Driving games and shoot ’em ups were typically given this treatment – and even then only for a limited selection of titles. And when you take a look at these games, it sort of makes sense that those select titles were chosen. Let’s take a look at a few.

Some of the earliest examples of cockpit machines were made by Atari in the 70s. Night Driver was one of the first, and this adaptation of driving cockpit style cabs continued into the 80s. Here are a couple of rare pictures of a prototype design for what would become Pole Position: 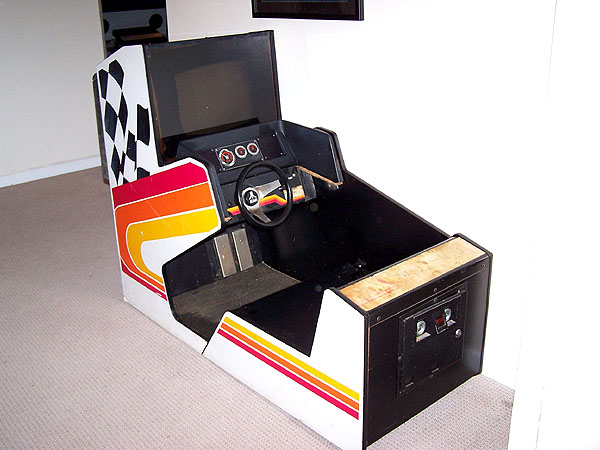 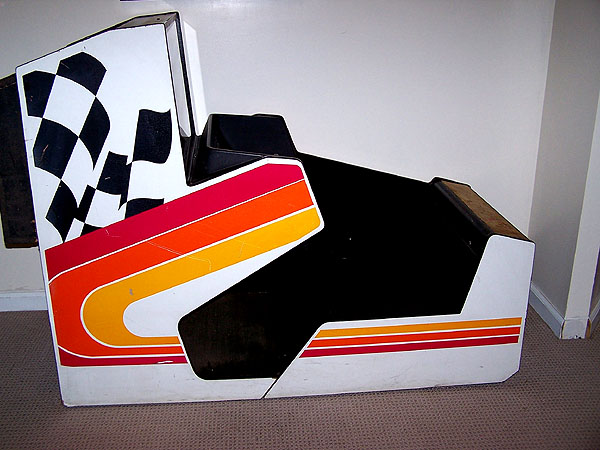 Despite this awesome design, at some point Atari decided to enclose the player fully and came up with a different environmental cabinet. Here, Atari’s Pole Position and Pole Position 2 share the same design: 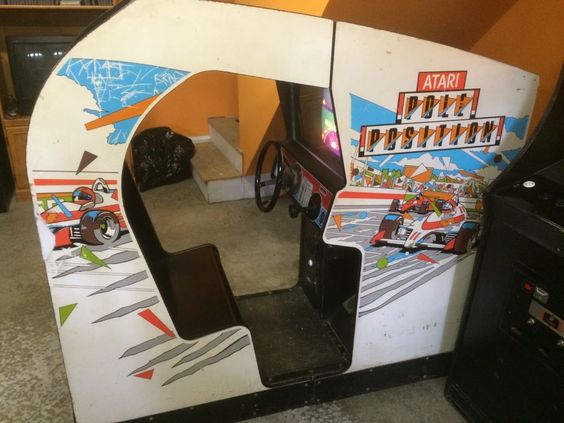 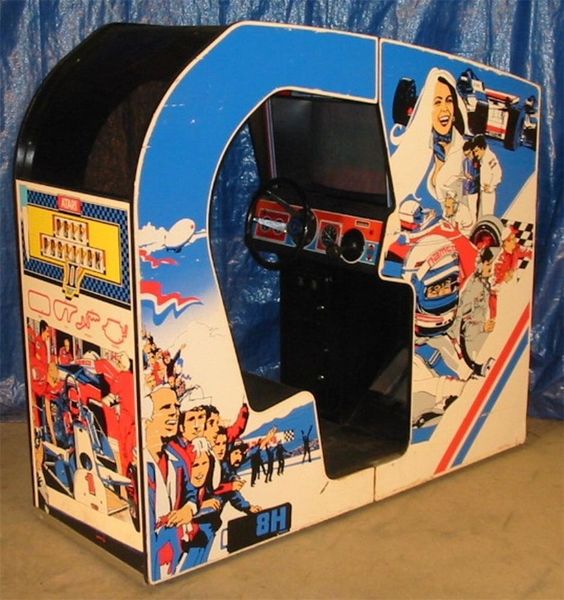 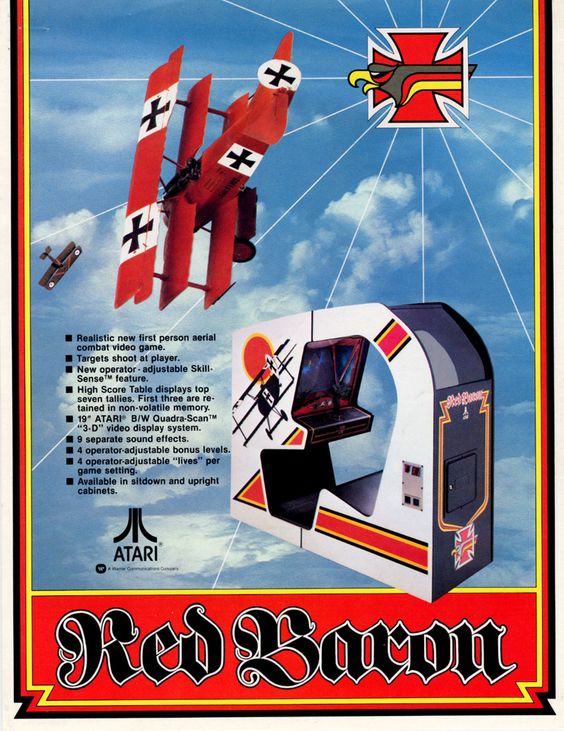 The most desirable of all cockpit machines has to be Atari’s Star Wars. Encasing the player in a futuristic shaped sit down cabinet adds to the experience. Throw into the mix stereo sound and a 25″ Ampliphone vector monitor, and you moved the player from a game to an experience. Playing one of these is a rite of passage for any discerning fan of classic arcade machines: 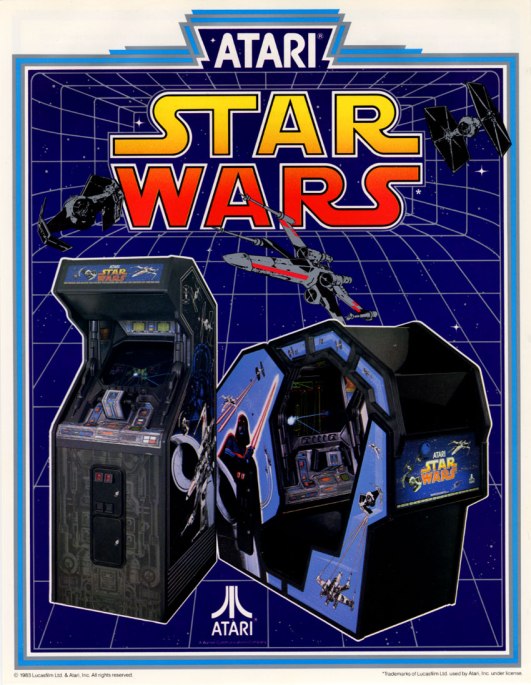 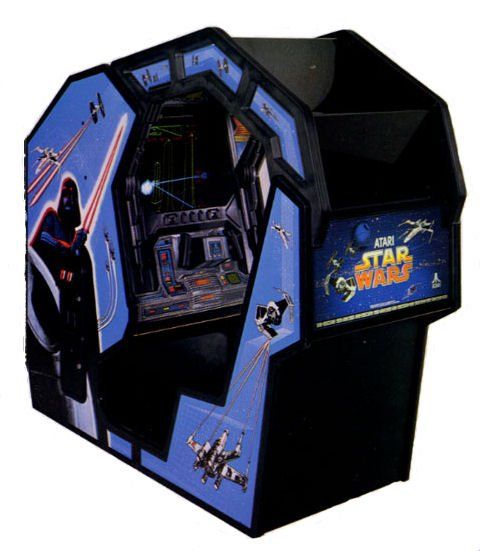 Continuing with Atari for a moment, let’s move onto 1984’s laser disc game Firefox. As Atari’s only foray into the world of laser disc games, it included video footage from the film itself, and a voice-over provided by Clint Eastwood, the movie’s star. Firefox was dogged with technical issues which made its release a complete disaster. The games broke down almost as soon as they were sent out from the factory, and only a handful of examples exist today. It was way ahead of its time, and sadly, the laser disc players simply weren’t reliable. I think we can forgive Atari that, given they provided us with a fabulously stylish cockpit for the game: 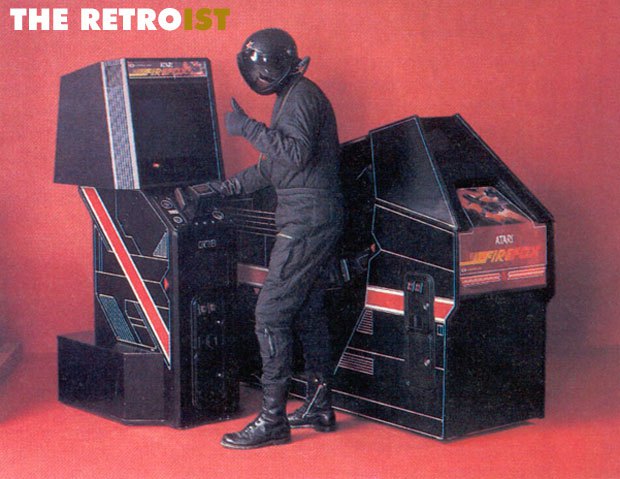 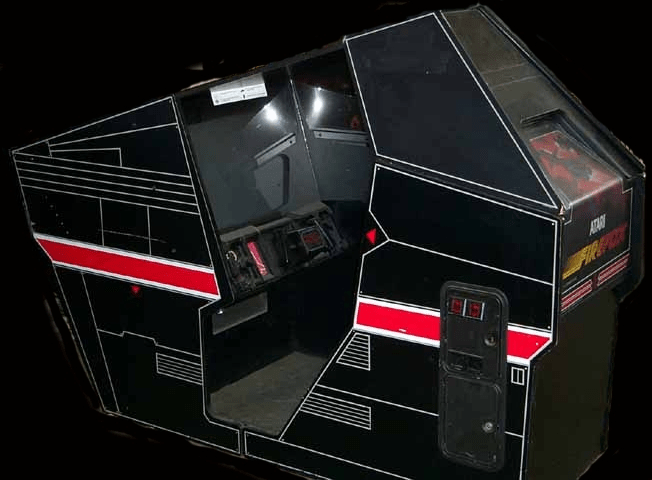 Discs of Tron was a Midway game based on the film Tron. Game play is so-so, but the cabinet design and accompanying artwork more than made up for that. The game was marked for a cockpit release, and given the moniker EDOT (Environmental Discs Of Tron). The cabinet is absolutely stunning: 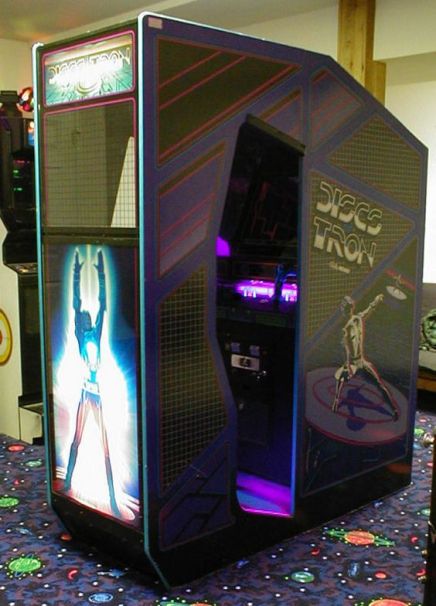 If you ever see one of these, go play it. In the UK, there are just 5 known examples of this cab left. The lighting, artwork and immersion is something to behold. Examples command a real premium among collectors. John’s Arcade has a great video about this cab on YouTube which is worth a watch.

Funai is not a well-known video game company, but their Inter Stellar game was released in impressive cockpit form. I’ve featured this cabinet on the blog before as it was actually conceptualised and designed by Atari: 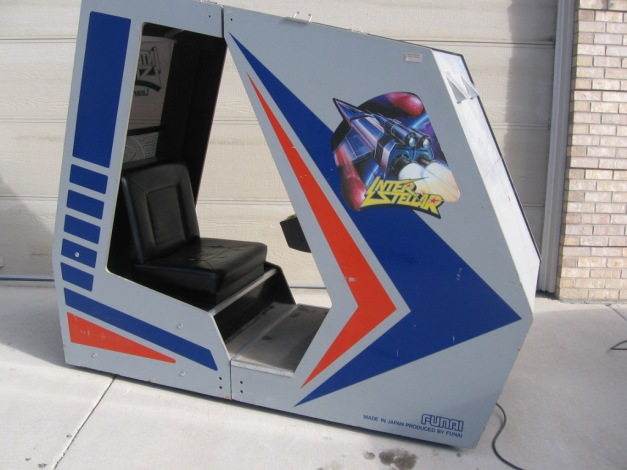 Williams produced a mean looking cockpit for two titles, Sinistar and Blaster. Looking like something straight out of Mad Max, these cabs are super rare today: 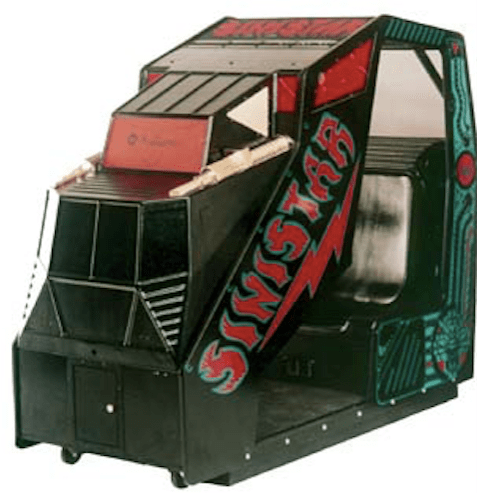 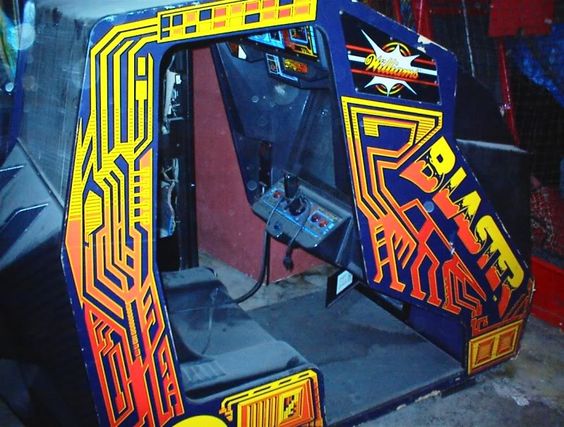 Gameplay of these Williams titles really match that design somehow – tough as nails both of them.

Sega got in on the act over the years with several cockpit releases. 1980’s Space Tactics and Atari-licenced Missile Command shared almost identical designs: 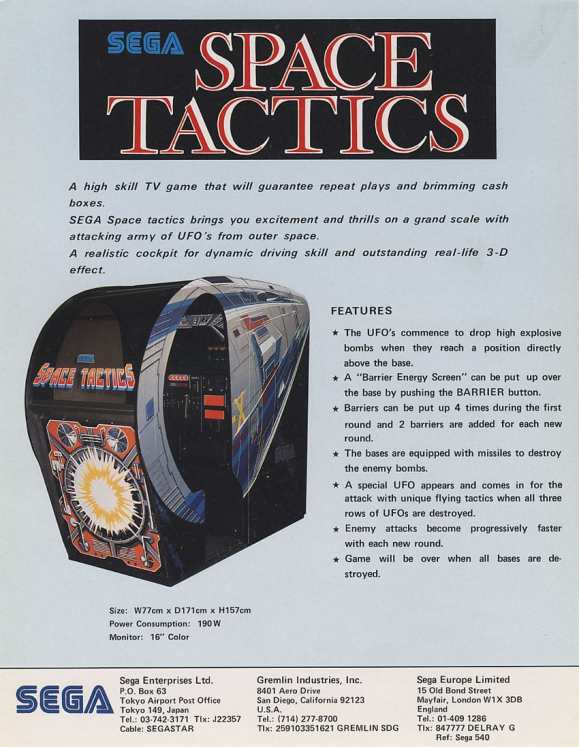 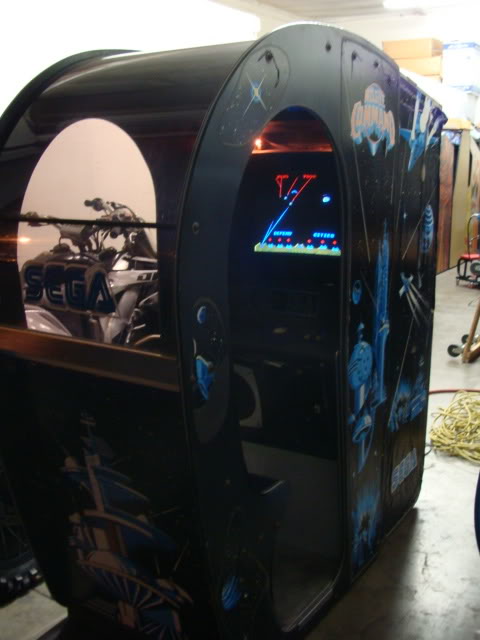 Cool design that. Notice the 2.5″ trackball and huge speaker.

A few years later, Sega’s vector Star Trek was given this unique design: 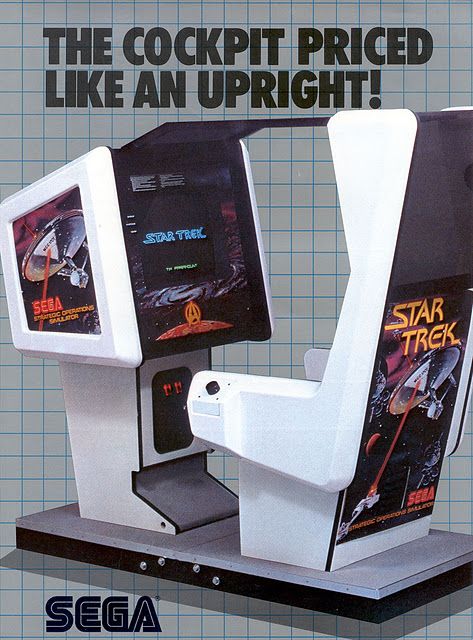 Notice the lack of a traditional joystick control. If you’ve ever played one of these, you’ll know that the controls are in the arms of the seat. This gave the player the feeling of being sat in the “Captains Chair” controlling the game.

One of the nicer looking cockpits was Midway’s Omega Race. Released in 1981 this vector title takes Asteroids game play and looks, and adapts it to a futuristic shooter: 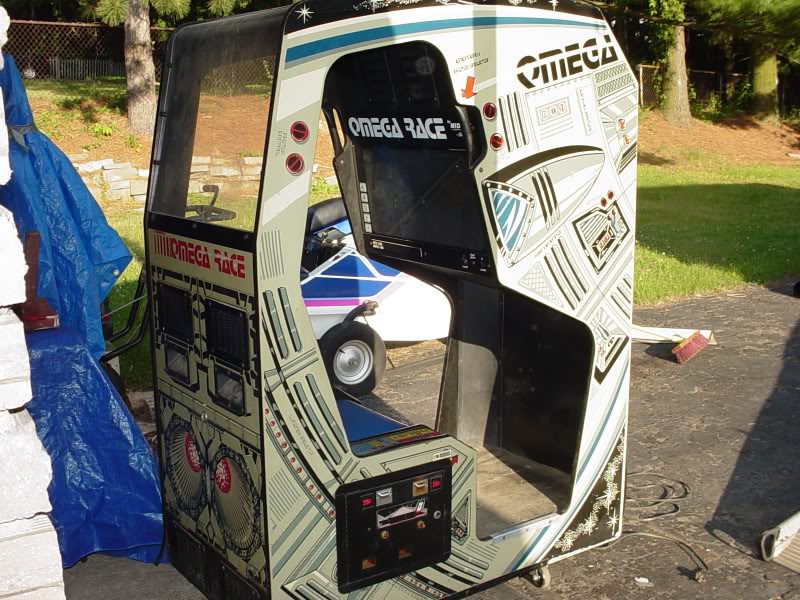 More than a passing nod there to Atari’s cabinets released at a similar time.

Nintendo’s only cockpit game was Radarscope. The game itself was not well received, and even the immersion provided by the environmental cabinet couldn’t prevent its early demise: 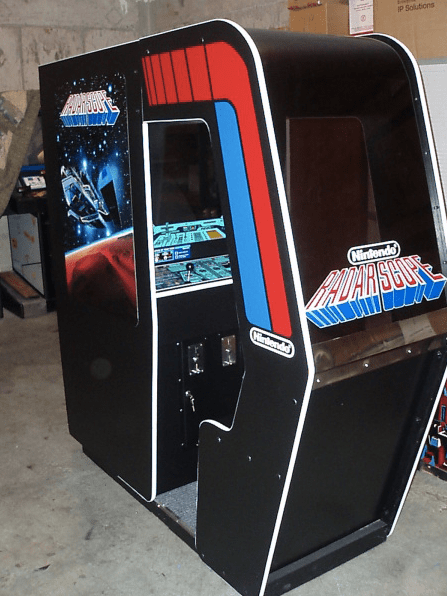 Notice the large viewing screen at the rear of the cab allowing other players to watch the action. A common theme running through most of these cabinets.

Two more from Atari here. RoadBlasters had a bespoke design not shared by any other game: 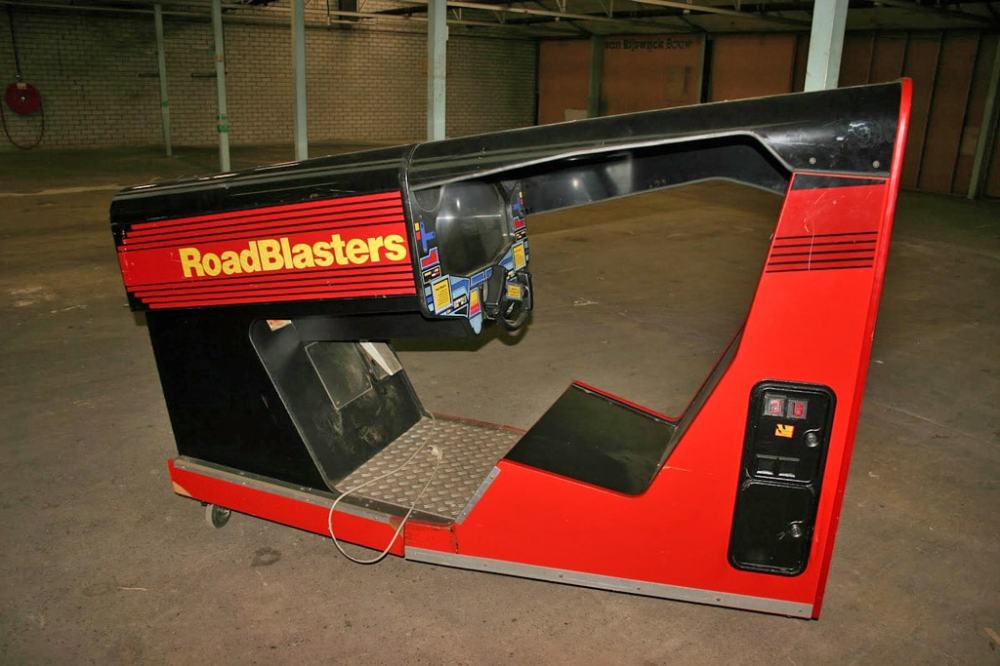 A low slung cabinet, it used a magnified screen to make the action on-screen seem closer and larger. It works for the most part, albeit in a somewhat primitive way.

And of course, the mighty Missile Command cockpit. I’ve played this cab a few times. it uses a 25″ projected monitor screen and houses a huge bass sub-woofer underneath the seat. It assaults the senses with sound and graphics. It is thought that just 100 of these were released: 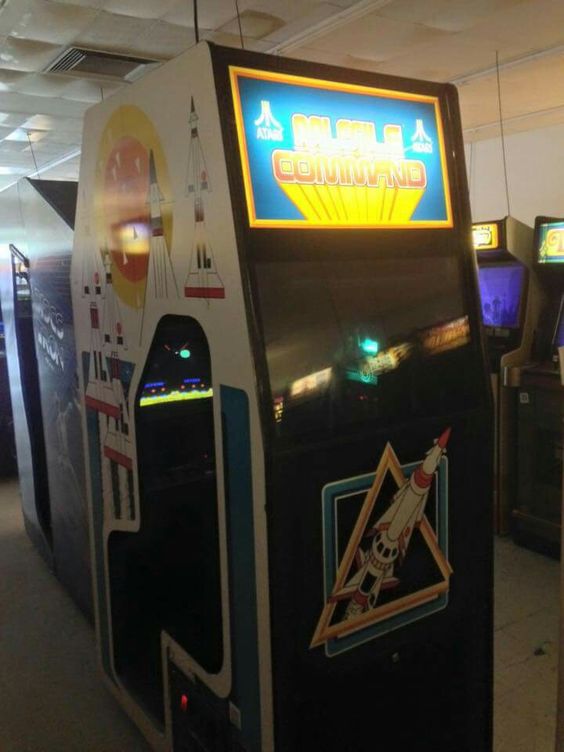 Battlezone supposedly had a cockpit design which never made it out of the factory:

Impressive. Would have been interesting to play that!

What these huge cockpit machines highlight, is the space required to house just one of them. With what would have been a 12 month maximum shelf life, what were operators supposed to do with these things once players stopped putting coins in them? This is part of the reason why there are so few examples around today. They were released in small numbers from the factory, and were usually destroyed at the end of their lives.

Very much of their time, cockpit arcade cabinets are a reminder of a time when “bigger” was regarded as the way to make things better. And the handful of these beasts that remain, serve as a testament to 80’s arcade excess, and an industry willing to try anything to make money.

If you get a chance to play a cockpit machine, give it a go.

Thanks for stopping by this week.