You may recall a previous post here on the blog, where I set up my camera and captured Atari’s Tempest vector arcade machine using a timelapse feature. I was really pleased with the results. (If you missed that post first time round, you can play catch up here).

Essentially what the camera does is take a multitude of photos at split-second intervals, then stitches them on top of each other to create a single shot that depicts motion. All you need is a tripod and a free hand to start and stop the camera.

I’ve been thinking about a suitable raster game to try out the same process, and decided on Donkey Kong, due to the fixed nature of many of the structures that Mario has to climb on each level. (Tried Frogger – it was a mess!)

Here’s a sample of the results from DK. They came out pretty good!

This is the first barrel stage. It’s pretty messy as there’s a lot going on. You can make out the first barrel falling out of Kong’s hands at the very start of the level top left, and dropping down to the oil drum at the bottom. Then you can follow its path as it jumps out of the oil drum ablaze, and moves its way across the bottom to the right, where it hangs around – look closely and you can just make out its outline there. The pinkish mush that’s prominent at the top girders are the multitude of barrels being thrown down by Kong. And overlaid on top of that movement of course is Mario making his way up (see I grab the hammer at the 5th girder – you can see the top stroke of the animation above the girder and mush). Further up, you can make out Mario’s arrival on the top girder. Notice also the three animations of Kong too as he turns to his right to grab barrels, and then to his left to throw them down. 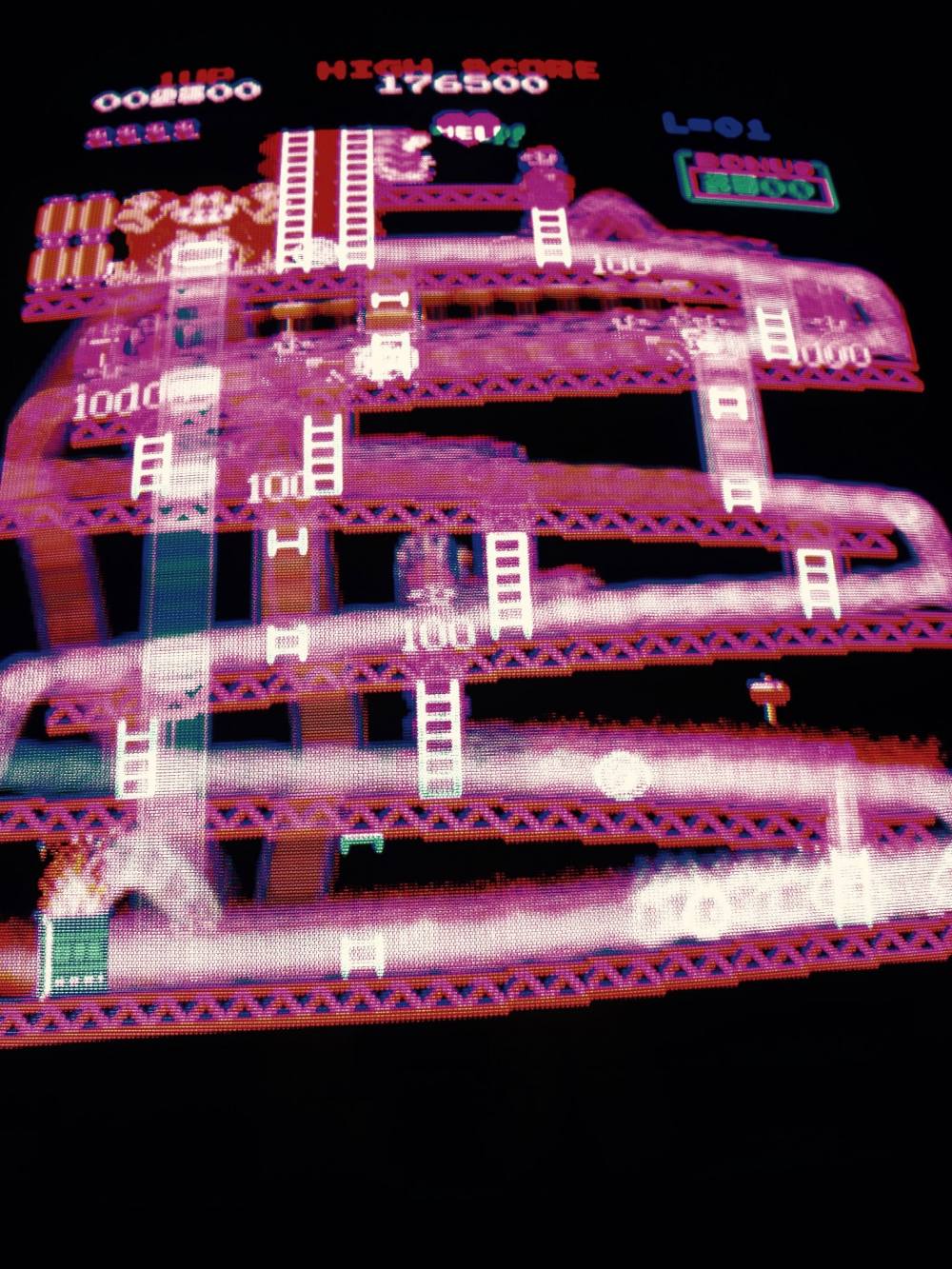 Pie Factory next. Mario’s journey through this level can be seen more clearly. I stopped the recording as Mario arrives half way up the right hand side about to collect the umbrella bonus, after grabbing the telephone at the bottom there for 800 points, navigating the pies on the second girder, and jumping the gap on the right of the third girder. Notice the journey of the three barrels that jumped out of the burning oil drum in the middle. One goes to the left and up the ladder, another travels left and down a ladder, and the final one journeys to the right of the screen. Kong is a blur as he moves left and right at the top girder. 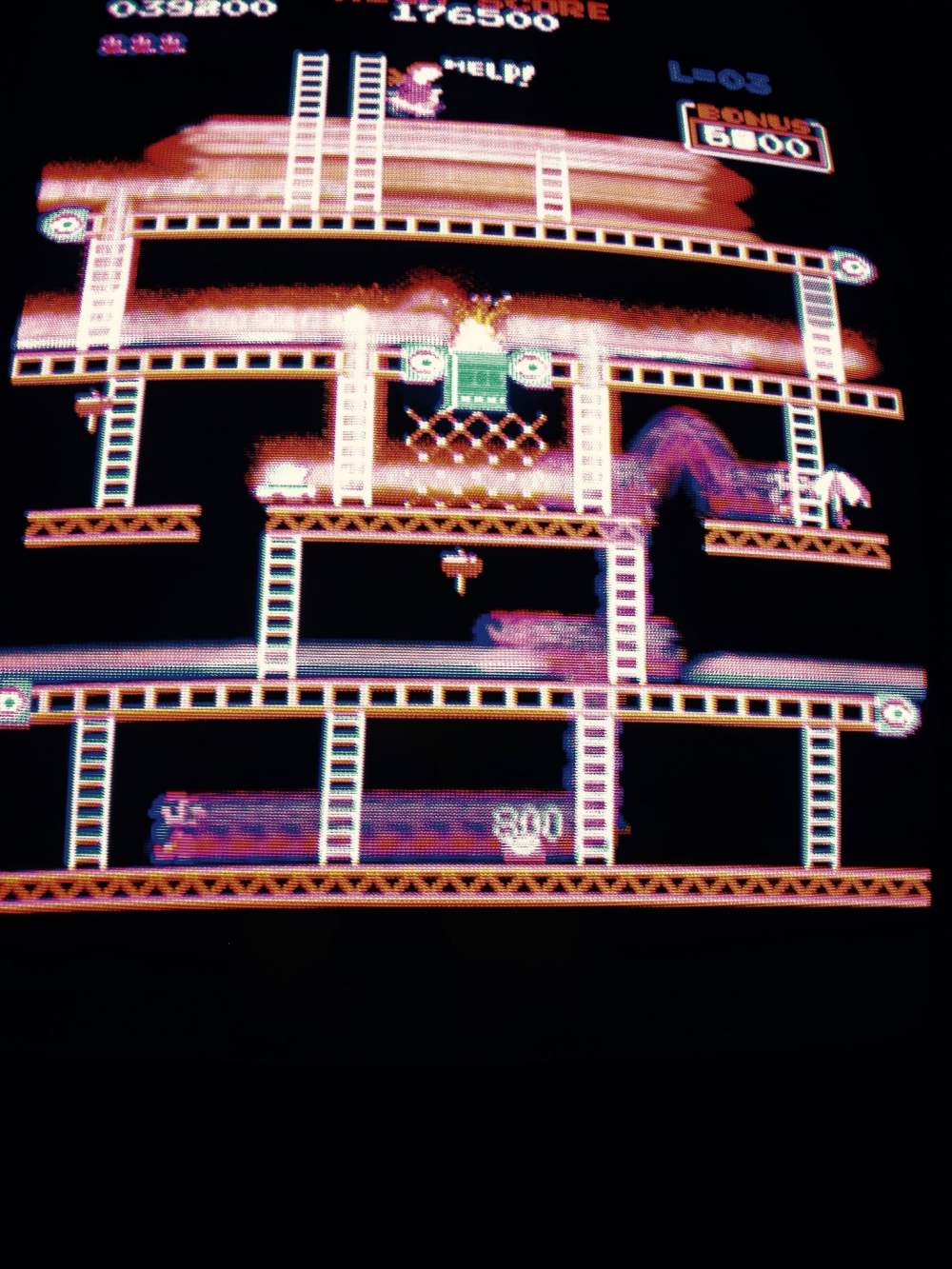 Onto the Elevator Level. The fixed structures can be made out clearly, but notice how the moving elevators themselves come out as two purple smears, and the springs create a cool blue waterfall effect. You can see the “safe spots” where they clear Mario standing still in two places at the top of the screen. The best part here is following Mario’s path through the level – from bottom left jumping onto the first up elevator, across the top of the fixed laddered girders, onto the next down elevator, jumping across again and navigating up to the top to complete the level. Kong’s two-frame “fist in the air” animation has created a cool effect – he looks like he’s flexing his muscles. 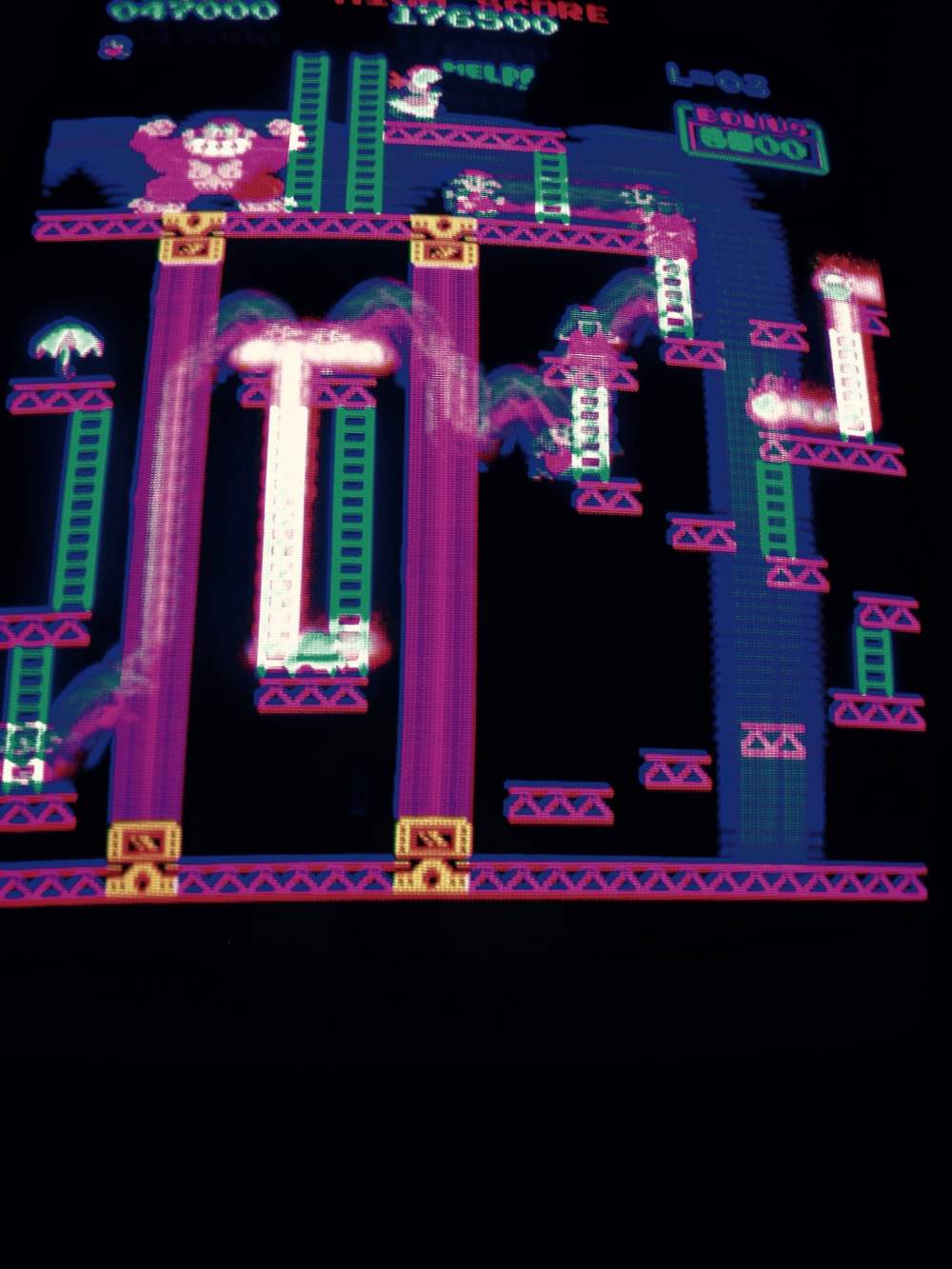 Rivet Stage. Did a couple here, one long, one short, as I thought they came out best of the lot. The way the fireballs are designed means they create a nice flamethrower effect, and the path they take shows up really nicely against the fixed girders. In the first picture you can see Mario taking out the rivets on the left hand side and getting 100 points for each in the process. Kong again looks like he’s posing as the two animations of him waving each fist in the air merge into one image: 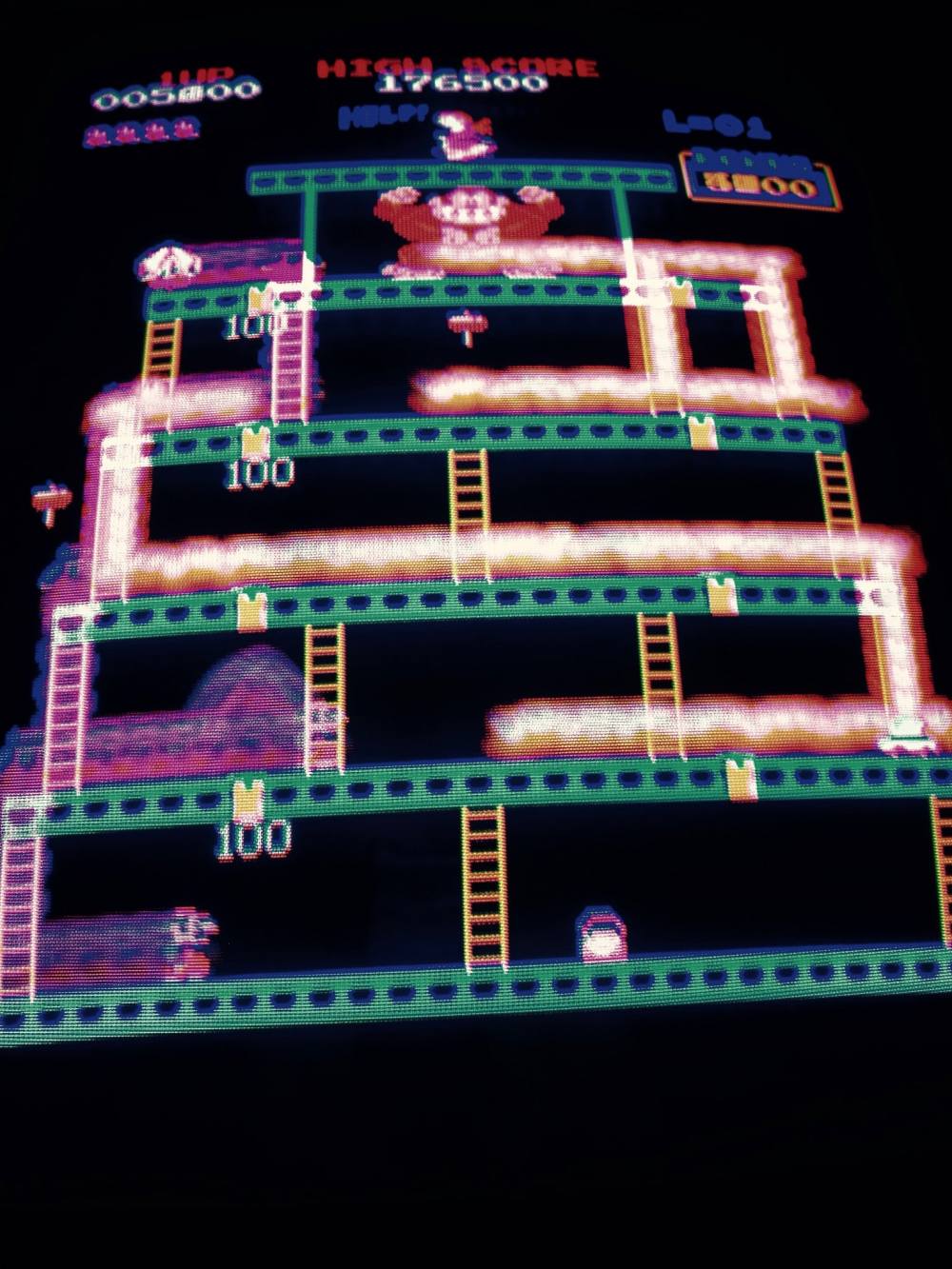 On the second pic, I stood still and let the fireballs come for me. See how the death animation blurs Mario. You can just make out the fireball standing still for a moment bottom right before he goes in for the kill: 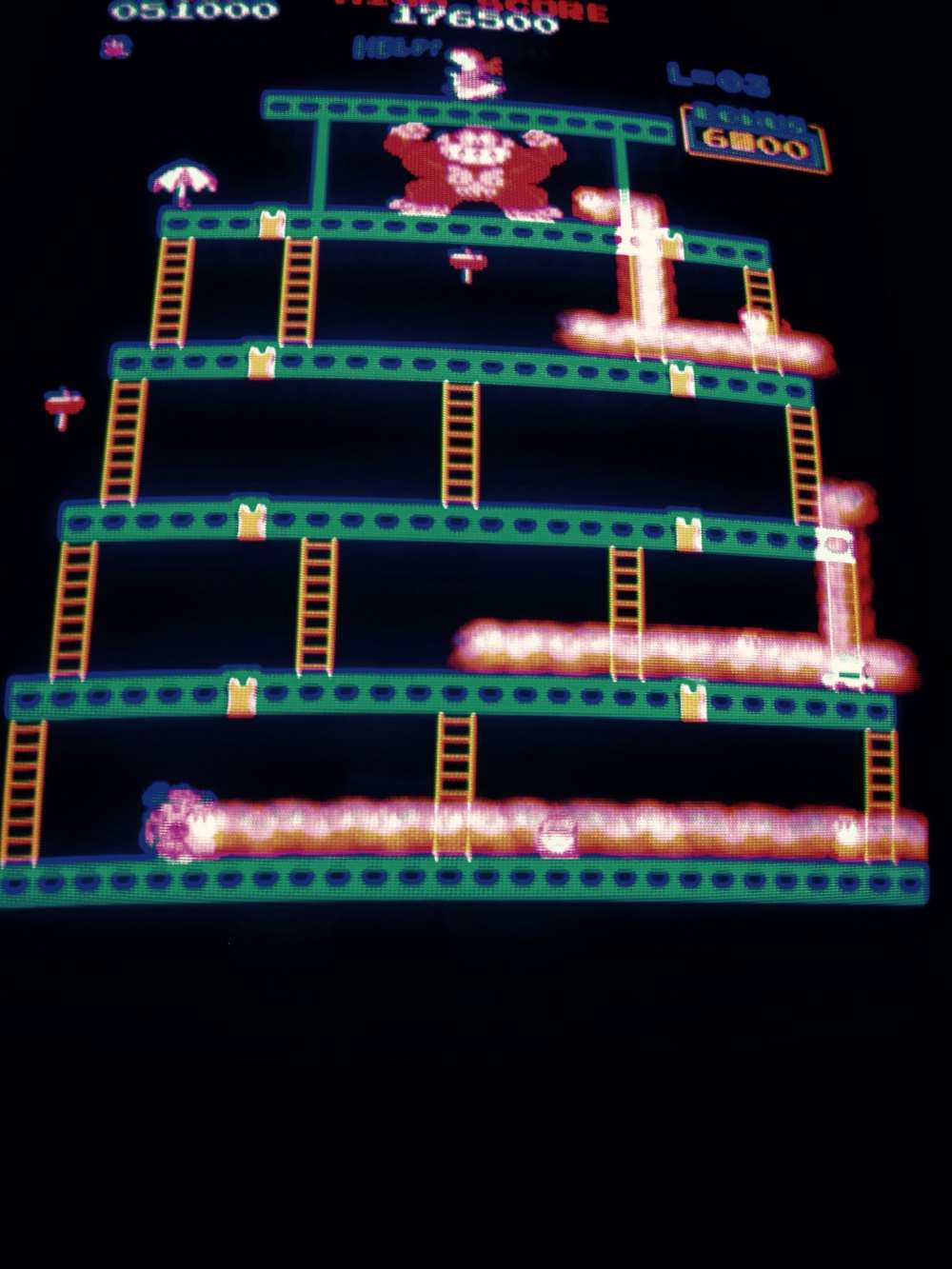 And last up, Kong’s defeat scene as he falls from the top of the girders: 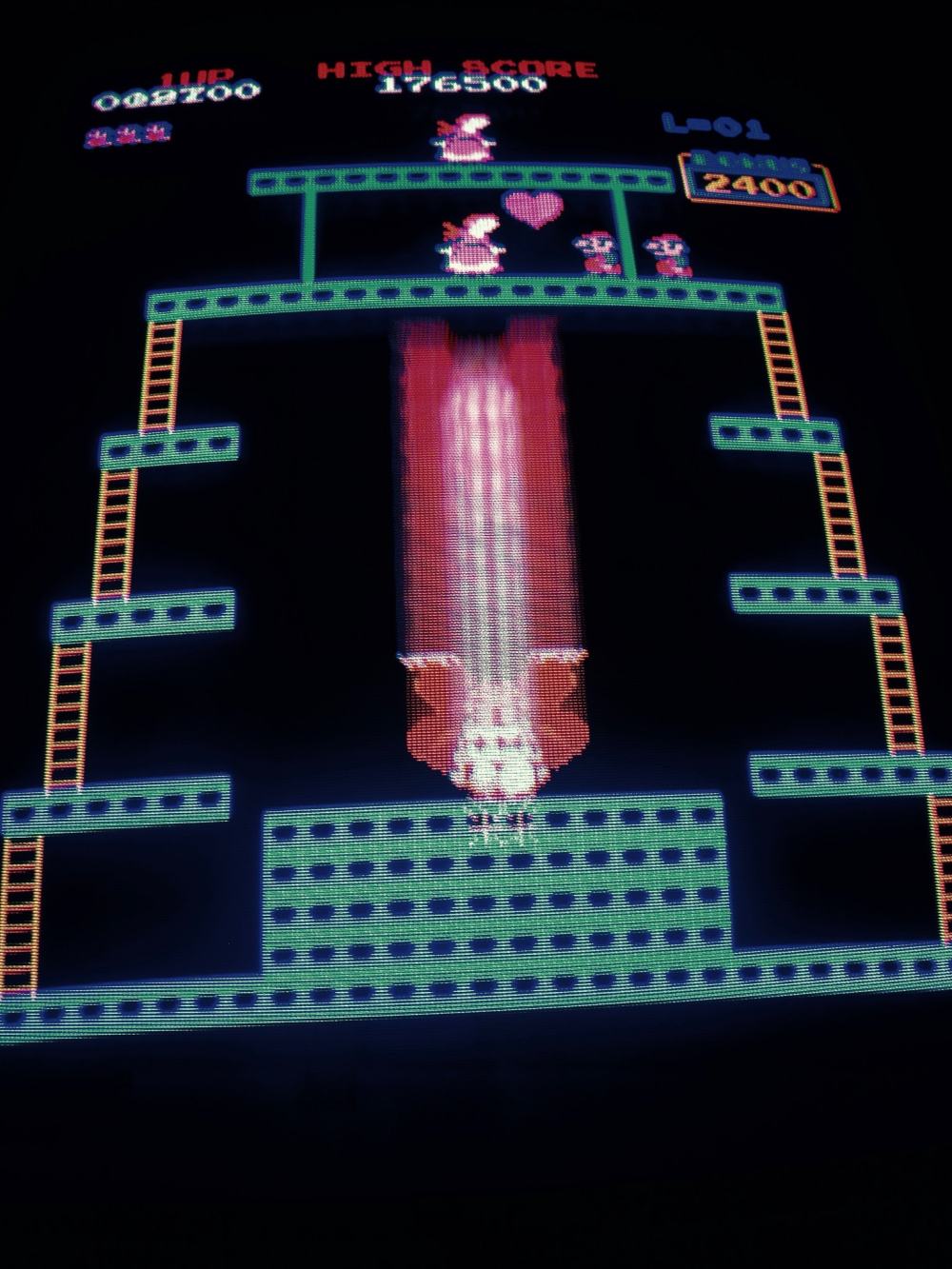 Hope you found these interesting. If you have any suggestions for another title to feature in a similar way, do comment below.

All photographs were captured with a Huawei P9 mobile phone.