Always good to report on an arcade raid over here in the UK, as sadly for us British collectors, these tend to be few and far between. As stashes of arcade machines get discovered over the years, finding out about new ones becomes more difficult. But they do happen, and proves that these machines are still out there waiting to be discovered. Often, these “raids” come about by pure chance. This is one example of discovering a haul of cabinets as a result of a random conversation about the hobby.

Collector Phill Burton happened to be talking to a friend one day earlier this year, and the subject Phill’s passion for arcade collecting came up.

My friend started to tell me that as a kid he used to hang around at a neighbor’s house as they’d built a hangout for their sons and their mates, as there really was no where else to go in the small village. Said hangout was an out-house with a pool table, air hockey and 15+ arcade machines! He went on to say that as the kids grew up the machines fell into disrepair and were stored in the garage (the hangout became a gym). Then he said a couple of years ago they were going to hire a skip and get rid of the lot!! He took my number and told me he’d pass it on to his mate…

Sure enough, two days later, Phill received a phone call telling him that the machines were still there, and that the owners never got round to hiring a skip to get rid of them as they had originally planned. This was great news. Arrangements were made with Phill to pop over, take a look at the machines and hopefully make an offer to clear the lot. This was a perfect scenario: a seller with a room full of untouched “junk” who was going to bin everything anyway, and an eager collector, happy to pay a fair price for the machines.

On arrival, Phill was ushered across a field to an isolated outhouse. Once in, they clambered over all sorts of junk – the type of thing you’d expect to be stored in such a place – boxes, tables, benches and old gym equipment. At the back of the room was a door slightly ajar, that had to be climbed up to see what was on the other side.

One of the lads showing me around perched atop a bench that was balanced on its end, and illuminated a small crammed space on the other side in a way that only an inadequate torch from a smartphone can muster. Standing on the tip of my toes, I popped my head over the threshold of the door and the sight that met my eyes was nothing short of astounding.

Phill’s eyes lit up. What he saw was an untouched treasure trove of filthy arcade cabinets, crammed into the small room: 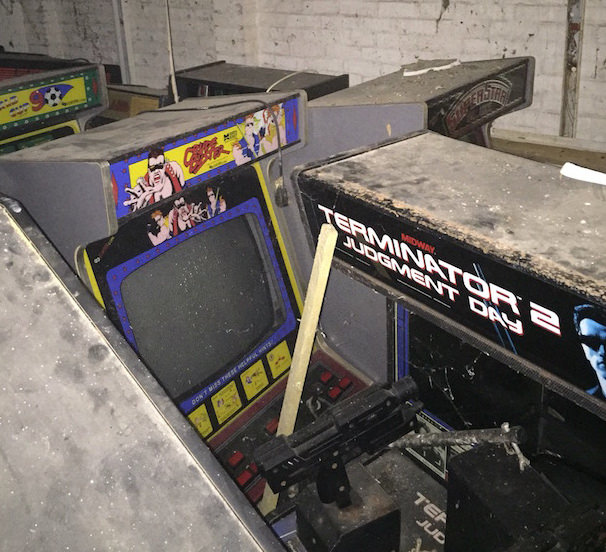 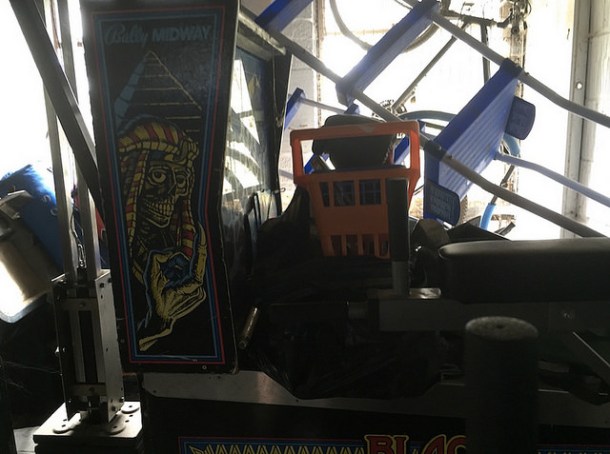 There appeared to be some really interesting stuff, stored across two locations, the room mentioned above and a separate garage. Both were stuffed full of arcade gems from the late 80s and early 90s. Amongst the haul was a complete pinball table, a rare Sega Thunderblade sit down cabinet, several generic Jamma cabs, an Operation Wolf and a Terminator 2!

Taking photos of everything in the dark, the flash also revealed a Final Fight, Crude Busters, World Cup 90, a Speed Rumbler, a couple of generic Jamma cabinets, two fruit machines and a small cab with ‘Pacland’ on the marquee.

So after climbing back out and dusting himself down, Phill made a fair offer to remove everything, and the raid was on! After securing the help of 5 other collectors and setting a date with the owner to come and collect, the team arrived at the location, with vans and sack trucks ready to lug these machines out into the open.

As is often the case with raids, its hard to see exactly what you’re dealing with until you actually start moving stuff out. Especially given the location in this case, and the amount of gear packed into a small space. Phill described the plan:

The Thunder Blade and pin had been decluttered by the owner and the guys immediately investigated both with the usual prodding, attempts at cleaning off thick dust, the obligatory opening of any unlocked doors and a bucket load of photos and inevitable banter. We finally made our way over to the corner with the door, entered the arcade garage and set about propping open the garage door to the outside so that it wouldn’t swing dangerously down. Facing into the room, now with it illuminated by the light from the open garage door, the guys set about investigating the cabs and properly studying their condition; it was clear that most, other then being pretty dusty, were in great shape and didn’t even have the usual side scrapes.

The team got to work and started pulling the machines out, and hunted high and low for anything that might have been missed first time round: 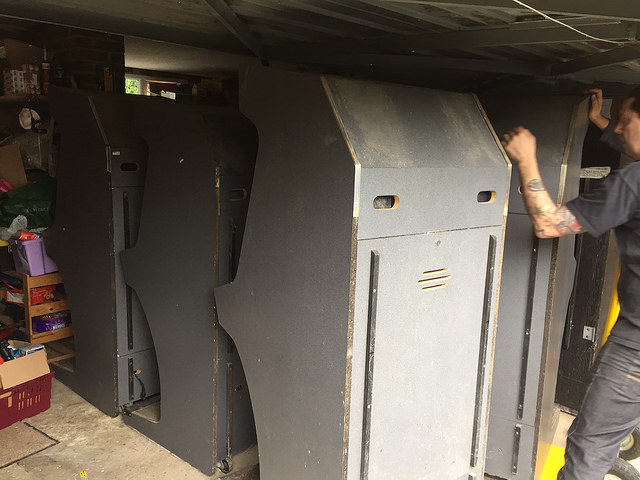 Here’s a top tip for you. Always bring arcade collector Vic along to a raid. He’s handy with a dustpan and brush: 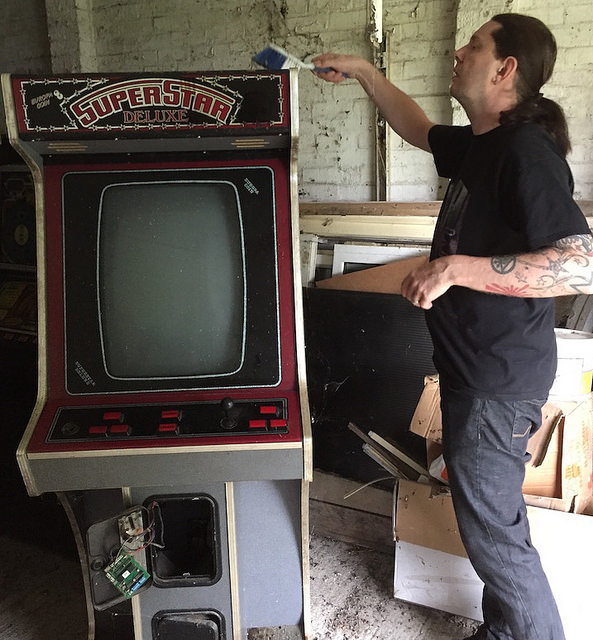 Cab by cab, they started lugging everything out into the open: 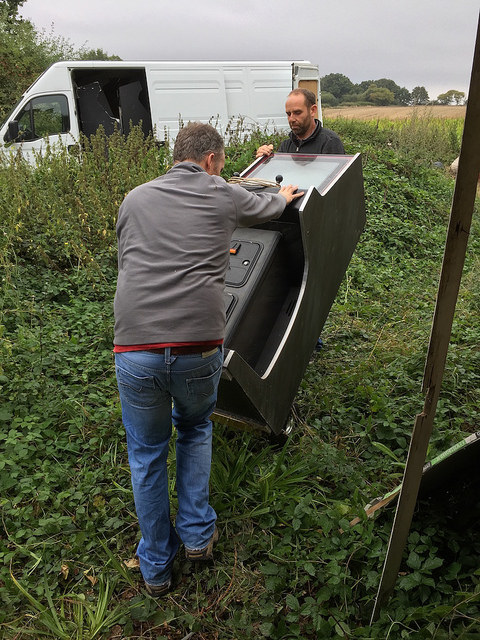 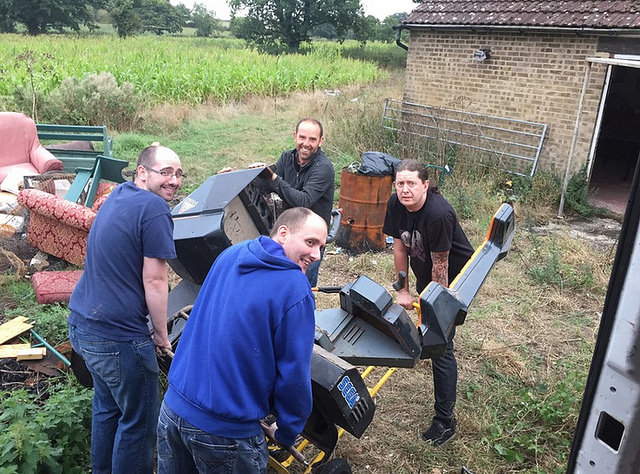 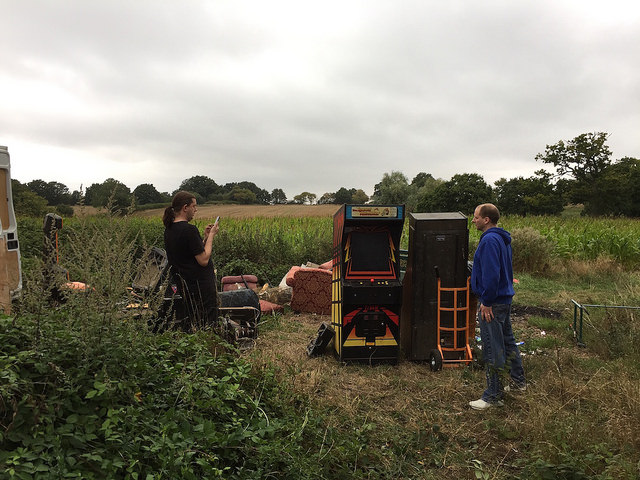 One of the nicer looking machines was this decent looking Titan Jamma cabinet that was running Speed Rumbler. An initial search revealed a nice bonus in the form of a squirrel’s nest inside the coin door: 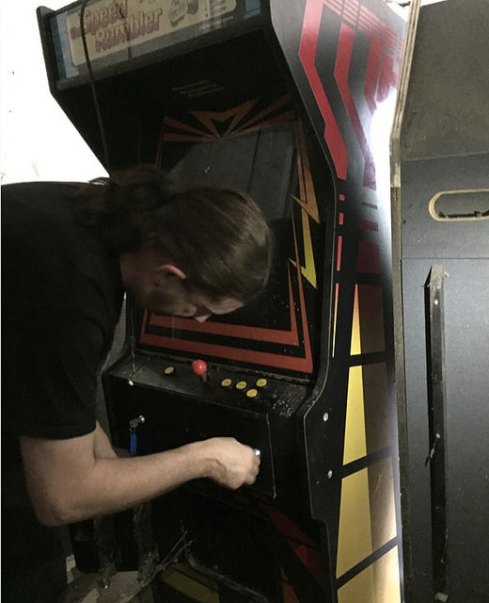 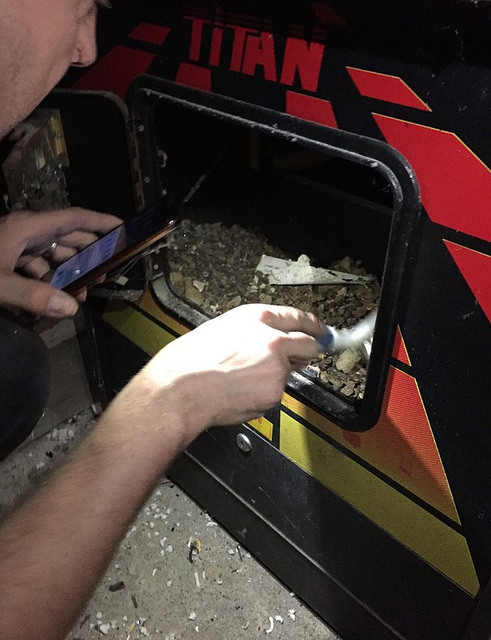 Good to see Vic working away with his brush again.

Interesting cab of the day was this dual screen cab that sported a “Section Z” marquee. A nicely engineered piece of kit this. Presumably the set up allowed spectators to watch game play as people played:

But the gem of the haul was surely the Thunder Blade. This mighty cab required four people to move it, and despite the obvious surface rust, it was in reasonable shape:

Let’s not forget the fruit machines. There are guys out there who collect and restore these things, so they were rescued too: 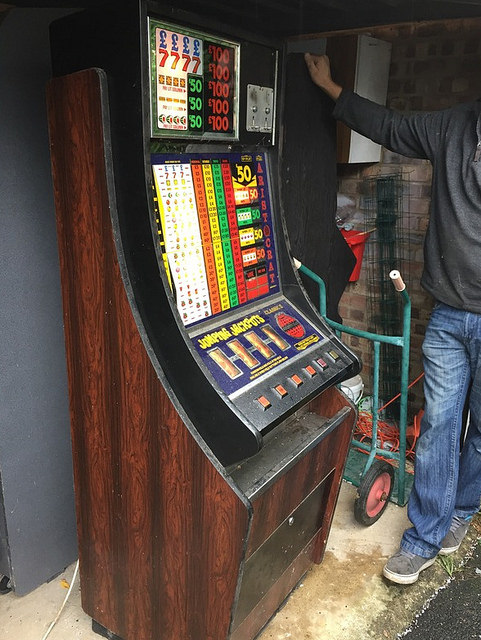 (Once home, this machine was shedding 50p pieces!)

So once the cabs were hauled out into the open, it was time to get everything loaded up. Loading the cars looked like a fun challenge, but everything was taken away safe and sound by the end of the day: 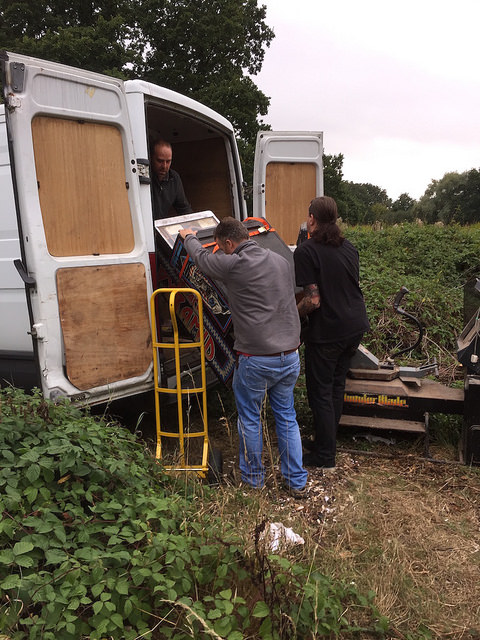 All in all a good day’s work. Great to see these lost machines rescued and back in action.

Once back home the guys were able to start testing things. Nothing appears to be beyond fixable, but as you’d expect there are issues to be fixed. The cabs are physically all very sound with no damp issues. The Operation Wolf PCB is dead. Phill managed to repair the Snow Bros PCB by replacing four RAM chips. The cab with the new large round buttons will need its monitor chassis replacing. The World Cup 90 will need a replacement PSU and it’s PCB is displaying garbage, as is the Crude Buster PCB; and the Robocop PCB is missing backgrounds.  I guess some of these are minor issues but it needs some knowledge to get them working properly again. But overall, it’s a great collection in great condition.

Here’s one of the Jamma cabinets cleaned up, with replacement round buttons and running the Snow Bros PCB:

The Terminator 2 had its main PCB professionally repaired by a friendly collector and its monitor repaired by a CRT specialist. Phill has a suspicion that the gun coil board and sound board are probably both dead too. But she’s getting there!

Here’s the final inventory of what was rescued:

So this turned out to be an impressive haul. Great to see these cabinets saved and in the hands of collectors. Excellent work gentlemen! 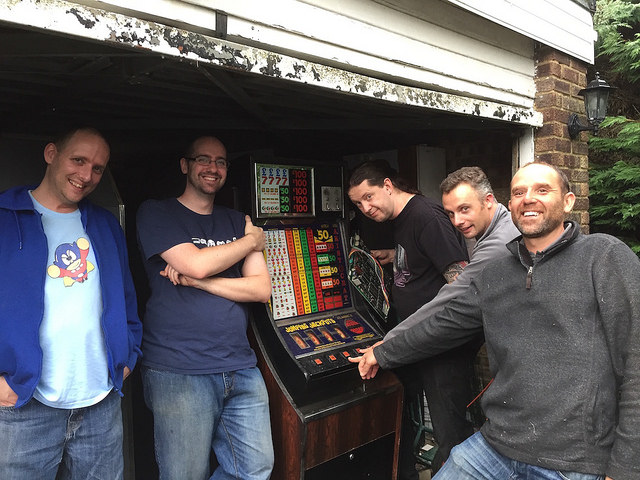 Many thanks to Phill for allowing me to share these pictures and tell the story here on Arcade Blogger.