When the “Golden Age” of classic video games hit the American mainstream, much of the country was somewhat bemused by this new phenomena. Adults didn’t know what had hit them, as millions of teenagers across the country spent many waking hours in dark arcades that had sprung up all over the USA. From laundromats to 7-Eleven convenience stores – video games had finally hit popular culture.

News reports sprung up – hoping to shine a light on what was happening; some reported on the good, some on the bad aspects of the craze. So here, 35 years later, is a compilation of some of those news features that have been shared to YouTube, and they make for interesting watching, given what video games have become today.

“Entertainment Tonight” ran this segment in 1982, asking “Do Video Games Cause Violent Behaviour”:

And here, CBS took the time to talk to arcade owners, players and developers, including a young-looking Steve Richie trying to get to the bottom of what was so appealing about arcade video games:

ABC Channel 7 in Los Angeles ran a similar expose of the video game phenomenon during the same year. Titled Video Fever, there is some very cool footage here. Including some capture from Chicago’s Midway factory, and an interview with management from Taito America:

There’s a really interesting part in that report at 5:10 that refers to Taito’s supposed new game in development called Toasters and Chainsaws. This is a game you will not have heard of. Why? Because it was completely fictitious! The two guys from Taito interviewed in the film, Rex Battenberg and Mark Blaszcyk were tracked down in 2011, and asked about this particular ‘game’ – they both confirmed that Toasters and Chainsaws was a fake name to throw people off the trail for that very news report. The reason being that Taito was so secretive about what they were working on back in those days. According to Blaszcyk:

It is correct that Toasters & Chainsaws was never a real game. It certainly was never tested. All it was, was a marquee.

Additionally, according to the report 134 players were asked if they’d ever received an injury playing the machines. 65% reporting receiving various injuries ranging from BLISTER, CALLOUS, ARTHRALGIA and TENDONITIS. Got to love that stat – all confirmed by a serious looking doctor wearing a white coat. More on that later.

Another interesting claim in the feature was that in the states of Georgia, Rhode Island, New Hampshire, New York, California and Massachusetts, some towns had either restricted the use of video game arcades or banned them altogether. Fears about America’s youth being brainwashed and corrupted by video games was a real fear. Incredible stuff considering today’s world of Mortal Kombat and Grand Theft Auto.

Note more amazing footage video footage shown from Midway’s factory, and even better coverage of Williams Electronics, citing Defender as the number one coin operated video game in the country at the time.

And some hilariously outlandish medical claims from Barry about the supposed side effects of the new gaming craze:

Some of the things that doctors are seeing are Space Invaders Elbow, Defender Wrist and Pac-Man Pinkie. These are really coming into medical offices as the video game wave continues to build.

A reference is made to the new problem facing the industry back then. Bootleg games:

Then there are the pirates. Companies which illegally copy a successful game, undercut prices, then get out of the market before the legitimate manufacturer can take the case to court.

And another report from 1982. North Dakota’s KTHI-TV based out of Fargo look at the arcade phenomenon:

The report took it upon itself to summarize what these new-fangled arcade games were supposedly all about. Presumably for the open mouthed, uninitiated watchers at home:

Eric Ginner is interviewed in this feature from 1982. “The Winning Strategy” was a news segment aried by San Franciscos’s KPIX Channel:

Yet another here (1982 seemed like the sweet spot for these news reports). This time from the Canadian network CBC archives. Reporter Hana Gartner investigates video games. Video games make millions, 25 cents at a time, includes a great interview with a then 27 year old Eugene Jarvis, creator of Defender and Robotron:

An interesting side note on that video – notice the Missile Command player at 5:58. That’s none other than our friend Roy Shildt, former world record holder on Missile Command. He’s playing at an event at Lakewood California. Watch the speed at which he flicks the crosshair around using the trackball during the short clip of him playing…. I’ll say no more.

I’ll leave you with this highly disturbing report again from the 1982 CBC archives. ‘Arcade Arthritis’ was a thing. Apparently:

It may not have the same sporty overtones as tennis elbow or runner’s knee, but in 1982, hospitals are dealing with increasing incidences of another recreation-related illness: “arcade arthritis”. The heated button-mashing and enthusiastic body English that often comes with arcade gameplay are causing unprecedented aches and pains for video gamers. CBC-TV’s The National explores this new affliction of arcade addicts.

And here’s the report as it aired: (Note this video will open in a new window) 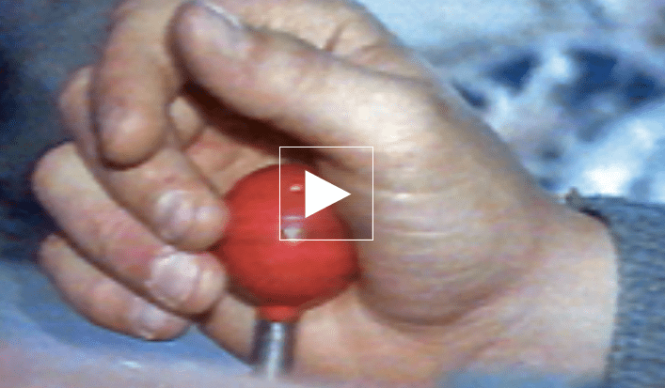 So there you go – hope you enjoyed this trip down memory lane. Great to see how the world was reacting to this industry as it started to take hold in the early 80s. It was clear that the reporters (and presumably the rest of middle-aged America) were trying to make sense of it all.

Thanks for visiting this week.