The Play Expo Events are now a regular fixture of the retro gaming calendar over here in the UK. These annual shows feature a variety of activities including Cosplay, Retro console systems, traders, guest speakers (check out the talk I gave a few years back in Manchester here), multiplayer LAN gaming and of course video arcade machines and pinballs.

Things have changed since the early days, when the collector community pulled together and brought their own arcade cabinets to support these events; but as time has gone on, and the events have become more popular and successful, the machines are now provided by one company, Retro Games Party. Owned by James Brindle, RGP provides various services related to video arcade gaming, not least of which is his ability to provide a large amount of cabinets to an event such as Play Expo. 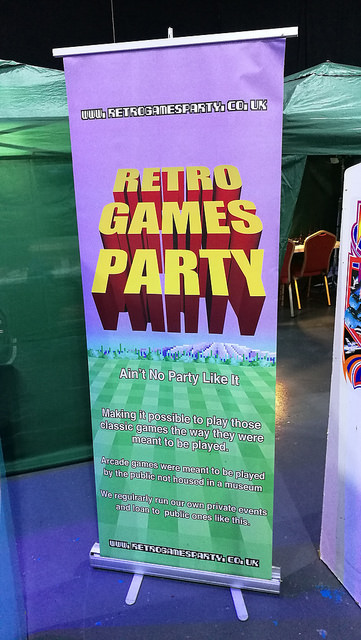 So in July of this year, I made the 3 hour trip up north to Blackpool to check out this year’s event. The lineup of arcade cabinets was particularly impressive. Of course the general public wants to see certain titles out on the floor available to play – Pac-Man, Defender, Space Invaders, Robotron, Asteroids – you get the picture. These ‘AAA’ titles should be the staple of any lineup of cabinets. But after that 40 or so core of cabinets, James is given a free rein to choose what else he feels should be available to play. He didn’t disappoint!

I took several photos of the general setup before the doors opened to the public to give you an idea of the setup, and what was available to play: 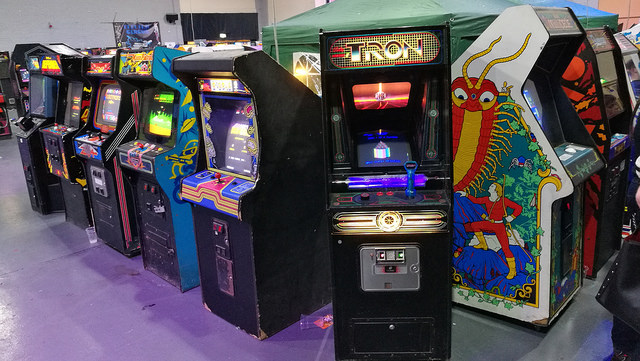 Having done this for a few years now, James has the process down pat. He arrives not only with the cabinets, but is also armed with spare parts and a tools, and sets up a temporary workbench to give immediate attention to anything that decides to break down – and of course, there will be casualties throughout the three-day event!

Any machine found to be misbehaving is quickly wheeled away to the repair area, troubleshooted (is that a word?), repaired on the spot, and put back out to play. I witnessed a flyback in a Midway Bosconian go pop at the event. The smell is something you don’t forget in a hurry, but it was swiftly dealt with by James and the team, and was back up and running within 45 minutes. Not bad at all.

The lineup was great. There was a really good mix of cabinets available to play. This year, James was able to make groups of same-manufacturer games at certain points around the hall:

I’d like to think the public was able to make connections between some of these cabinets by their design and gameplay. Come opening time, the lights were dimmed, and we had a good arcade feel to the place. The machines were busy all day – not so busy that you couldn’t get a game, but just enough of an atmosphere to give an authentic 80s experience: 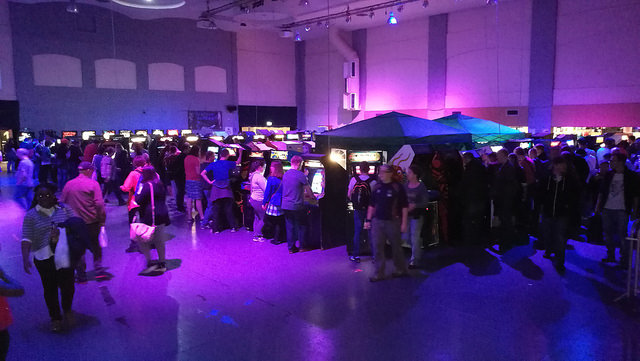 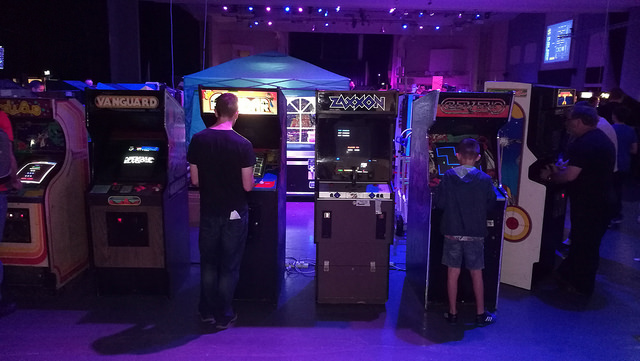 Pinballs were well represented. Not a huge lineup this year (the Manchester event seems to get a larger number of machines), but a good dozen or so quality pins were available to play: 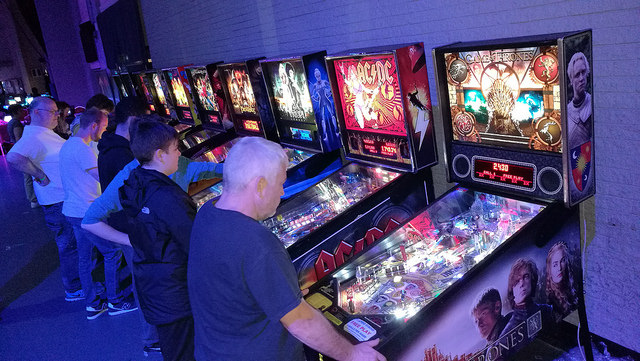 The world’s best Pac-Man player was on hand throughout the weekend showcasing his skills. On the Saturday, Jon Stoodley was gunning for the marathon world record on the hidden Pac-Man game found on the 20th Anniversary Ms Pac-Man/Galaga arcade cabinet. After eleven hours and ten minutes of continuous play, and passing through two split screens, he achieved an astonishing score of 6,532,000, beating the previous world record by some 200,000 points:

And on Sunday, Jon followed up this attempt with another, where he tried to achieve another single perfect game of Pac-Man on a dedicated cabaret machine.

For me there were many cabinet highlights, but here’s a few that I thought were worthy of our attention here at Arcade Blogger:

So there you go. I enjoyed the event this year – the huge variety of 87 dedicated cabinets gave me an opportunity to play several games that I otherwise would not have the chance to. Vanguard particularly captured my imagination – lovely looking cabinet with some great original gameplay.

Thumbs up to James and the team at RGP. I’m looking forward to the Play Manchester event later this year, where no doubt there will be a few additions to the cabs found at this year’s Blackpool event. I’ll be there with my camera, and will of course report back here.

To find out more about Retro Games Party and the arcade services they provide, go check out their website. My UK-based readers might be interested to know that James is particularly adept at arcade PCB repairs – tell him I sent you.

Thanks for visiting this week.