Well I’m back from my annual trip to America, with a ton of cool classic arcade related info to share – look out for those articles in the coming weeks here on Arcade Blogger.

First up, I thought I’d start with a review of the three-day Free Play Florida event which took place on 17-19 November.

Attending this year’s event has made me realise how fast the last 12 months has gone by. It doesn’t seem like yesterday that I was at the 2016 show enjoying the plethora of great cabinets available at the DoubleTree Hotel in Orlando.

You may recall I reported that last year’s event was a great success, so I was really looking forward to see what changes had been made this year, especially in terms of the lineup of cabs. I was not disappointed!

I’d been speaking on and off to one of the organisers of the show, Brian Jones in the weeks preceding the event, so I had a broad idea of what to expect, but there were still loads of surprises!

So the basic premise is that guests pay a single fee at the door, which gets them access to hundreds of pinballs and video games all set to free play. There are talks, celebrity appearances, competitions and vendors in attendance – so plenty to do for young and old visitors. For me this was a great opportunity to catch up with friends from across the pond and play some rare classic arcade machines.

We arrived late on the Friday and were able to sneak in an early look at what was going to be on the show floor:

Brian tells me that setting up takes around two days. Bringing in well over 300 machines from across the state is something of a logistical nightmare, but somehow it all comes together, and gradually the show starts to take shape, ready for doors opening at 4.00 pm.

Walking into the show is an impressive sight. These days, finding so many cabinets and pins under one roof is a rare thing indeed. The bonus here is that so much of what you find on the show floor is very rare – so getting to see first hand, many of the cabinets on display is motivation enough to come to the event. These pics should give you an idea of the atmosphere across the weekend:

As you can see there was so much on display, but I’ll break down what was particularly interesting this time round.

The first thing I headed for were these old pinball and bagatelle cabinets put on display from a local collector. Really fascinating to see these predecessors to what we now know as pinball – and even more interesting was learning about their history during the prohibition style raids of the 40s when pinball was regarded as an illegal and less than wholesome activity. That many of these machines survived this dark period in pinball’s history is amazing:

All were playable of course, and each machine was accompanied by a small card giving a brief history of its origin. Really cool to be able to play some of these.

Pinball of course is a key part of Free Play Florida. This year’s lineup was exceptional:

Attendees were lucky enough to be able to get hands-on with Stern’s latest table, Guardians Of The Galaxy and hot off the production line was Jersey Jack’s brand new pin, Pirates of The Caribbean: 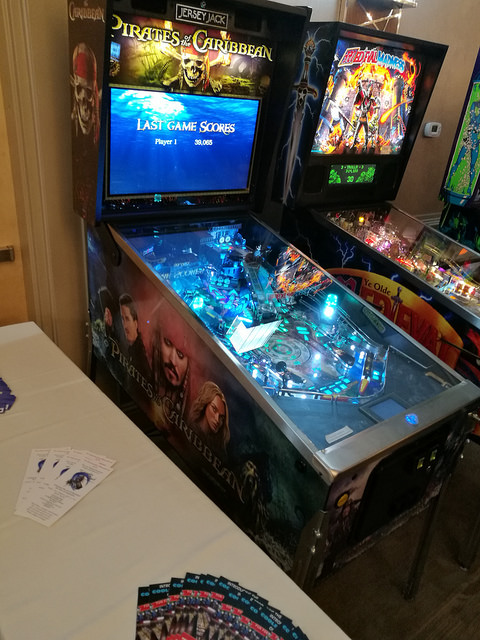 Worth the price of admission alone those two.

I got to meet several key industry people. In attendance were author Tim Lapetino, who was there signing copies of his book The Art of Atari:

Nathan Barnatt was on hand again throughout the weekend. We saw an early cut of his first short movie Neutral (which was great incidentally), and of course, he brought along his retro gaming alter-ego Keith Apicary, who brought a special blend of chaos to the show:

Other guests included Gary Stern of Stern Pinball, Jack Guarnieri of Jersey Jack Pinball, Walter Day, Scott Adams, pinball designer Steve Ritchie, Brian Colin and legendary gamer Todd Rogers was on hand giving tips and a live demonstration of Dragster. All were involved in various individual and panel talks throughout the weekend. These were a real highlight – I highly recommend taking some time out from the main floor to take in some of these during your visit.

And of course, what Florida event would be complete without Billy Mitchell in attendance?

I mentioned the talks. These were extensive and varied. One of my jobs at the event was to host a talk about the arcade game Aztarac. I’ll be writing about this in detail next week, so keep an eye out:

Being a blog primarily about classic video arcade machines, I guess I need to share some interesting cabinets that could be played at Free Play Florida 2017! Here’s the highlights:

An area I spent a lot of time in was this cool row of cabarets:

What an awesome line up of cabarets. Great too to see some Candy cabs getting some US love. A rare sight on these shores:

There were other cabinet highlights of course. This one took me by surprise. A Missile Command cockpit cabinet. The trackball had a few issues, but it was great to sit in and play all the same:

A few other cabs of note:

There were also these huge replica cabinets dominating the central area of the floor. Built by the Free Play Florida organisers, these super-sized machines were actually fun to play and made for great photo opps:

Worth mentioning Saturday night. The after hours party for VIP guests was great. The lights were turned down and we were treated to a quieter show floor and a great arcade atmosphere:

There was a lot more going on that space here doesn’t allow me to go into, including a full pinball tournament taking place in one of the side rooms, free trading cards to collect, and even a very rare Aztarac machine out on the floor for the public to play.

My friend Steve Kleisath was there, setting a new world record on Mario Bros with his playing partner Stephen Boyer:

So thanks once again to the organisers of Free Play Florida – Steve, Brian, Brandon, Marcy and everyone else involved in putting this show on truly excelled themselves this year. Well over 300 pinball and video machines were available (which is significantly more than last year) and were played by over 1,500 visitors over the three days

It’s worth pointing out also that Free Play Florida is 100% non-profit, and is put on by enthusiasts – it really is a great event, enabling the public to interact with the Golden Age of video gaming in a unique way. Without question, getting access to this number of rare machines under one roof makes this the highlight of my arcade gaming year, and this was the best one yet. Not only is playing the games a treat, but the opportunity to meet so many interesting people and learn a lot of history about the games just makes the whole experience worth doing.

I’ll leave you with this great walkthrough video posted by the guys at Arcade Action:

Make a date in your diary for next year’s show – I’ll see you there.

Thanks for reading – you can share this article using the social media buttons below!

More on the Aztarac story from the Free Play Florida event here on the blog next week – trust me, you won’t want to miss it.