Regular readers of this blog will have seen me reference “Arcade Raids” in previous articles. This might create images in your head of hooded gangs of arcade collectors breaking into warehouses in the middle of the night to stealth-steal a stash of classic arcade cabs. As exciting as that would be, the reality is somewhat different. A basic “raid” will go something like this:

These raids occur regularly over in the USA, but here in the UK they are few and far between. However a couple of years ago some UK collectors pulled off something spectacular, and it involved a magnificent sea ship, The Duke of Lancaster:

Built in Belfast, the Duke of Lancaster operated as a passenger ferry and cruise liner between 1956 and 1979, winding its way across the seas from Ireland, Scotland and throughout Europe. Indeed she was one of the last passenger “steamers” built to operate for British Rail’s shipping interests. Silver service was the norm and The Duke was fitted out in relative luxury for its time, as this shot of the first class lounge shows:

Later in 1970, she was converted to a car ferry, with one of its decks adapted to accommodate vehicles via newly cut rear doors; and The Duke sailed the seas again under the Sealink brand: 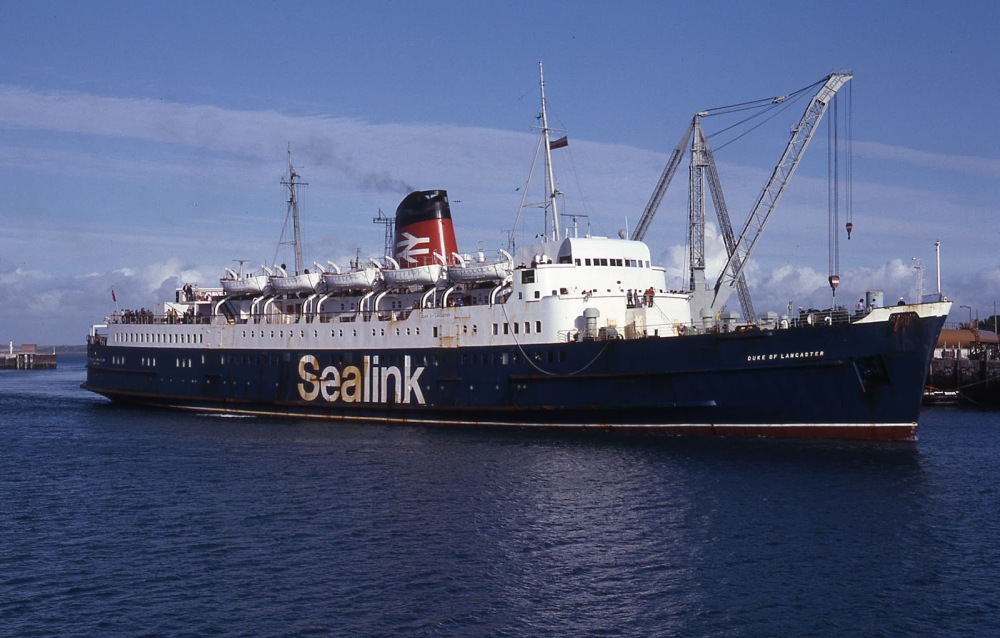 Her last voyage was in 1978, and within a year, the Duke was sold to a Liverpool based company, whose intention was to reopen its doors as a dry docked leisure centre attraction. And so it was to be: the Duke arrived at her final resting place in Llanerch-y-Mor, North Wales, in August 1979 to start her new life. Here’s an original flyer for “The Fun Ship” as she became known:

With plans in place for a hotel conversion (which never materialised), and kitted out with various attractions, including an arcade covering the whole of the car deck, the Fun Ship quickly became a popular tourist attraction, creating jobs and bringing wealth to the local area. But the fun wasn’t to last long. A very complicated and fraught legal fight began with the local council who feared its presence would decimate local businesses. Its use as “The Fun Ship” was relatively short-lived and it was subsequently closed to the public; supposedly because access to the ship is via a bridge under the North Wales railway line, which was too low for emergency vehicles – a technicality disputed by the owners throughout the battle.

What this meant was that amongst all its other other inventory, over 50 arcade machines from the golden era were sealed shut inside the ship.

Over time, the derelict ship started to rust, and became largely forgotten about, known only to locals as the beached ship by the coast. No one went there, no one cared. The owners stated they had no plans to sell. It was literally a metal tomb. And so it quietly sat, holding its cargo.

Fast forward to 2009, and some folks over at the 28dayslater website, an urban exploration community, posted a series of pictures supposedly taken from inside the vessel. For those that don’t know, ‘Urbex’ is a pastime where people gain access to old abandoned buildings and explore, taking pictures along the way. Someone had managed to gain access to the inside of the ship in the middle of the night. Amongst the set of haunting pictures they took was a single tantalising glimpse of the stash of cabs:

In arcade circles, that picture is regarded as a lead. Step up UKVAC forum member Oliver Moazzezi. Oliver is known as one of the more prominent arcade collectors here in the UK. He picks up the tale:

So in February 2011 myself and 2 other collectors drove for what seemed like forever until we reached our destination, and the destination was pretty magnificent. 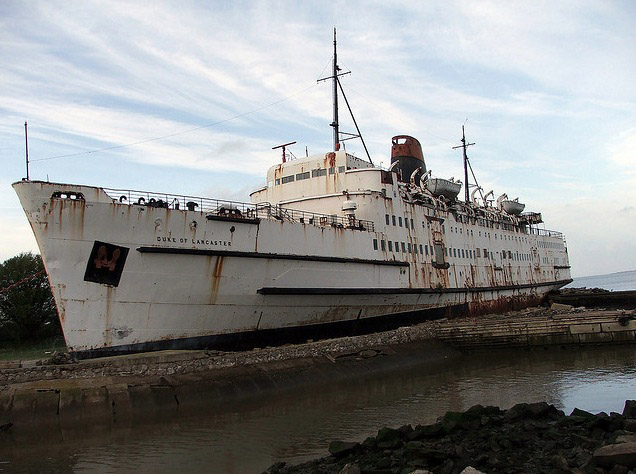 By the time we got to the ship, I had become very familiar with its history. I had learnt about its days as the Mostyn Fun Ship and the fantastic opportunities it brought to the locals and holidaymakers.

The reason the ship was beached was to get around the rule of no shops or trading to be open on a Sunday (as was the case back then). John Rowley the owner, in his brilliance, had found a loop hole – ships were not bound by this law, and the law did not state where the ship must be – whether it be at sea, at dock, or indeed beached on land – and thus the Fun Ship was born.

Met by the owner, the three adventurers were let in, and following a walk through various twists, turns and stairs, they eventually discovered the arcade – minus its red carpet, which was removed in 2009 for another business project. During this first visit, Oliver and his crew were able to document exactly what cabinets were there and what condition they were in. These are some of the actual photos they took: 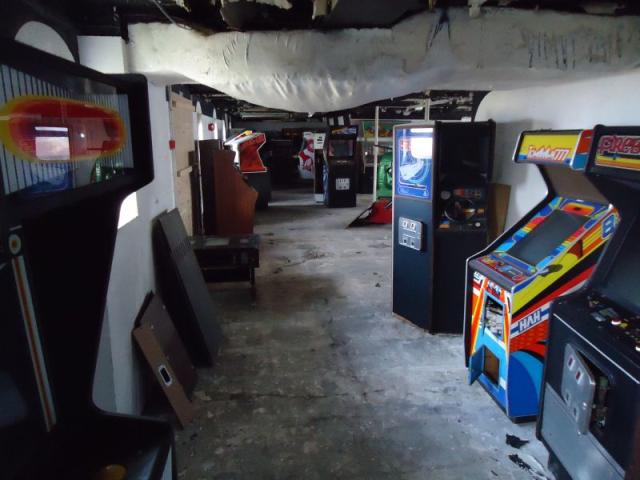 Things start off well as you can see, but it became clear that this was a significant collection of arcade cabinets: 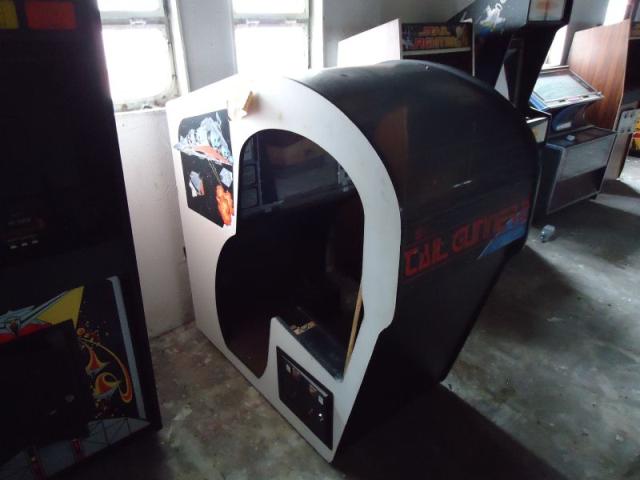 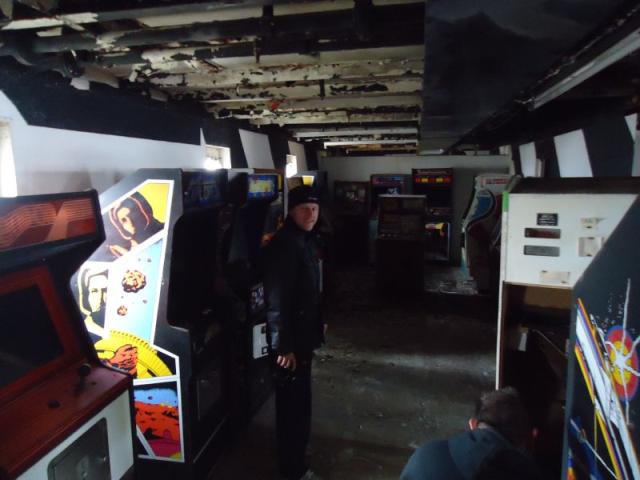 Some very rare pieces were here. Including some interesting bootleg cabs: 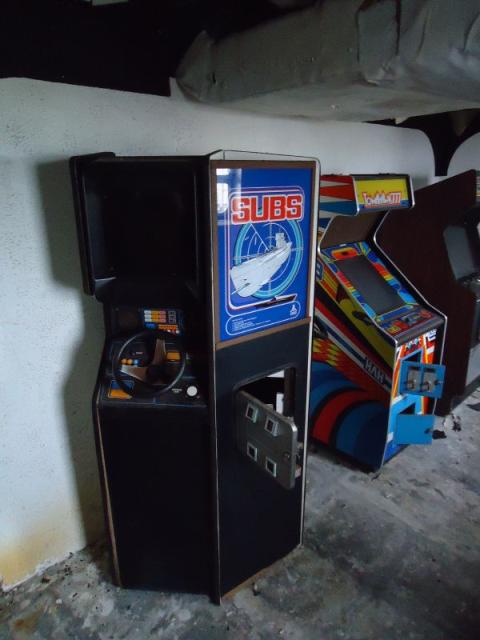 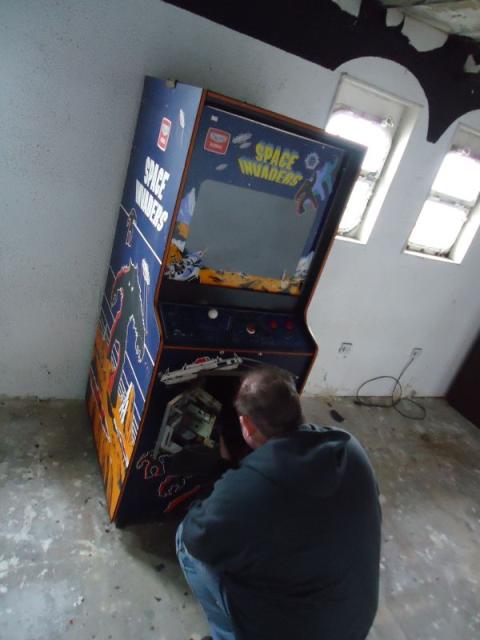 Oliver was blown away by the discovery:

I couldn’t believe all these games had been here and then one day in 1983 the ship was shut not to be opened again due to legal issues. These games saw year after year of summers and winters through the port holes, the sun rising, the sun setting, FOR THIRTY YEARS. They were just sitting there, unsure of their fate, wondering if they would be rescued, wondering if they would ever be played again.

Oliver shot some video whilst walking around the ship (profanity warning):

What followed was pretty messy. There were 8 months of to-ing and fro-ing, with unrealistic assumed valuations put forward by the vendor, and other interested parties sniffing around. Eventually, believing it would never happen, and with real life to get on with, Oliver gave up. Some four months later he was contacted to say that the seller was making enquiries in the marketplace. Oliver instinctively contacted the seller again and finally a price was agreed. A whole load of confusion had been caused, most of which was a result of the seller losing Oliver’s phone number would you believe.

So having almost lost the whole deal, Oliver was able to pull it back from the dead. A further pre-raid visit was arranged, to check that the games were still there. What greeted them was not a pretty sight. A new problem had developed:

Water had got into the ship. Since their last visit, people had been stealing the brass window frames form the outside of the ship to sell for scrap, which allowed the elements in for the first time. The cabs were moved to a safer area, but as you can see, the water was still getting to them.

Any collector worth his salt will tell you that: Arcade Cabinets + Water = Bad News.

What was clear, was that Oliver and his team would have to move quickly to save the cabs.

The seller gave the buyers just 10 days to get the cabs out of the ship, due to impending maintenance works due to be carried out on board. He made it clear that once this work started, the games would be gone. There was no slack given. If the guys wanted the games, they had to come and get them, pronto.

And in true Detective Columbo style, the seller left them with this little nugget:

Oh, and you’ll need a crane…

And he was right. The only way the arcade machines could be removed from the ship was via the outer deck, and given the height of that, a full sized crane would have to be used. What was supposed to be an easy, smash and grab affair, was turning into a logistical nightmare. But the buyers were made of steely British determination, and the hunt was on for a crane, and a bunch of willing buyers with vans!

A herculean effort was required to organise multiple collectors to commit to cabinets, gather payment, rent vans (and a crane!) and project manage everything to get to the ship on the agreed date of February 4th 2012. Around 15 collectors and enthusiasts came from all over Europe to descend on this small town in North West Wales.

So here are some pictures of ‘Operation Lancaster’, where the ship was finally entered, and the cabs released to start a new life after 30 years. Starting with a view from the upper deck loading the carousel for lifting down to the ground:

Here’s the makeshift carousel used to get the cabinets off the main deck:

And here’s a video of the crane in action on the day. Bit by bit, the Duke gave up its secrets:

Once on the ground, the cabs were organised and sorted:

So the net result was that one by one, over 50 classic arcade machines were saved, and the team pulled off what is considered the most audacious arcade raid ever carried out here in the UK. These cabs are now in the safe hands of collectors across Europe and are in the process of being repaired and restored. And this is the essence of the hobby – finding, rescuing and restoring these early games.

This was truly a time capsule. Every game that came out of the hull of the ship was from around 1980/81 and no later. It was quite a find to say the least.

As for The Duke of Lancaster itself? Well it’s still there and its immediate future remains uncertain. There is some talk of turning it into the largest open air art gallery in the world. The ship has recently received an unusual makeover with the addition of spray art by some of Europe’s most famous street artists. Including a painting of the ship’s first captain, a John “Jack” Irwin:

And there she magnificently sits having finally given up her arcade secrets.

Here is some spectacular drone footage of the ship, which nicely demonstrates the imposing scale of the location:

Thanks to everyone involved in the raid, especially Oliver, for allowing me to share some pictures and re-tell the story. I hope I did it justice.

Update 27/05/16 – I’ve been berated (quite rightly!) for not listing the cabs that were rescued. Apologies for this. A complete list can be found here.

If you’re interested in seeing other arcade raids from around the world, check out the archive of previous raid articles here.

Do consider taking a look at some other classic arcade-related articles while you’re here. Just click the links at the top of the page, or subscribe for regular updates below.

See you next week.
Tony