The rarity of an arcade cabinet is very subjective. Just because a game is old, doesn’t necessarily mean it should be regarded as rare. After 1984, when the video arcade market pretty much crashed, the production numbers went down from tens of thousands, to single digit thousand production runs.

So in many cases, you are more likely to find a mass-produced wooden cabinet (like say a Defender) built in 1980, rather than a more recent cabinet produced in 1989, by simple fact that there were less of them made. The more successful machines were churned out in incredible numbers in the early eighties.

This week I thought it would be good to take a look at the way these arcade cabinets from the Golden Era were built, by sharing some shots of the original production lines of the Arcade Golden Era in action. Given the industry rose out of nothing and exploded as a global phenomenon literally overnight, it’s hard to imagine that much thought was given to how to churn cabs out on an industrial scale. But amazingly, the industry managed it in huge numbers, and along the way, billions of dollars were made. Money is a great motivator.

These Golden Age cabs were largely made of wood, and employed cheap, dubious labour. Various documents exist showing the total cost price of producing an arcade cabinet. Here is a scan of an original Atari document that breaks down a Missile Command upright by its component parts with costs attached to each: 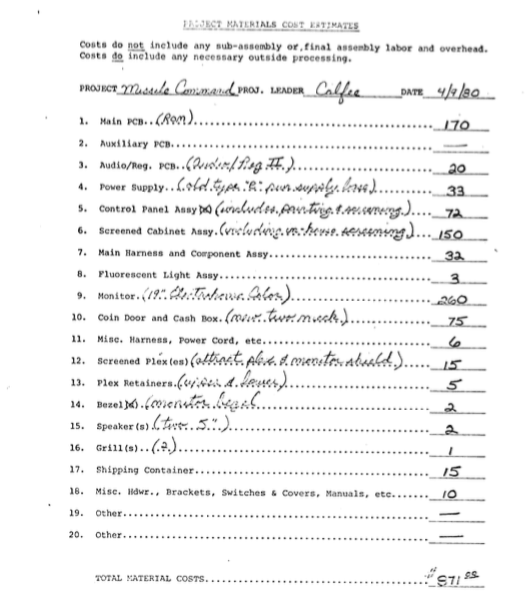 You can see that a Missile Command upright cab cost $871 total in raw parts. Consider around 14,000 Missile Command uprights were produced and sold to operators between 1980 and 1982, at a per-unit cost reported to be $1,995, and you get an idea of the sort of profits to be made back then. Literally millions of dollars were at stake from each game in hardware sales alone. So a slick, efficient production line was vital to the manufacturers’ success.

I suppose starting with Atari is as good as anywhere. It seems they made it up in the early years – learning their craft as they went. Tales of cabinets rolling off the production lines in the mid 70s smelling of marijuana are bounded about, but by the heydays of the early 80s, Atari had become a slick operation. The darlings of the industry had to learn quickly. Their first mover advantage, coupled with learnings from their output during the decade before, meant they were able to churn out hundreds of thousands of arcade machines over a relatively short period of time, and as you can see from the following pictures, there was quite a bit of sophistication and organisation going on.

Pong of course, was the game that put Atari on the map. Here’s an early picture of Atari’s Santa Clara factory in full swing:

Compare that, to the way Atari’s factory looked a few years later. Here, the Centipede production line is in full swing. Around 45,000 of the upright cabinet version were produced in 1981, making it one of the most successful releases in Atari’s history: 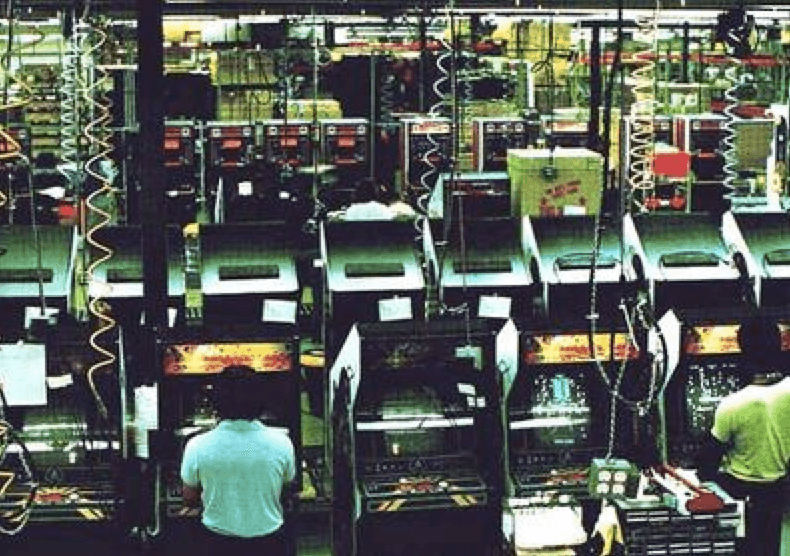 Moving on, a couple of rare pictures showing rows of Missile Command and Battlezone uprights ready to ship out to arcades. 14,000 and 13,000 of these machines were built respectively. These were captured in the early part of 1980 at Atari’s Sunnyvale manufacturing plant in California.

Much credit is due to Atarigames.com for finding and sharing those two amazing images with the world.

I took a few screen caps from an old video taken at Atari’s production line around 1981/2. Here, a technician is building Power Supply units. Anyone familiar with arcade restorations and repairs will have taken a few of these apart for repairs in more recent years:

You can spot the familiar “big blue” capacitor of Atari’s PSU unit in the top picture.

And here, an almost complete Crystal Castles is ready to roll off the factory floor. Enjoying a production run of nearly 5,000, this is surely one of Atari’s most beautiful cabs: And this looks like the sides of a soon to be Atari Star Wars upright being cut and prepped ready for side art application. 11,000 upright units of Star Wars were produced:

One of Atari’s later releases, Kangaroo is pictured here. 9,800 of these cabinets were made: And here you can see one of the huge printing screens that would apply ink to the vinyl  side art of Atari’s games. If you know your stuff, you should recognise the art from one of Dig Dug‘s 10,500 upright cabinets being worked on in this picture:

Really cool to see that process in action. From there, with artwork applied, the wooden sides would be placed to fully cure before assembly. Here we see racks of Millipede sideart waiting on the final cabinet build process. Interesting that t-modling appears to be already applied: 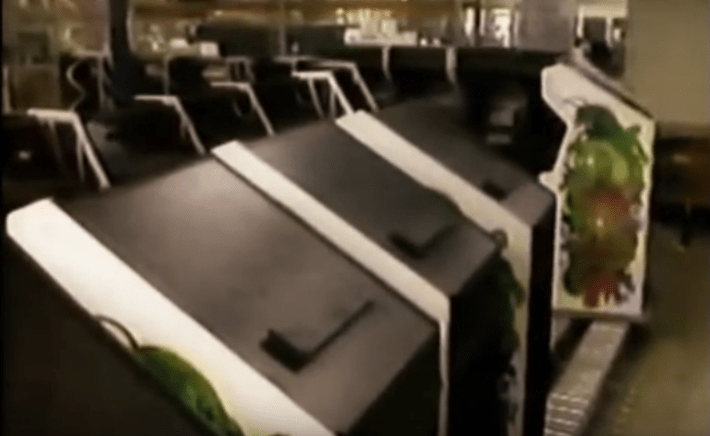 More relevant to me as a UK-based collector are these great pictures taken at Atari’s European manufacturing plant in Tipperary, Ireland. At just over 30,000 square feet, the intention was to turn this former kitchen cabinet production facility, known until then as Murray’s Kitchens, into the beating heart of Atari’s European manufacturing distribution. At first, the place was hugely disorganised, and the sudden arrival of Atari execs to tell the staff how life was going to be, came as something of a shock to the local workforce.

At first, they were only able to produce 20 of the new fangled Atari cabinets each day, still trying to get to grips with the change (and probably still hanging onto a lackadaisical 70s Irish workforce ethic).

Sensing disaster, the Vice President of Atari US sent a task force across the Atlantic to sort things out. James Riordan was the head of the team flown over, and describes what happened:

When we arrived at the plant, fresh off the plane , I was greeted by a room full of English engineers who, before even introducing themselves, asked sarcastically, “What makes you think you can do this any better than we are?” I said , “Because gentlemen, I am making 500 arcade machines a day in the United States and my boss told me to either make this place perform or turn it into a badminton court, so I expect you gentlemen to either work with me or go buy some badminton racquets and I’ll be on the next plane back”. Let’s just say they had an immediate change of attitude.

And so with that awkward start, new production lines were built, systems were streamlined, staff were retrained, and within eight weeks, Riordan had this small Irish town churning out over 150 Atari cabinets every day for distribution across the European markets. The staff were motivated and worked hard. This plant alone, added $1 million of earnings to Atari’s bottom line every single month.

Here you can see a partially completed row of Atari cabaret cabinets at the Tipperary plant’s heyday. This design could house either Missile Command or Asteroids:

I wonder if my Asteroids cabaret is one of those pictured here. The cocktail tables you see were more generic and could house one of many Atari’s hit games produced during this early 80s era. Also notice the interesting looking white cabinets up on the rack there to the right. I can’t quite make out what they were, but look like samples sent in from the US perhaps? I now own three Atari Ireland cabinets, and all of them would have been built here.

Anyone familiar with Nintendo’s arcade cabinets will recognise the designs in these shots. Being of Japanese heritage, Nintendo quickly realised the efficiencies that could be made by having a single cabinet design, that could be repainted to represent different games. This generated a huge ongoing cost saving for them over their contemporaries like Atari, who favored a bespoke design for each cabinet. Here, we see row upon row of orange Mario Bros and Donkey Kong Junior cabinets, along with earlier black and white shots of Donkey Kong, released a few years prior, which was light blue in colour. Different colour, same cabinet: 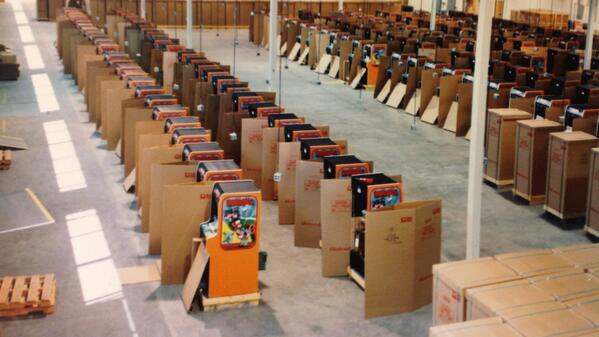 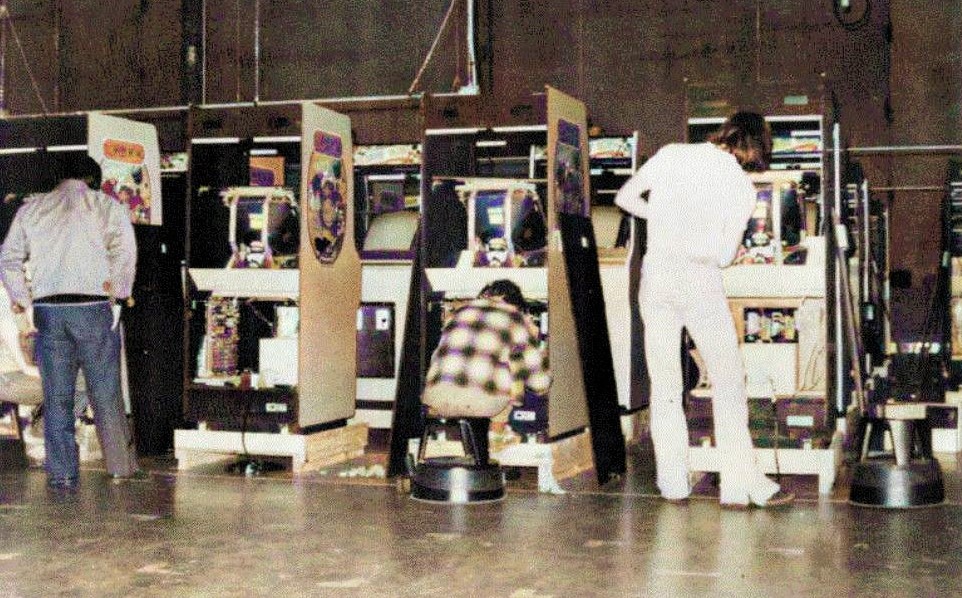 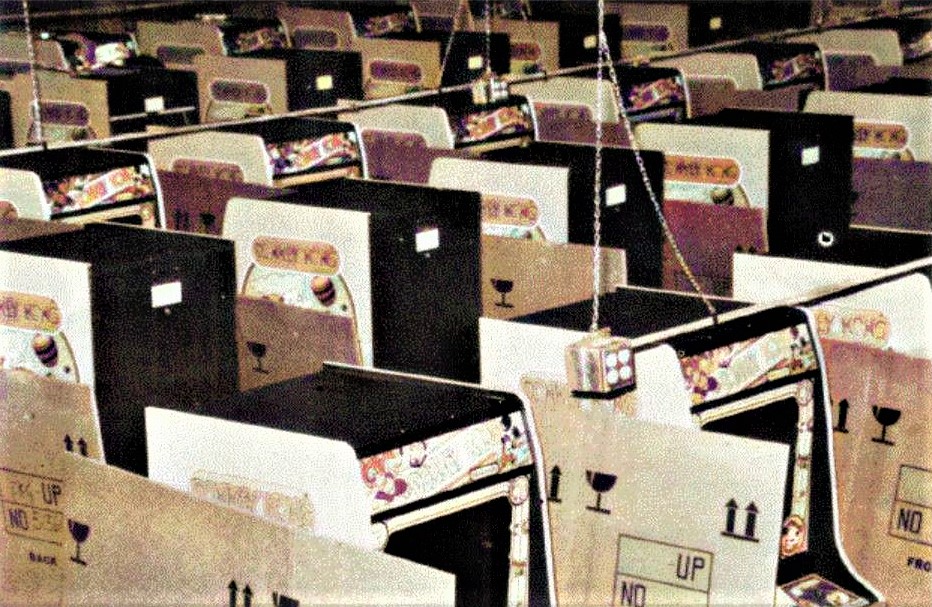 Williams saw great success in the early eighties, thanks to the genius of Eugene Jarvis and his small team of programmers. Among several titles including Robotron, Stargate and Sinistar, Defender was perhaps their most successful title, resulting in a production run of tens of thousands of cabinets. Here we see Williams’ Illinois manufacturing plant in action: 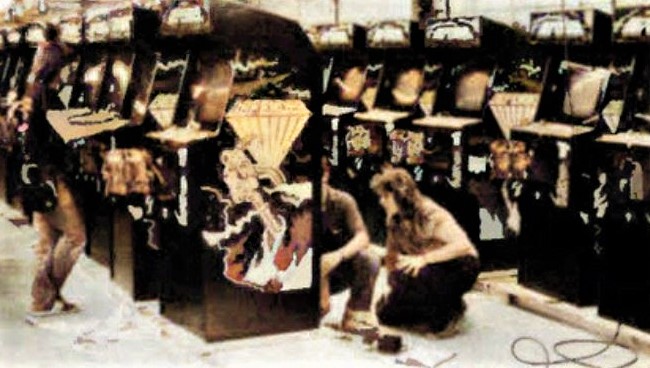 Notice the cab in the last picture. This was the famous “gold” cabinet, which represented the 50,000th Defender to roll off the production lines. It was placed inside the canteen at Williams for many years as a reminder to staff of the success of the company, before being forgotten about and left in a storage facility long after Williams closed it doors in the late 80s. It was rediscovered in 1999, fully restored and repaired, and presented back to former Williams CEO Mike Stroll, who still owns the cab to this day.

Pacman and Ms Pacman remain two of the most successful production runs of any arcade cabinet in the USA. Well over 100,000 of each of these units were produced by Midway to satisfy the demand generated by the game, at a rate of over 500 every day. Some shots and a great video below: Being able to see the sights and sounds of the original birthplace of these iconic Midway cabs some 35 years later is great.

Another British manufacturing plant pictured here. Streets managed to secure a distribution deal with Williams, to churn out licensed versions of their more successful games back in the day here in Europe from their factory in England pictured here. Note the cool 80’s cars and “Streets” logo on the building: 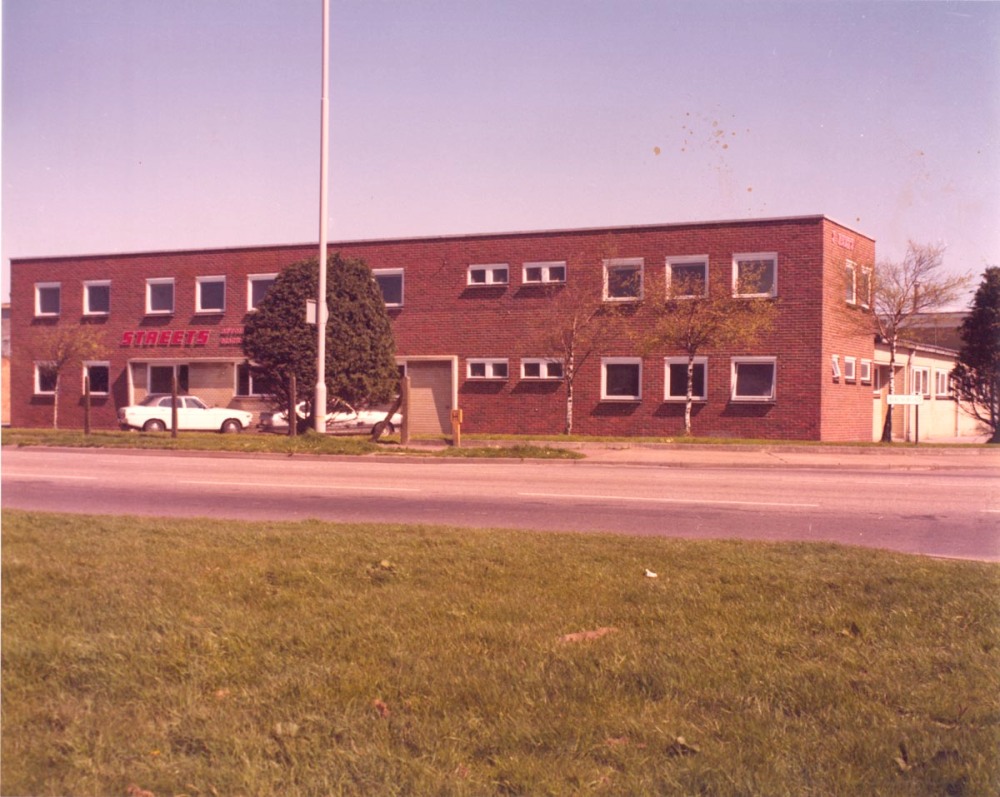 Here, a multitude of the spangly Streets cocktail version of Defender are being worked on by technicians. A few of these have come up on eBay UK recently, so they are still out there:

My own soon-to-be Robotron cabaret, which started life as a Streets Stargate cabinet, would have been built on that very same factory floor.

To finish up, I have a few more random production line pictures here that I thought I’d share:

This cool picture is from a promotional flyer produced in 1982 for Zaxxon by Sega Gremlin, showing row upon row of Zaxxon cabinets on a “burn in” test – essentially where a machine is left on for an extended period of time to check components are working correctly before leaving the factory:

Warren Davis’ iconic Q*Bert game is shown here, ready to go out the doors of the Gottlieb factory to arcades across America:

A shot of Taito’s factory in Tokyo in the late 70s, with Space Invaders being fork lifted around: 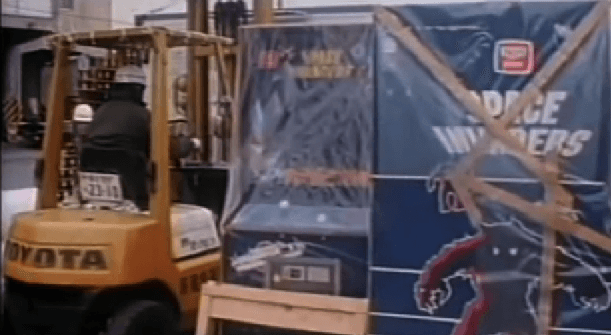 Bologna, Italy was the home of Zaccaria, who produced pinball and arcade machines from the early 70s until 1988. A handful of shots exist of their operation:

And that’s your lot. Thanks for reading. Do leave a comment below if you have anything to add.

Consider subscribing at the foot of the page to be notified whenever the blog is updated.

See you next week!