You have to move quickly when you get a sniff of acquiring a classic arcade cabinet that’s been stored away somewhere. As a fellow collector/restorer always reminds me, there’s no honour in buying and selling arcade machines. This is particularly true right now, as the supply has dried up. Very few machines are coming to market, and the ones that do are fought over tooth and nail. This has driven prices up significantly, creating an environment of every man for himself. It’s dog eat dog out there.

So I thought I’d share some pictures of a cab I managed to snag a few weeks back from a guy clearing out a storage container. It was all very last minute and I had to move quickly – my fellow collectors here in the UK would think nothing of moving in and screwing up my deal. Despite buying blind bar a few pictures, I did OK (phew!)

I met the guy at his house and he suggested I follow him in my car to the container which he said was 5 minutes away.

5 minutes drive became 10 minutes, became 15 minutes, became 20 minutes, and we were getting further and further away from his town. We ended up in the middle of the countryside. I had no idea where we were. He finally turned off the road and down a track. The track got narrower and more bumpy, we made several sharp turns and were clearly travelling downwards. Eventually we arrived here: 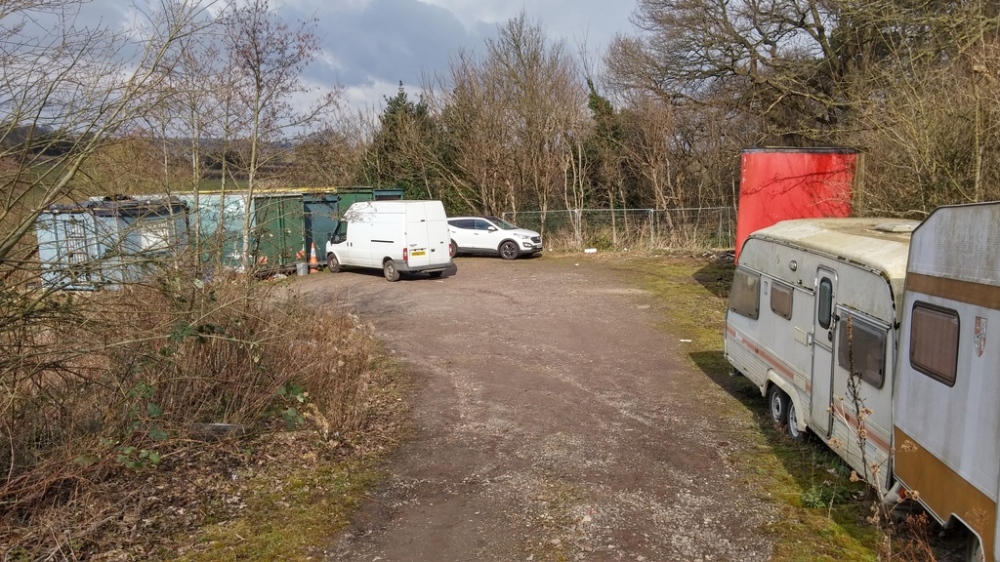 I suspect you can’t get a sense of it from the picture (that’s my SUV and his van), but I imagined this was the kind of place Tony Soprano would take hoodlums to be executed and made to disappear. The place was absolutely silent, and its just me and him bar a few vultures circling overhead.

OK that last bit was a joke. Sort of.

So this is at least a half mile away from the nearest road when we got to these containers, and I’m thinking to myself that I didn’t know this guy, no one knew where I was and I was there with nothing more than a wad of cash to keep me company. He wasn’t the most talkative bloke either, which made the whole experience a bit unnerving. A quick glance at my phone told me there was no signal.

The cab was in this container. 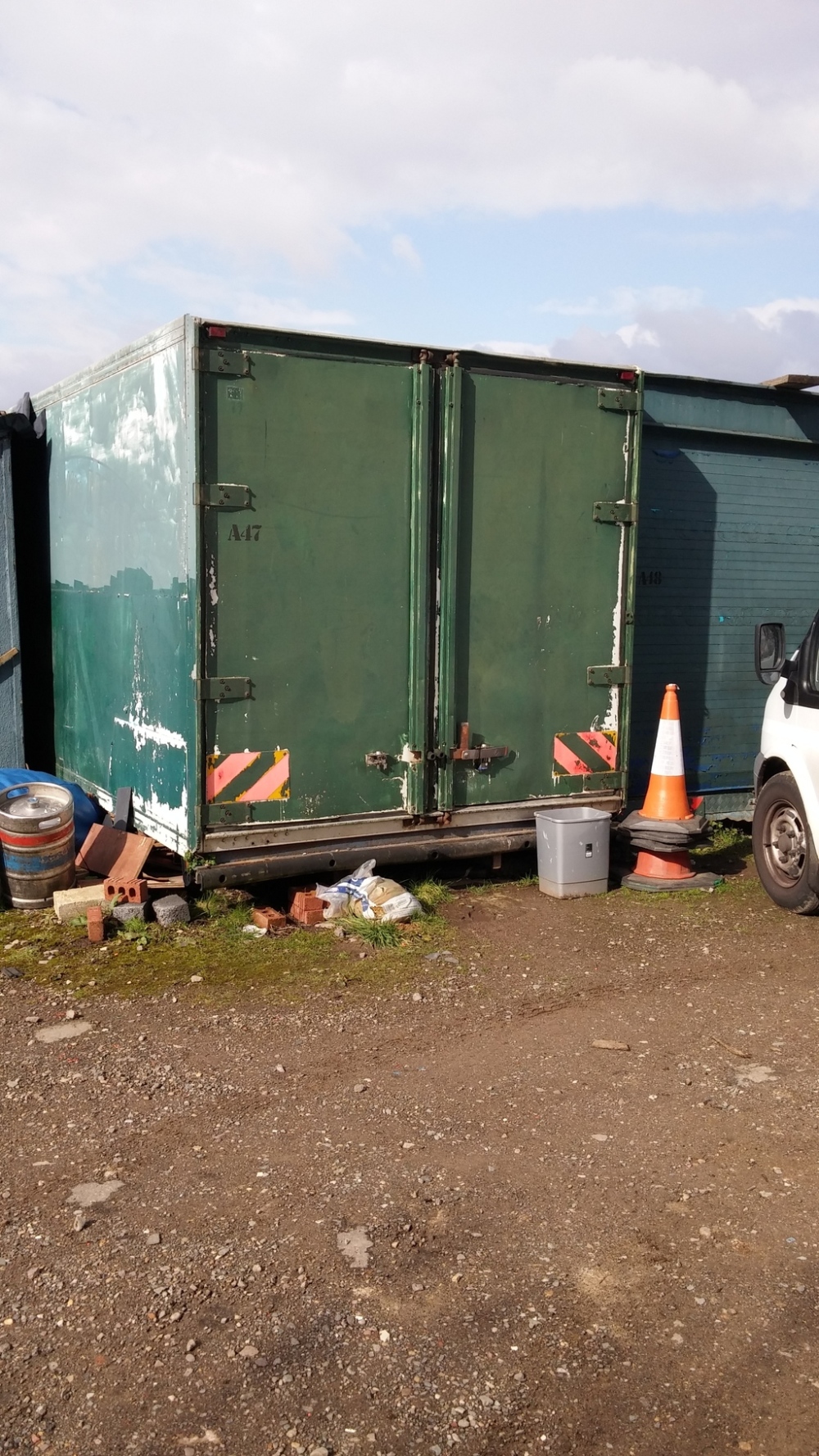 No words were exchanged. He unlocks the padlock and opens the door, holding it in place. It’s pretty dark and dank, and the cab is in there 20 feet towards the back by itself, staring back at me. An original 1981 Atari Centipede upright arcade cabinet! This would have been built in Atari’s European manufacturing plant in Tipperary, Ireland.

He looks at me. I look at him. He holds his other arm up, gestures in the direction of the cab, and says “After you”….. 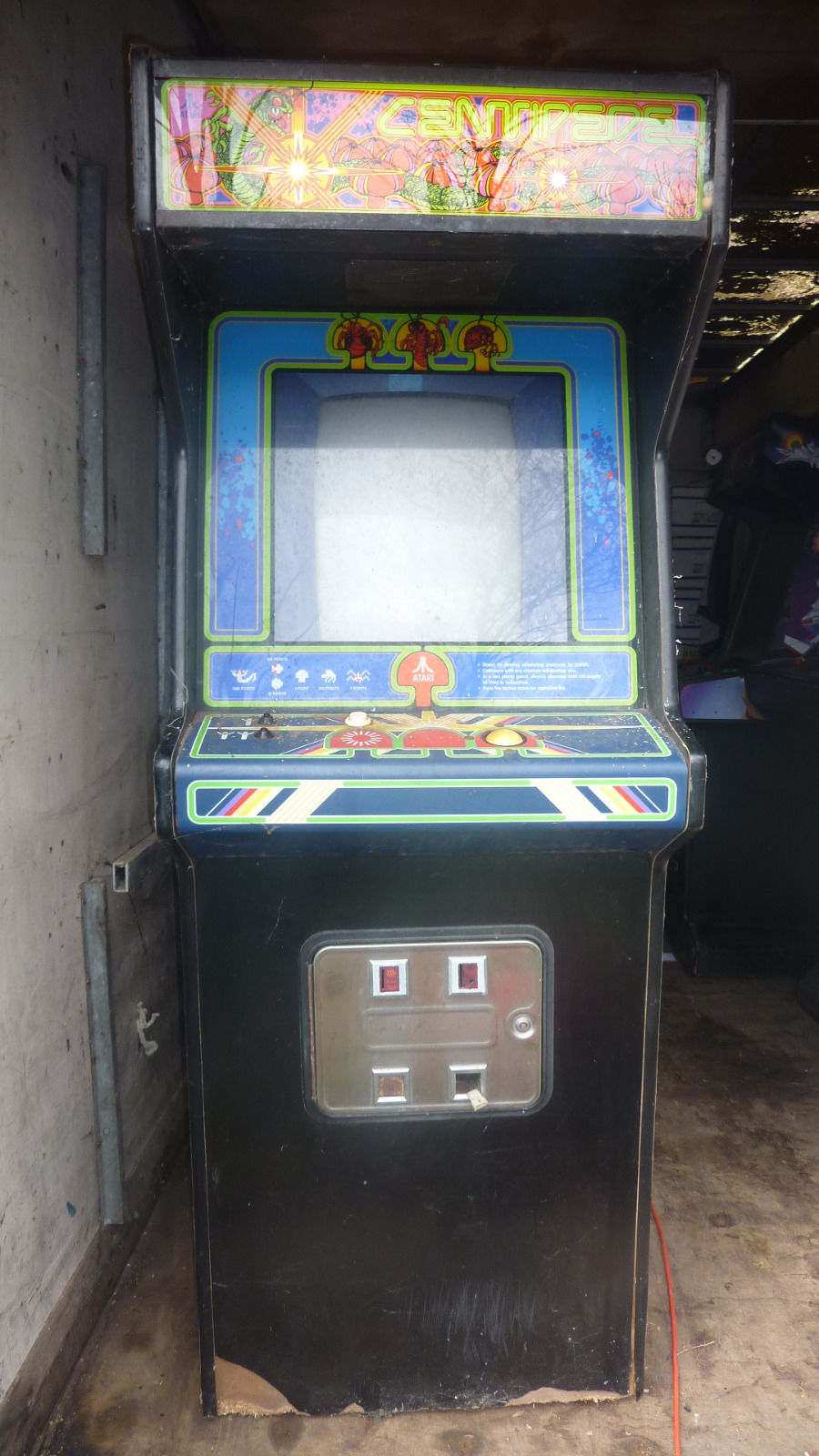 I put my brave face on and confidently clambered in. Having already agreed a price over the phone, I was there to buy, so was quite relieved to see the condition was as described. It was far from perfect, but in decent enough shape to give me something to work with. Knowing he’d had other interest, my plan was to get there, do the deal and get out again, before he could club me on the back of the head with a wrench, or change his mind, or hang around for other offers, which I’m sure would come in higher than the price we’d agreed. So after handing over the readies, we squeezed the 6 foot cabinet into my SUV. 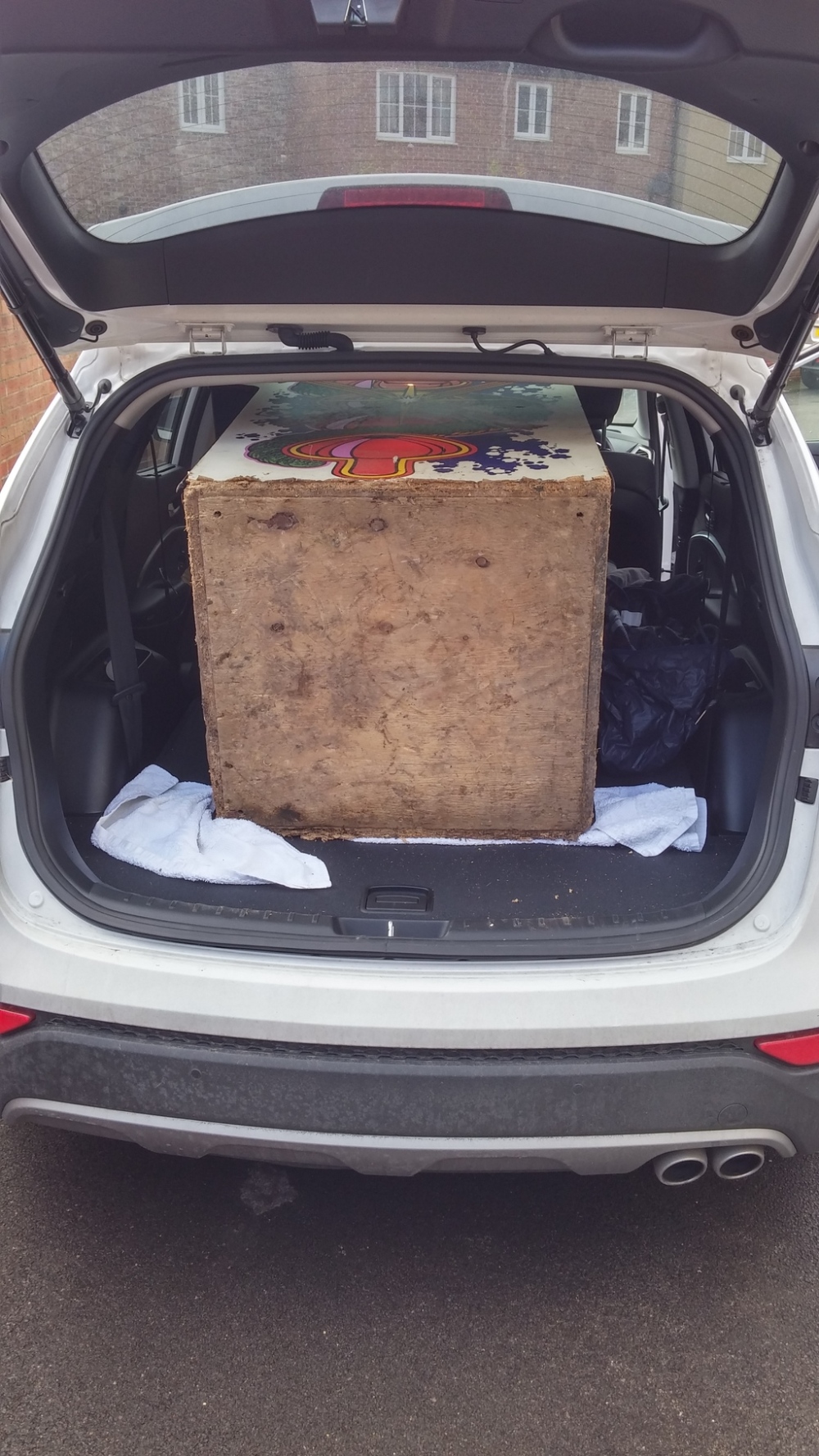 it was a tight fit, but we got it in there with a bit of manipulation. Back home, I got the cab unloaded and took a few pictures. 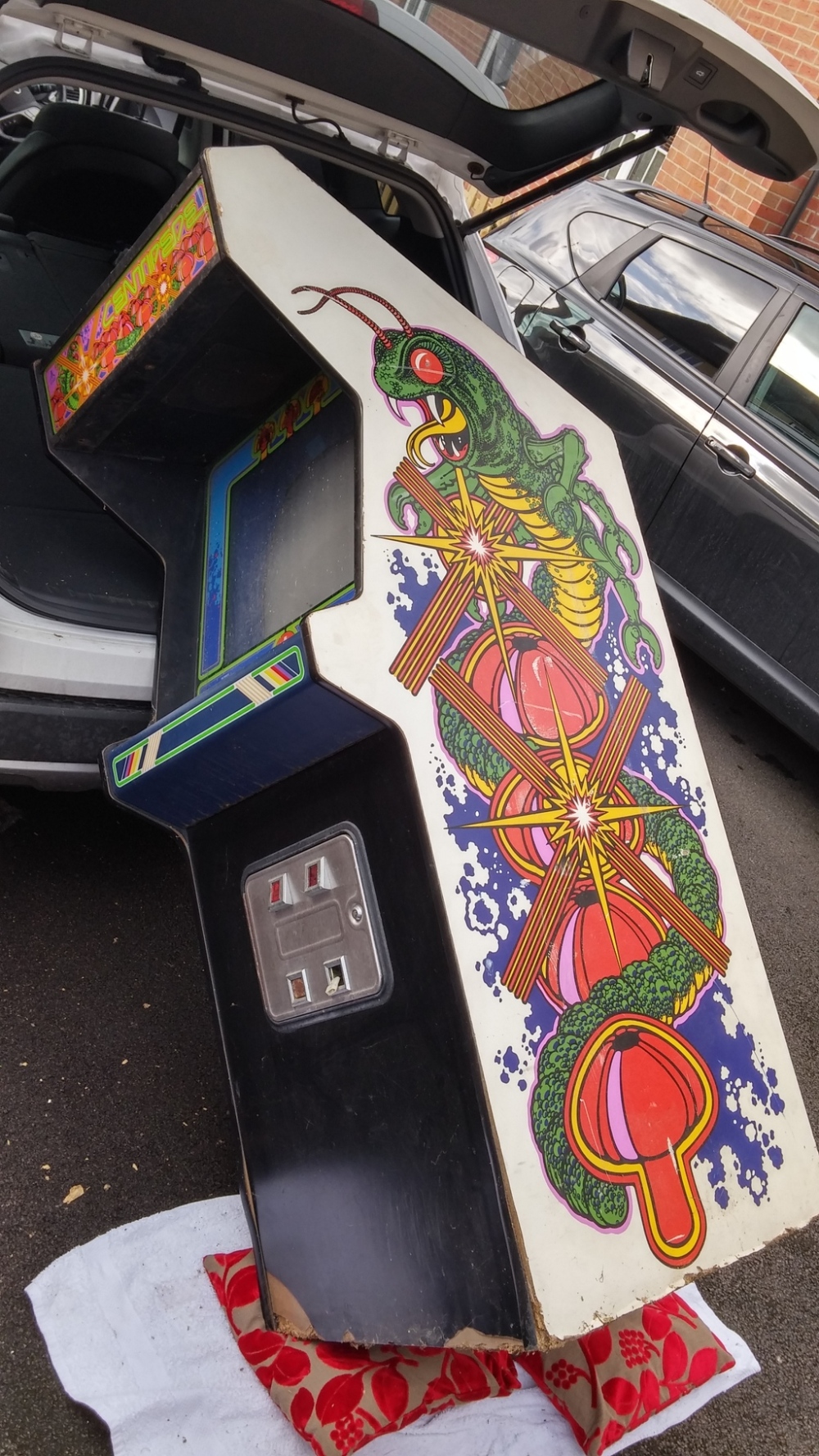 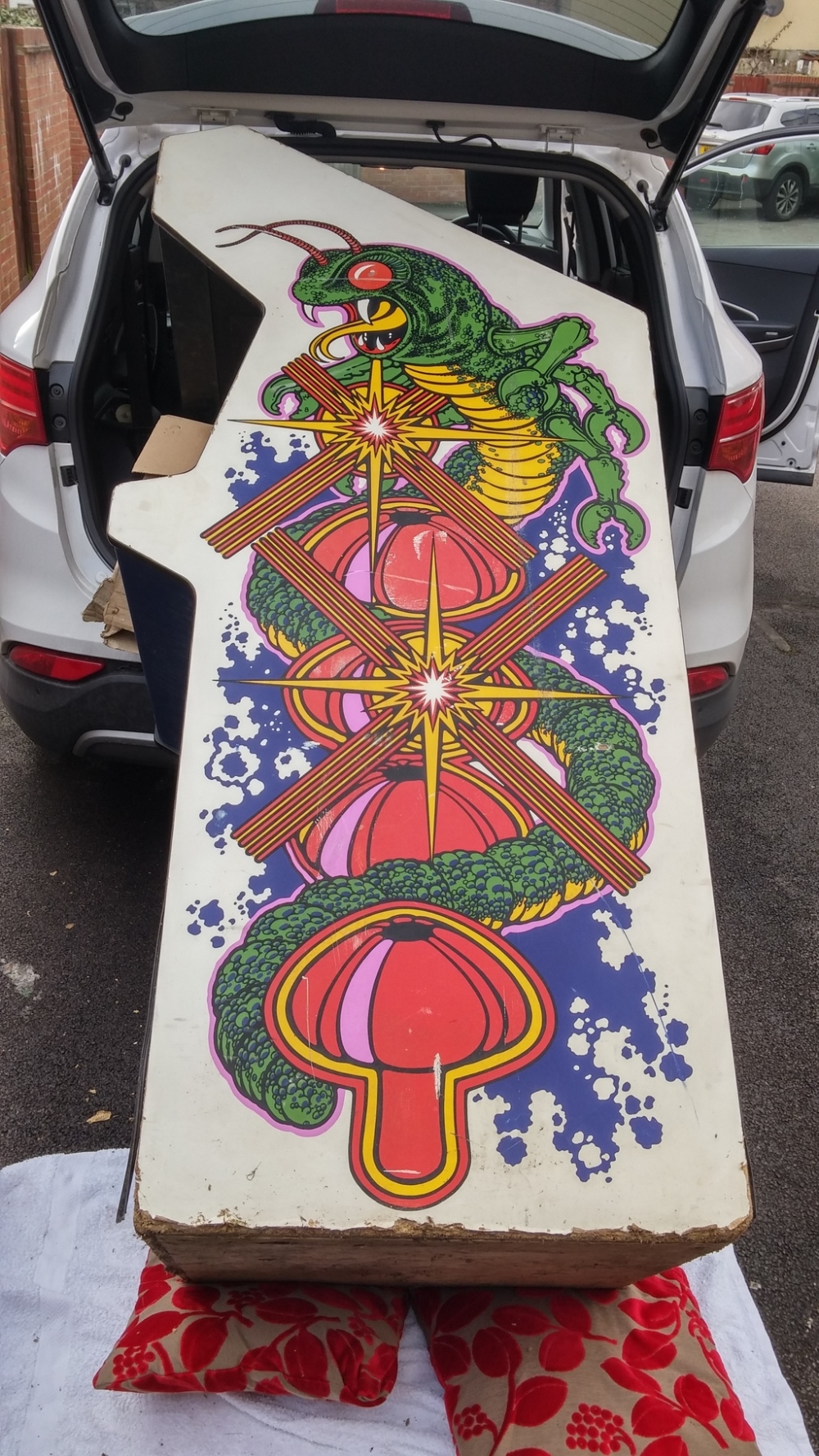 It’s not too bad. The area requiring the most attention, is as at the bottom of the cab as you can see. This is fairly typical of most stored arcade machines. They lose their feet at some point, and people drag them around without too much care or notice that they are grinding the wood away at the bottom edges and corners. I’ve seen it time and again. It’s a pain in the ass, but fixable.

Here’s the worst of it: 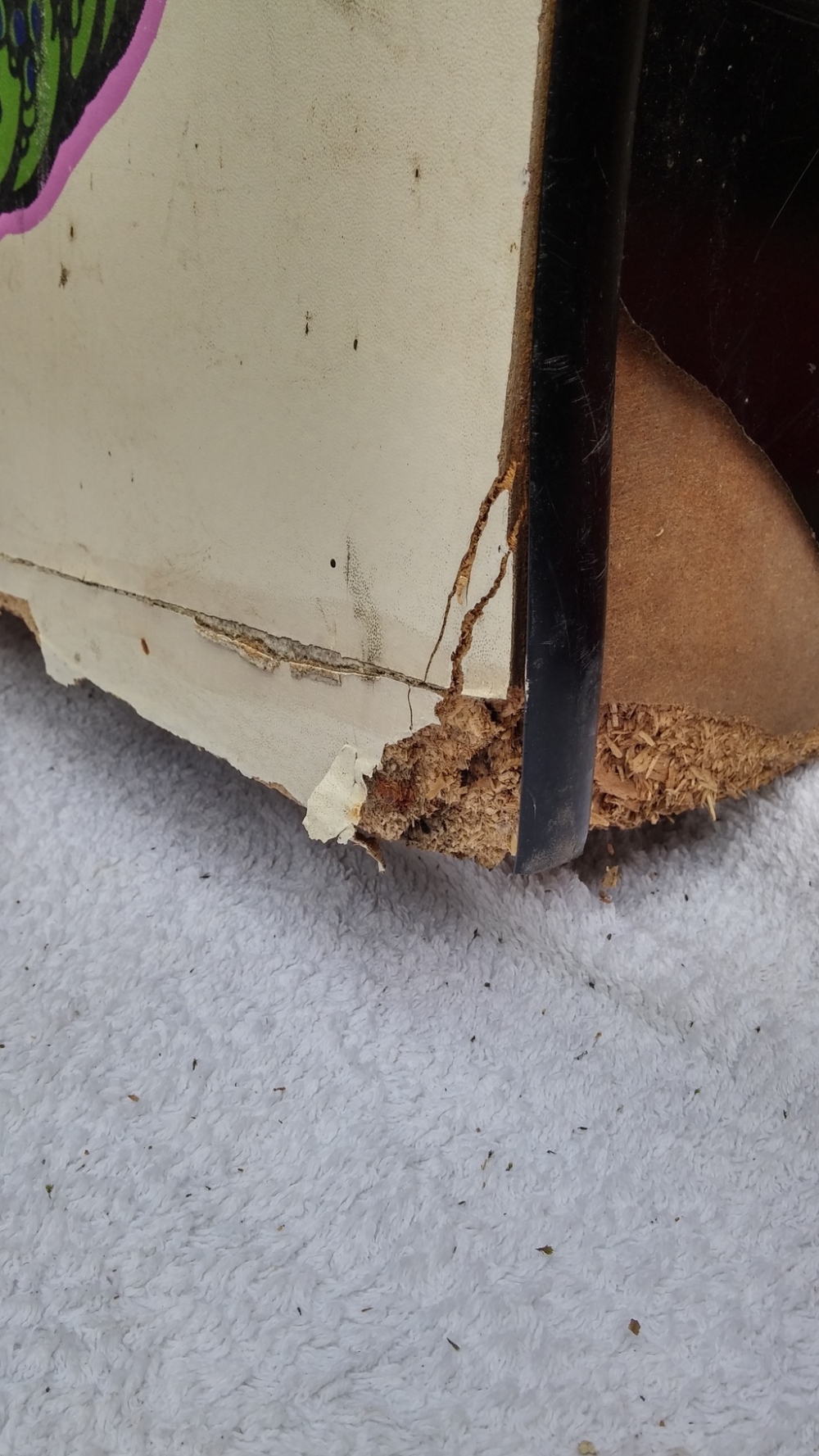 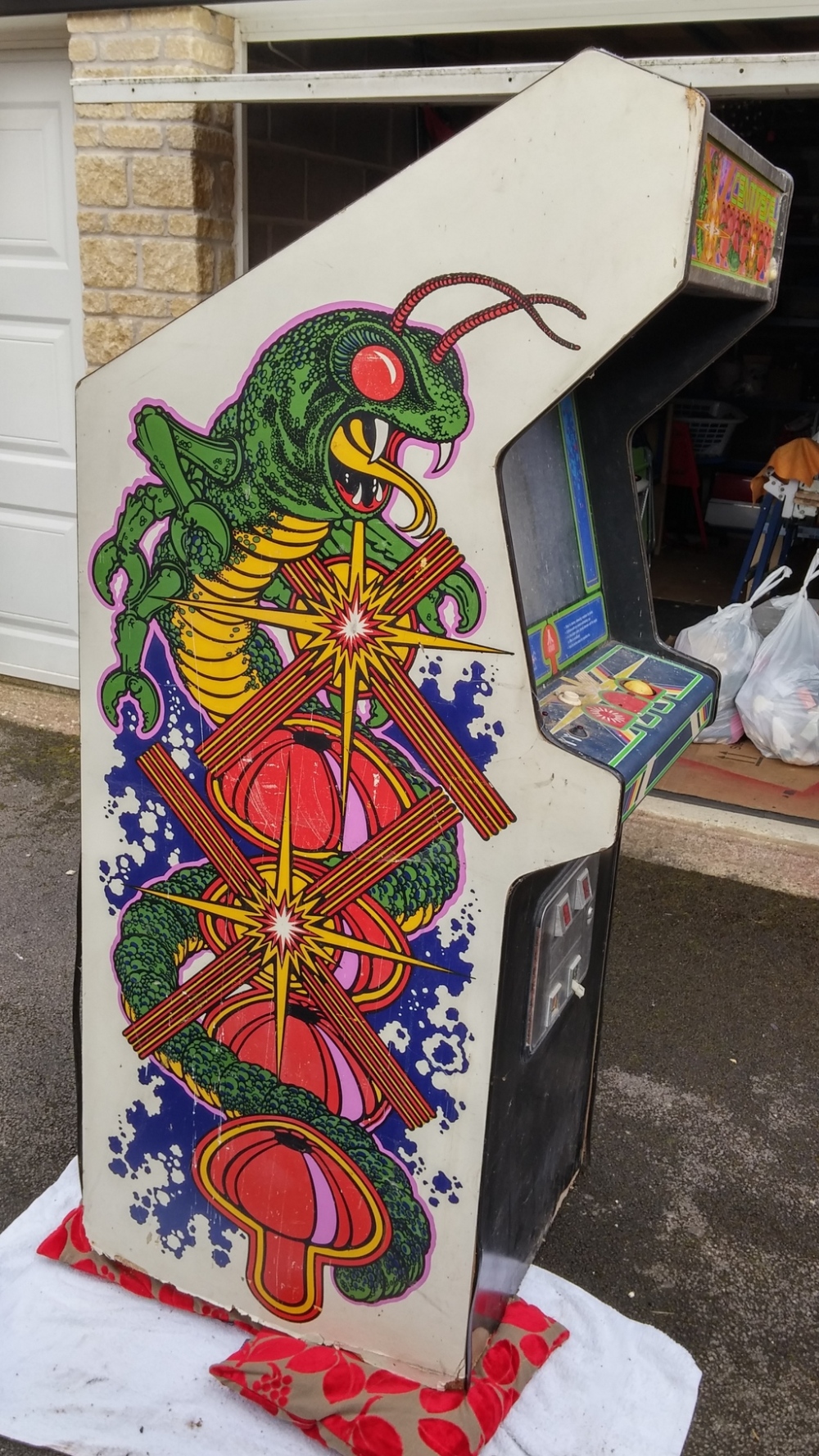 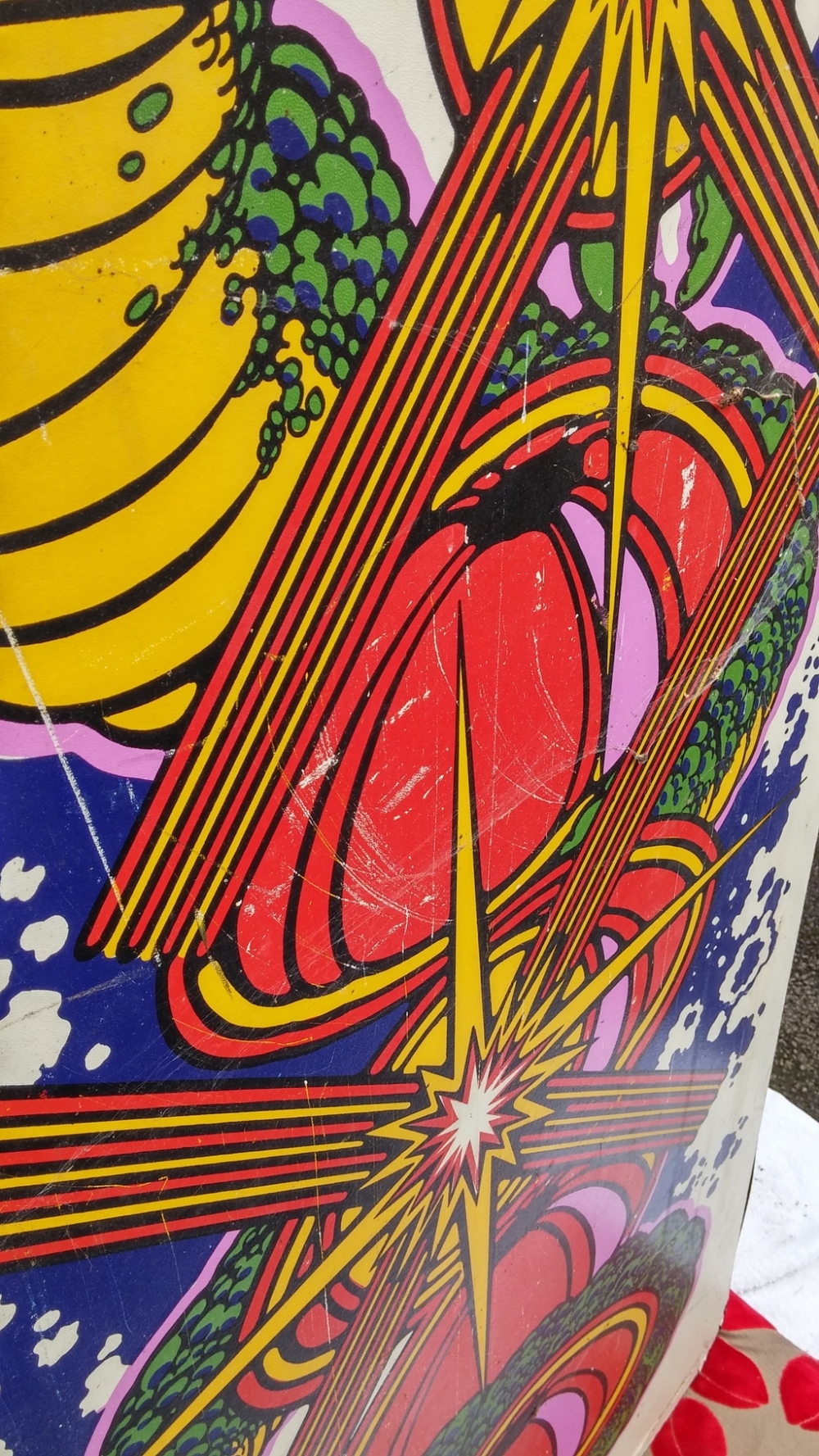 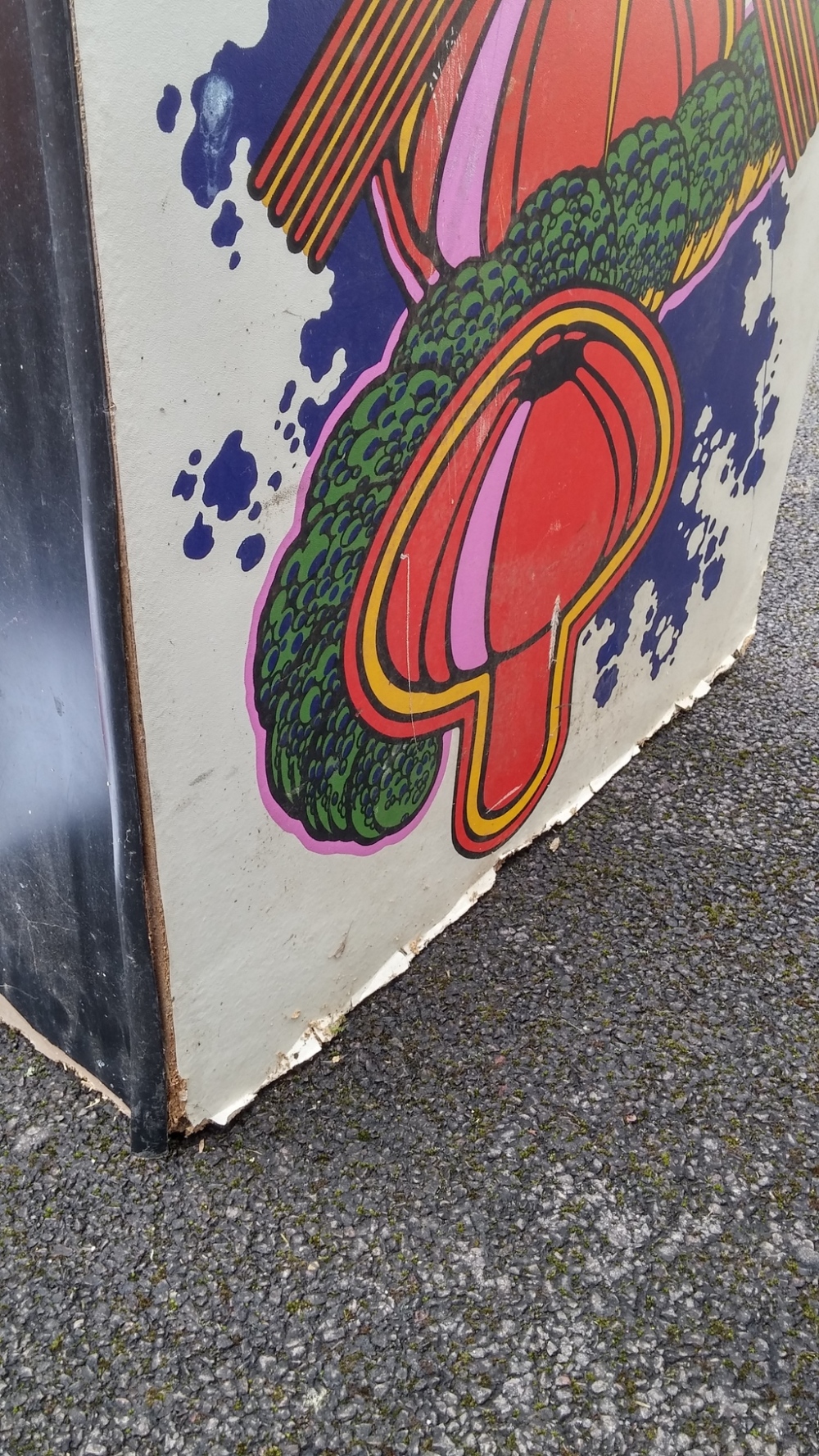 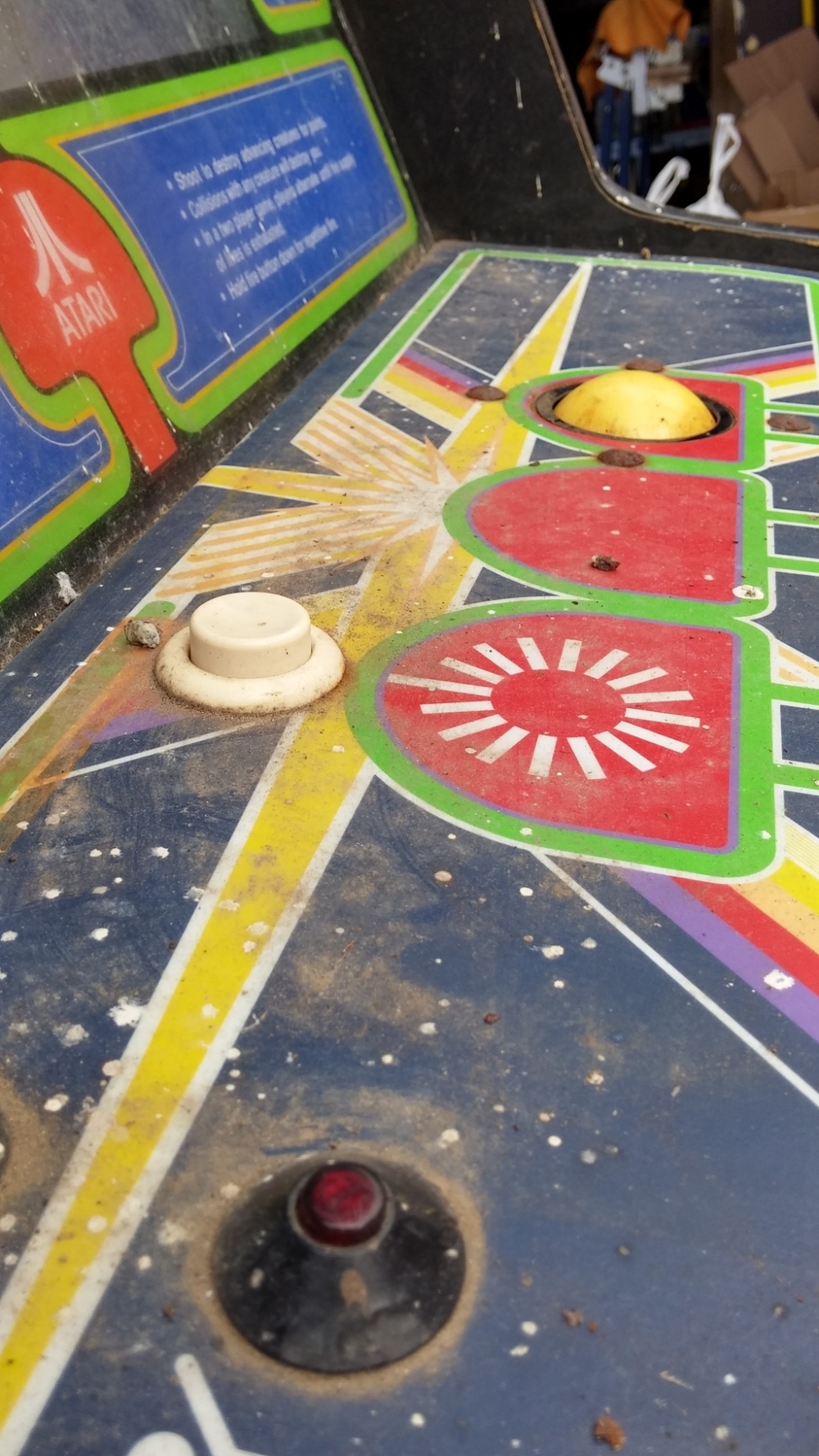 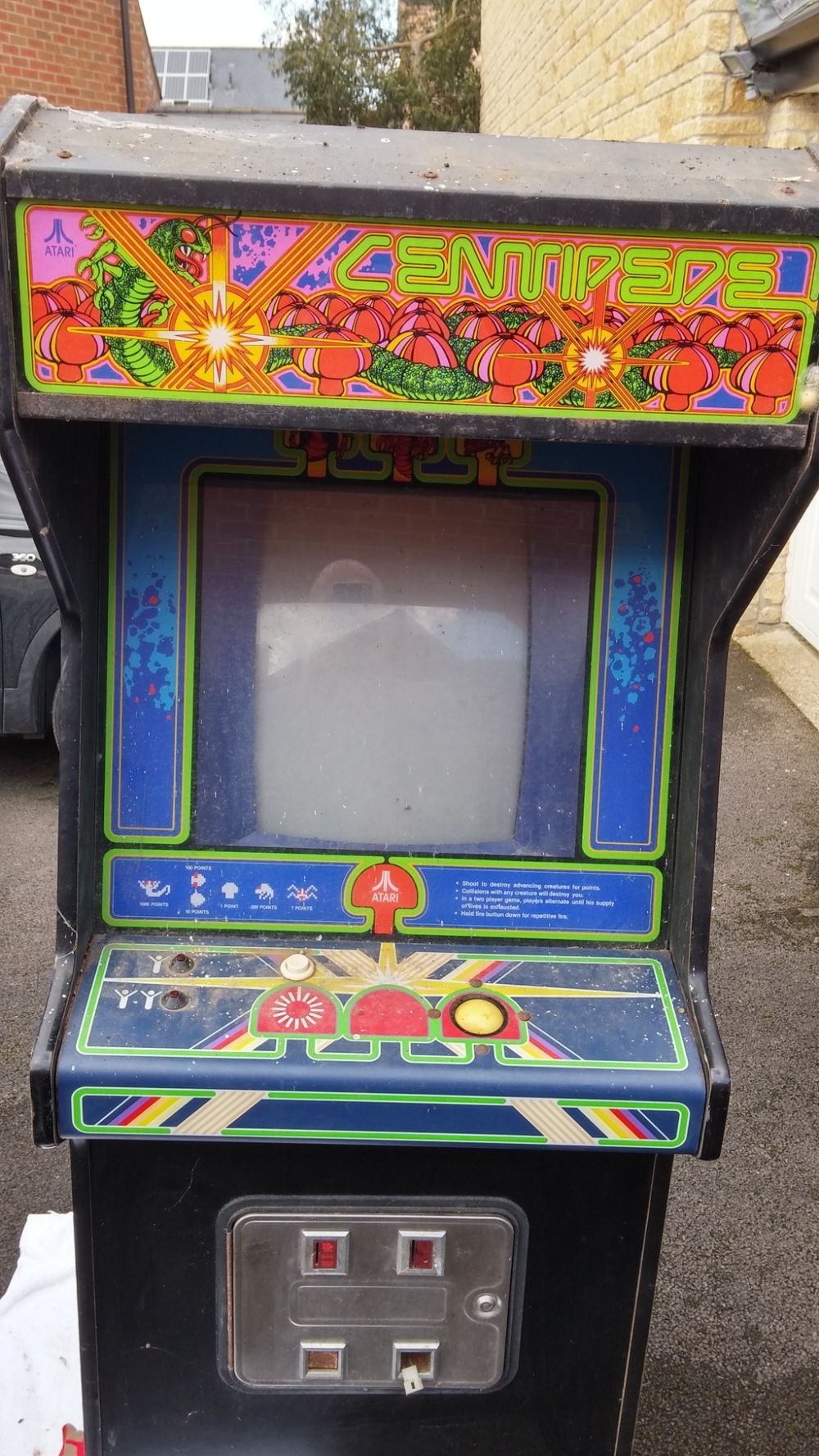 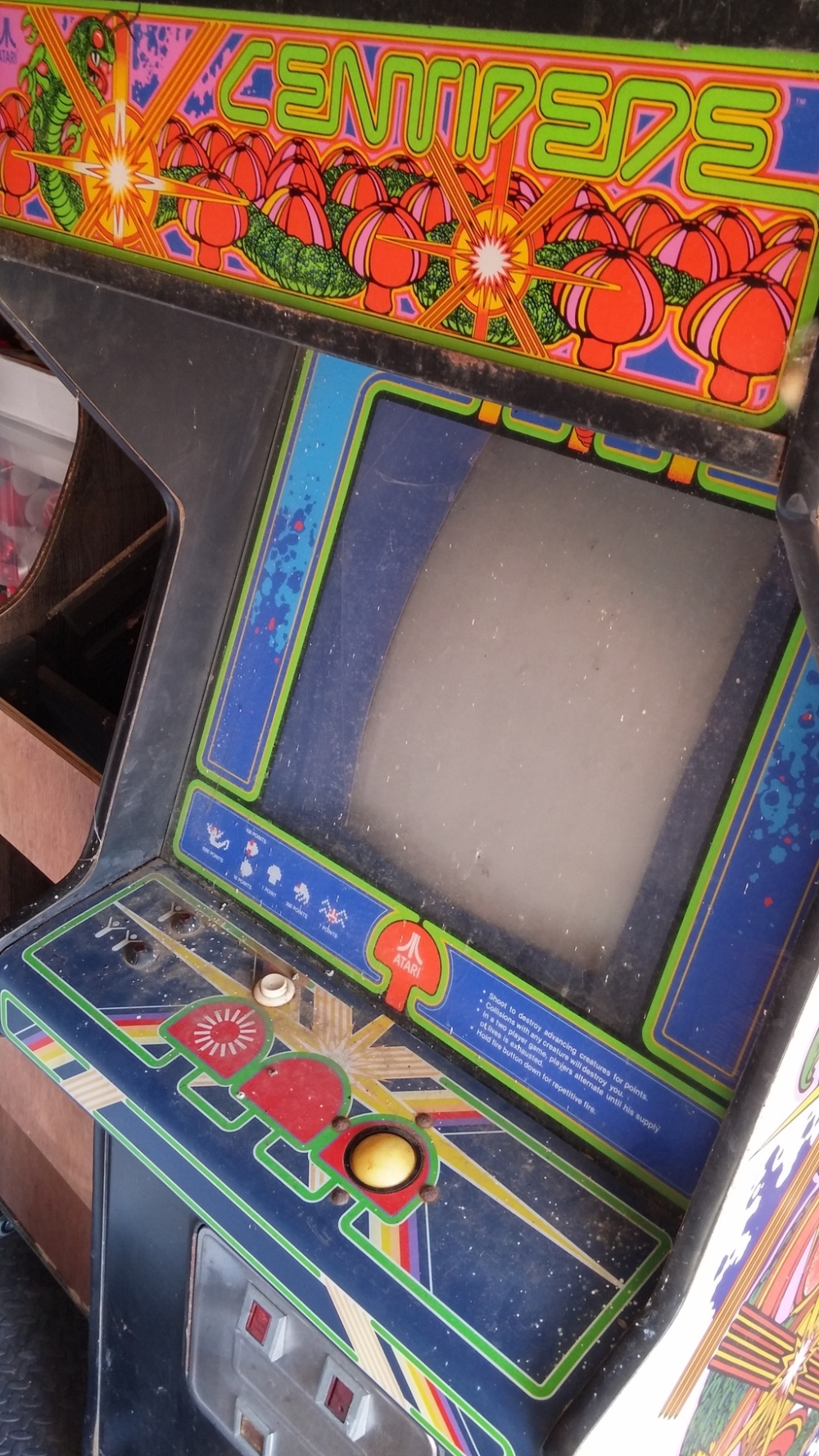 It is very grubby. That’s 25 years worth of bird shit, dust and grime. But the iconic artwork itself isn’t too bad and will clean up nicely. To use a collector term, this is in unrestored condition.

Inside is complete. Again, nothing a good clean up won’t fix: 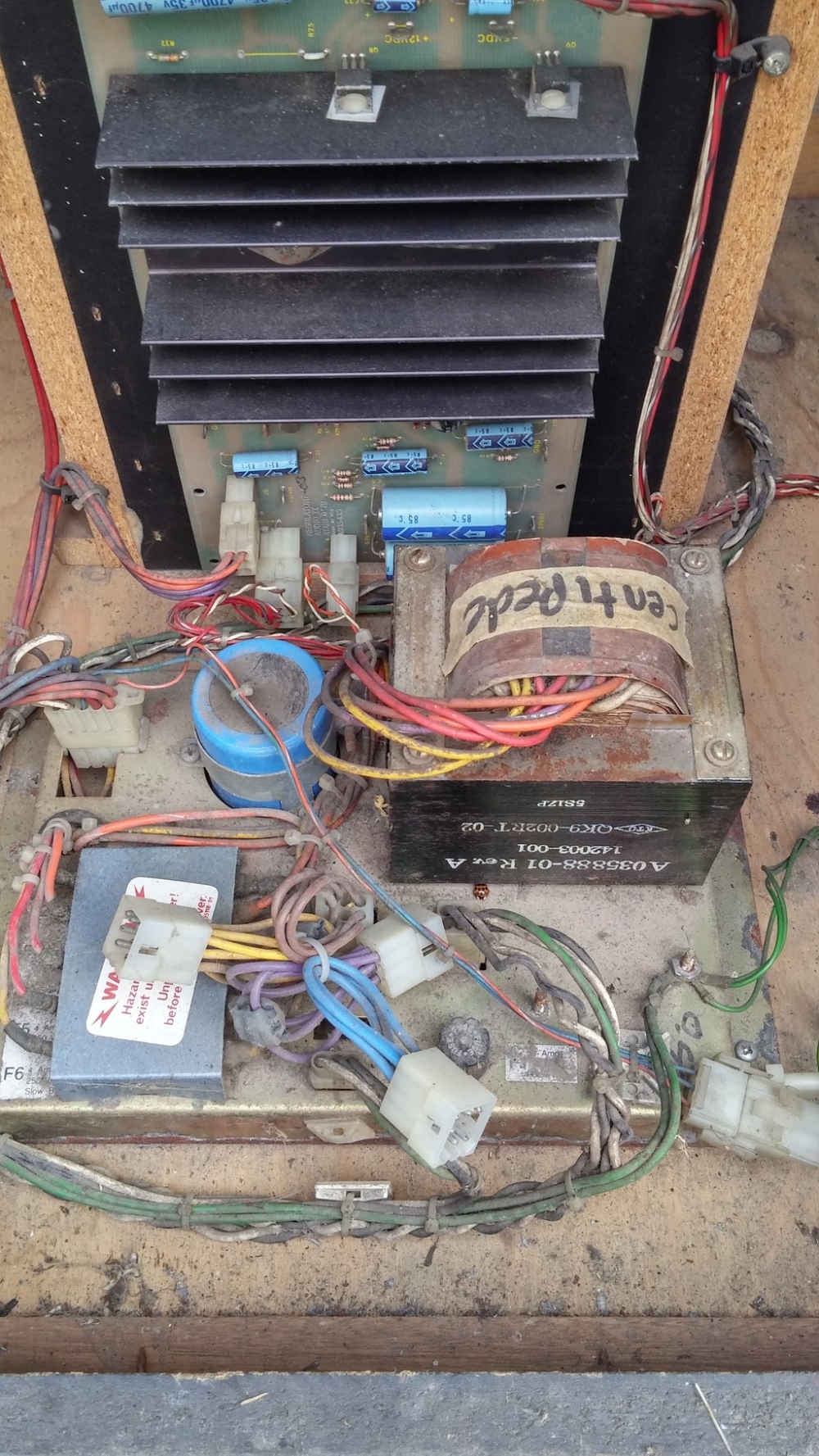 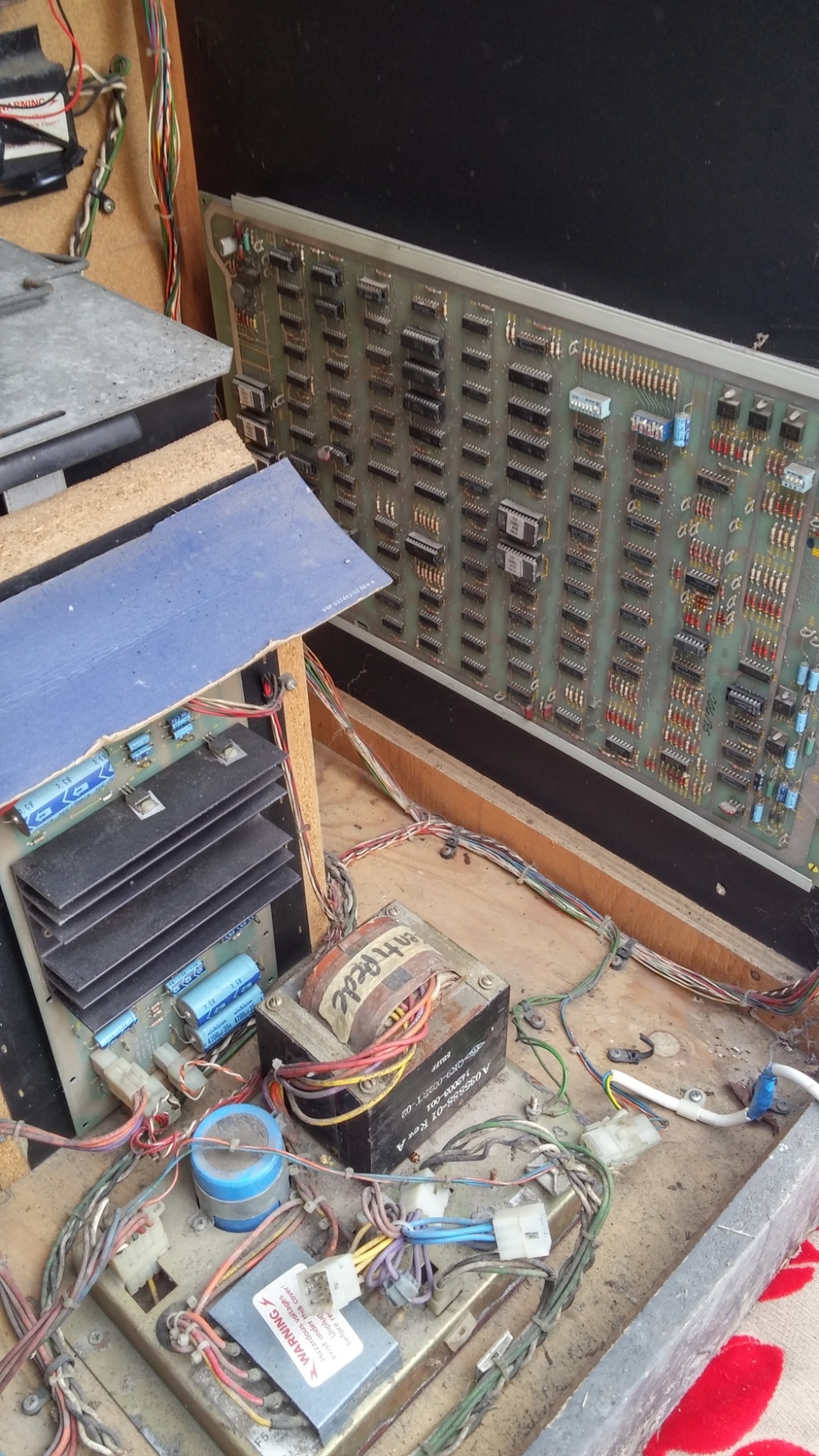 It’s filthy, but everything is there and supposedly working – just the monitor isn’t giving a picture. The good news is it’s all fixable. I have a spare working Centipede boardset, so we’re half way there already.

Looking forward to getting my restoring hat on and giving this a good clean up and fix when the weather improves in the coming weeks. I’ve already restored a Centipede cabaret, which you can check out here, so I know what to expect. No plans to keep both, so I expect to move this on at some point, once I’ve given it a light restore and tidy up. More on the progress with that in future posts.

See you next week.
Tony