The trackball as a method of user interface control has been around for some time. In terms of public consciousness, I would argue that arcade games pioneered their widespread use by getting them literally in the hands of a mainstream consumer audience. The best way to get someone using a new device, is to put one in their hands – as daft as that sounds, it’s perfectly true.

Up until the late 70s, trackballs had mainly military or industrial uses. A desktop mouse is essentially an upturned trackball, using what is fundamentally the same hardware – but although we take the humble PC mouse for granted now, we didn’t really see mass implementation and use of even those devices until what, the late to mid 90s?

Trackballs go way back to the very early days of arcade machines and beyond.

Like many of the world’s great inventions, the trackball as a concept was invented by a British engineer, Ralph Benjamin. Kept as a military secret for a few years, it was only fully implemented as a usable device by the Canadian navy some years later in its Digital Automated Tracking and Radar system (DATAR).

The DATAR was a method of giving all ships within a particular fleet a “single view” of their operational status by collating information provided by sensors placed on board of each vessel. The trackball could be used by operators of the system to manage and upload this data to the main DATAR mainframe for processing and regurgitation back to each ship. The actual hardware used to display this information was adapted from a radar screen.

Nicknamed a “rollerball” back then, the trackball device actually used a standard Canadian five-pin bowling ball, mounted on several air rollers. A disk was mounted on each roller, which were hooked up with electrical contacts. As each disc spun in relation to the movement of the ball, “clicks” could be measured.

The trackball evolved from here, and some time later, the basic electrical contacts were replaced with LEDs that shone through slots cut into the wheels – this provided more accurate directional readings from users’ hand movements, and, of relevance to us here on this blog, also allowed for more accurate detection of speed in any direction. So we now had a device that could not only sense direction, but also the pace at which the user of the trackball was manoeuvring the ball.

What the world ended up with is a device that acts as a very early analogue controller – much like the early PC mouse, or first Nintendo 64 controller, or more recent PlayStation and Xbox pads. Simply put, the device gave users complete freedom of movement across an imagined flat X/Y plane, with the ability to control speed of movement with a high degree of accuracy compared to standard joysticks.

The heady days of early arcade game development gave the trackball an opportunity to shine once more. Despite not being the first arcade game to use one (that accolade goes to a Taito game a year earlier), Atari’s Football released in 1978, is generally credited with putting the trackball into gamers’ consciousnesses. Being very physical to use, players found themselves breaking into a sweat after playing the game enthusiastically, compared to passively pushing a joystick or pressing a button. The trackball games (probably inadvertently) also gave users something of a workout with the addition of latency powered by the physical hand movements. Atari fashioned its monster 4.5″ trackball out of aluminium to withstand the inevitable battering the device would take out in the wilds of the world’s arcade floors:

To keep the purists happy here, I should point out that Atari made a point of trademarking its version of the trackball as a Trak Ball, as referenced in all its arcade schematics and manuals. I have no idea why, other than to perhaps differentiate itself and maintain its status as pioneer of all things arcade. (I’ll use “trackball” for the purposes of this article. I’ll only forget half way through if I try to be clever).

Talk about jumping on the new arcade bandwagon – everyone was at it.

It is no coincidence that 1980’s Missile Command had the trackball front and centre of its proposition and challenge, as its lead programmer Dave Theurer, had a hand in the development of the aforementioned Football. Once instructed to develop Missile Command, he clearly saw the potential that the freedom of movement the device would give him to play around with.

I wonder also if the hitherto military history of the device played a part in that decision. The original brief that Dave received from his boss Steve Calfee for Missile Command, made reference to players looking into a radar screen. Early documents suggest that the screen would mimic a real radar display with a sweeping line showing the missiles fading in and out. In an internal memo from Dave Theurer back to Steve Calfee dated 30th May 1979, where he describes his overall vision for the game, he mentions this:

The color monitor will display a radar scan view of the coast and the offensive and defensive missile action. [Missiles] will appear as a blip on the monitor as the radar beam scans over them. A cursor will be displayed on the screen and guided by the trackball.

Given that trackballs were now by this point widely used in military applications, their proposed use in the game would clearly add another layer of immersion to the gameplay, which placed the player as the sole defender of the coastal cities against a never ending nuclear missile attack. Incidentally, the “radar” idea was dropped after it was felt it would interfere too much with the player’s ability to follow the action on screen.

It is hard to imagine Missile Command without the trackball, and I say that without any bias (you might have gathered that I am somewhat of a fan). If you’ve tried to play the game on a console or MAME system you’ll understand what I mean. Missile Command requires split second movements, and the ability to control the speed at which you move the missile-aiming crosshair. Moving it from place to place cannot be effectively done with traditional digital control methods, where speed is delivered in singular, or stepped amounts – it just doesn’t work. The trackball adds a more human and therefore random interface with the game.

And uniquely, the trackball adds a whole new challenge to the package. One of the reasons why many players find the game difficult, is because of this piece of hardware. Here was an arcade game where not only did the game itself have to be overcome in terms of its programmed gameplay challenges, but players also had to understand and process the uniqueness of the trackball, and how it fit in as part of the overall experience. Not only could the game kick your ass, but the complex control panel could as well.

For some, the trackball and three fire buttons needed to operate the game was off-putting. For others it made perfect sense, and was a whole challenge in itself to overcome.

Of course we would eventually see future Atari arcade titles using this input device. Centipede being the most obvious. More would follow, including Crystal Castles, Liberator, Millipede, Quantum and Marble Madness. In more recent years, golf games have implemented the trackball into their hardware set ups.

After Missile Command was released, Atari developed a smaller 2.5″ trackball to fit cocktail and cabaret style cabinets. Despite field test feedback from players to the contrary, Atari stuck with the 2.5″ trackball as de facto on all its Centipede cabinets. A surprising move when you consider that most players would be familiar with the weight and feel of the larger trackball on Missile Command. All future trackball games from Atari would favour the smaller ball. Perhaps cost was a factor here?

Of course it wasn’t just Atari that saw the trackball as a viable controller option. The most interesting use was for Konami’s Track & Field. Rarely seen in the wild, this was offered to operators as an add-on kit for the game released with the tradition 3 button setup that might be more familiar with. According to the manufacturer blurb after installing the new control panel with trackball: “Game is faster, reduces player fatigue, creates greater challenge, attracts more players, reduces location noise”. I guess the last one makes sense, but as for the other “benefits”? Not so sure: 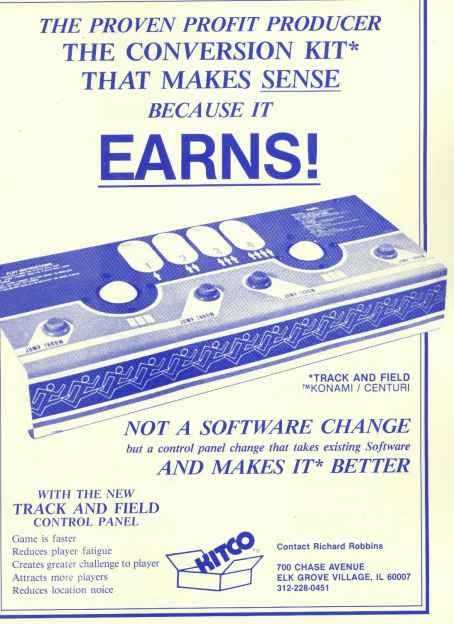 Interesting all the same. I’ve never seen a T&F with a trackball, but they are out there.

For its time, the trackball remains an amazing bit of kit. Broken down, it is actually a pretty simple device. The ball itself sits on two rollers at a right angle to cover the X and Y flat planes. These rollers house discs at each end with holes cut around their edges. An LED light shines through these sequential holes, creating a “blink” as it passes through. Sensors measures the speed of these on/off pulses, and feed the information onto the main PCB.

Over time, the rollers tend to wear with prolonged use as the ball wears the metal, but replacement bearings and shafts can be purchased. Other than a drop of 3 in 1 oil every 6 months, you should find your trackball needs little maintenance for a good decade or so.

Sadly, with the demise of Atari’s coin-op division, the arcade trackball became something of a curio, only to be used on a handful of subsequent games produced by other manufacturers. But it remains a fascinating piece of arcade history – its influence on future gaming interface devices cannot be underestimated. The wide range of 360 degree movement we enjoy today on our PS4s and Xbox Ones, owe a great deal of thanks to Atari’s pioneering use of the trackball as a control method for games.

Thanks for reading – do comment below if you have anything to add.

See you next week!