A rather grim arcade raid tale to share with you this week.

With a population in the hundreds, Idaho City is a small town that sits north west of Boise, Idaho. Like many smaller towns across America, it didn’t escape the influx of classic arcade machines during the Golden Age of arcade gaming.

Today, locals have been very aware of the town’s old hotel that had closed many years previously, and the shed located behind it. Collector Dave Jones walked past this shed every day, and became aware that it contained old arcade games. It appeared to be common knowledge among the townsfolk, but given its dilapidated state, Dave’s opinion was that there couldn’t be anything in there worth saving. The owner of the property who apparently suffered from ill-health had no desire to do anything with his buildings – even when the roof finally caved in.

Noticing the state of the shed, Dave decided enough was enough and he had to do something. As a collector, he felt it his duty to at least investigate what was there, and save what he could – these cabinets were suffering a long, slow demise. After making contact with the owner, it appeared his timing was good – there was a certain amount of pressure from the town for the property, now considered to be something of a hazard, to be cleared and made safe. After a brief discussion, it was agreed that Dave could remove whatever he was able to salvage from the wreckage. After persuading a collector friend to join him, he arrived at the site:

As Dave told me, when you’re presented with a scene like this:

Sometimes you just have to check your logic at the door and go for it, and that is exactly what we did. We figured that there could possibly be a few parts in there, but the amount of work involved might not make it such a good deal.

You can clearly make out from these pictures that the roof was totally collapsed onto the games. Both pinball and video classics were open to the elements. It was hard to see what might be salvageable at this point.

Looking through a hole to the side of the structure, a Vectorbeam Warrior and Midway SeaWolf appeared to be in OK shape: 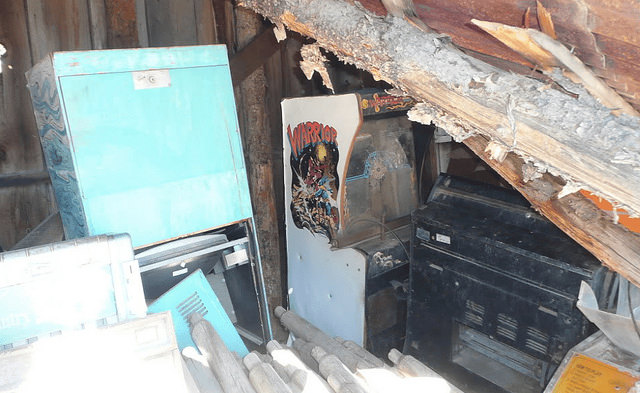 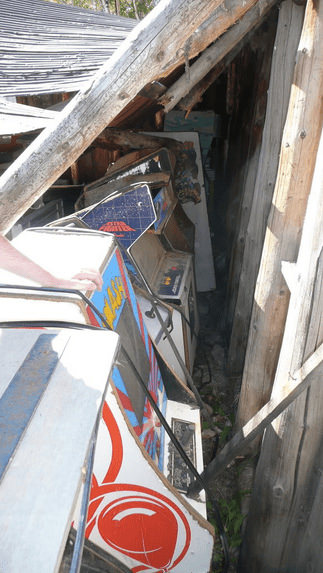 It was very fitting that where the roof had collapsed, the only thing actually holding it up was an Atari Hercules pinball machine! 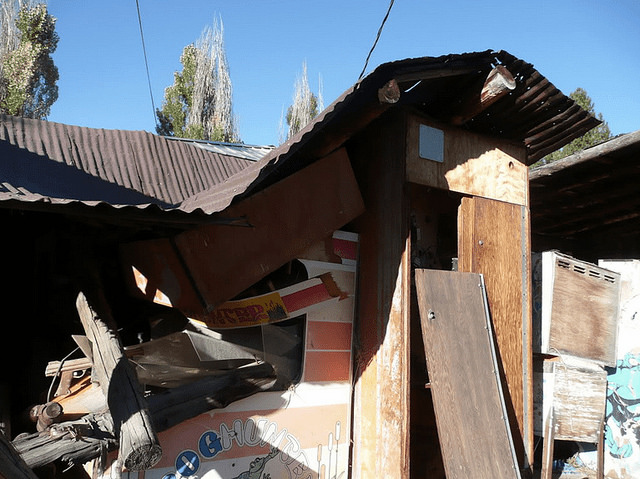 But it hadn’t managed to survive the weight. One of the beams had smashed into the coin door area: 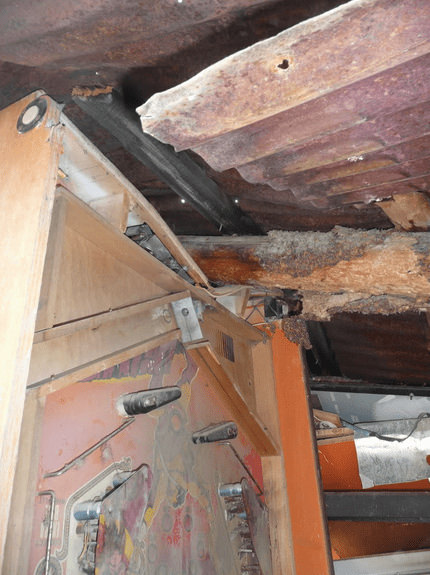 The machine revealed a long-deceased cat that Dave figured got itself trapped when the roof caved in. The only way to get the Hercules out was to saw away at a section of it to ease the pressure the roof was now placing upon it:

It was a pretty dangerous place to be, with a number of nails sticking out of the beams. A great deal of care had to be taken when moving around:

The back glass of the Hercules somehow survived: 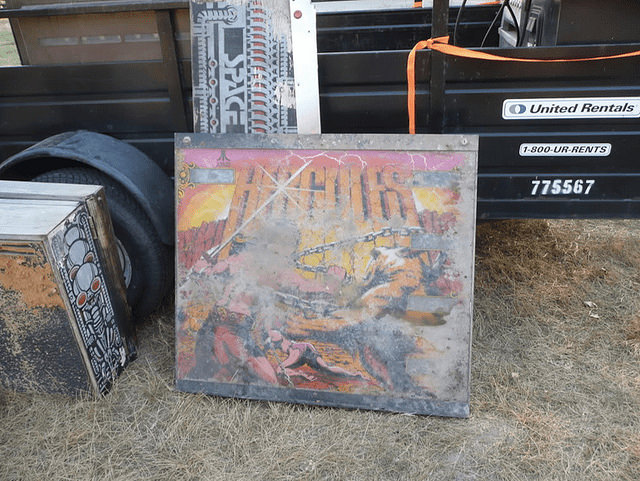 It dawned on Dave that these games had been exposed to the elements for over 15 years – and in reality, next to nothing could be saved. This was going to be a recovery mission for parts, rather than than a search and rescue of complete cabinets. And so, somewhat dejected, they continued to finish the job they’d agreed to do over the next couple of days.

The whole exercise seemed like a loss-leader, but whilst working, locals would pass by and express their gratitude that someone was finally clearing the eyesore. Someone mentioned to the guys that they thought there were more arcade games stored in a barn on the other side of town, related to this stash.

Once happy with their work, the pair set off in search of this mystery barn. After a few inquiries and asking for directions they arrived at the second location: 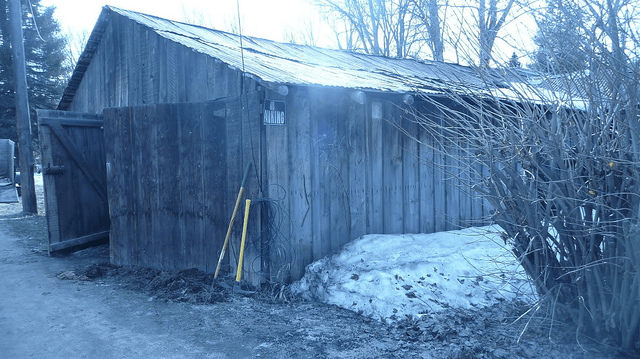 Well, at least the roof was still intact, if a little worse for wear. Inside was pitch black, and there was a good thick layer of mud at floor level. but shining a torch around, Dave made out some treasure deep inside the gloom:

A Galaxian. And next to it an Omega Race!

And behind that, a tired looking Robotron: 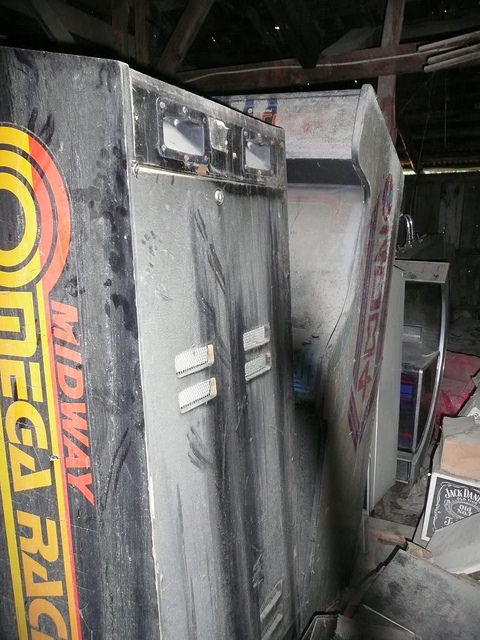 Everything looked pretty rough, but maybe there were parts that could be salvaged, or maybe the machines themselves could be restored. All were stuck in mud and took some effort to release them. All showed signs of rot to their bases.

In another corner of the barn, a Tutankham sat covered in dust. It did have a tarpaulin over it, so appeared to be in slightly better shape than the other three: 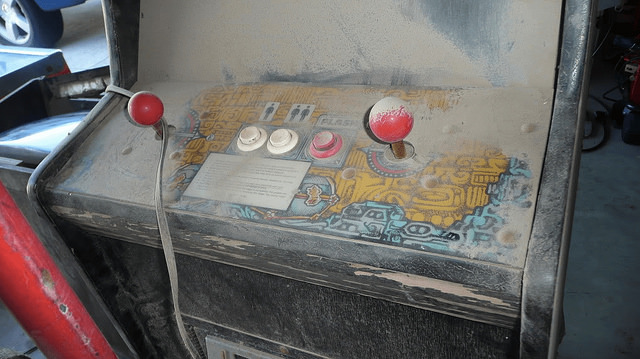 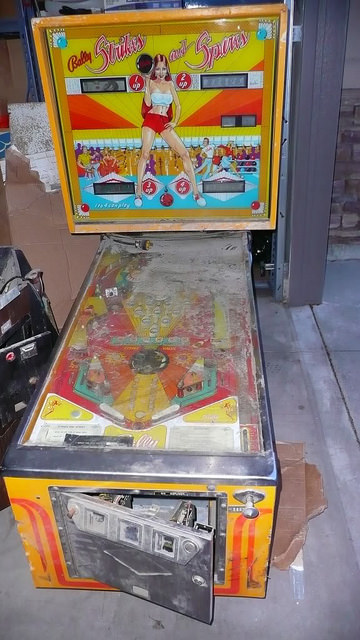 And up on an elevated section was a rare Gunfight cocktail table. unusual cab this:

After a lot of lifting and dragging things out, the games were loaded up and taken away:

After examining the games back home, sadly the Omega Race was just too far gone. It was completely rotted out and smelt like death. Stripped for parts, the main cabinet just had to be scrapped: 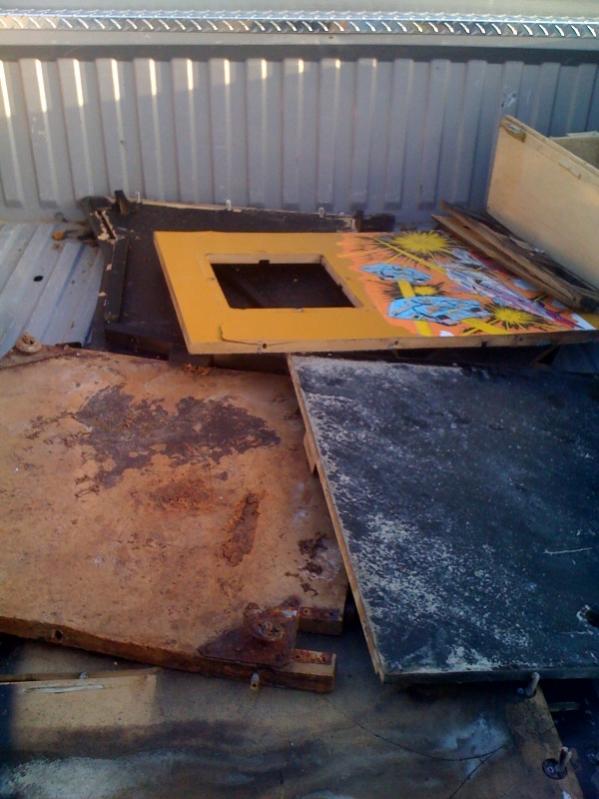 The pinball cleaned up OK but had many issues that would need addressing: 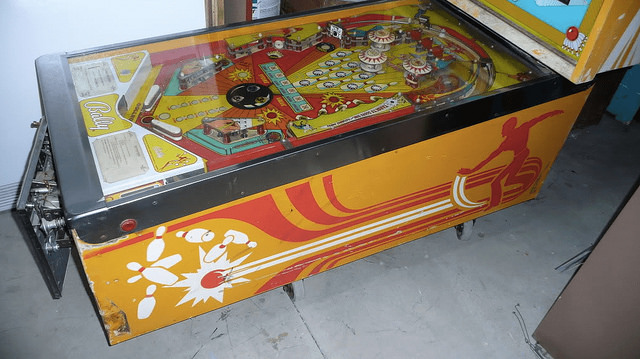 The Gunfight also cleaned up well, and appeared to have survived its barn ordeal pretty well:

So some interesting games all in all. Looking back on the experience, Dave is reflective about the haul:

I am just thankful that the games didn’t all go straight to the landfill without any of it being saved. It is all a little bittersweet. As much as I hate to see machines parted out, after 15 years of being exposed to the weather only a few of the complete games were saved. I hope the previous owner found some comfort knowing that we salvaged what we could, and realised it was time to let these machines go.

So there you go; a tale a two halves really, and a salutary tale of what happens to badly stored arcade classics!

Many thanks to arcade restorer Dave Jones for allowing me to retell the tale here on Arcade Blogger.