The arrival of the video game phenomenon across America’s arcades in the early 80s, hit society like a steam train. Communities across the nation were concerned about arcades becoming dens of iniquities, and many adults struggled to understand the appeal of this new fangled form of electronic entertainment that was sucking so much time (and coins) from the teenage population.

In Boston, officials described arcade video games as an “electronic blight” on the city. With a population at the time of just under 600,000, the city hosted an estimated 4-5,000 arcade cabinets. In 1982, state legislators decided to no longer licence machines placed in residential areas, only those in commercial or industrial locations. This local news report explains the concerns of local officials and how the industry was planning to take the fight to the city:

Atari, the darlings of the arcade industry at the time, took these threats to their business very seriously. In a move designed to communicate the positive side of video games, Atari went on an all out PR assault.

In March of 1982, they launched their “Community Awareness Program”. After months of preparation, interviewing and collecting data, Atari introduced the program, designed to combat what they described as the “ever increasing restrictive video game legislation cropping up across the nation”.  The program included a 17 minute video tape and a positioning paper, both designed to present a positive public perspective of the coin-operated video game industry. Local meetings would be set up by distributors, and the film would be shown, with a round table discussion afterwards, to local community leaders, concerned parents and local residents. 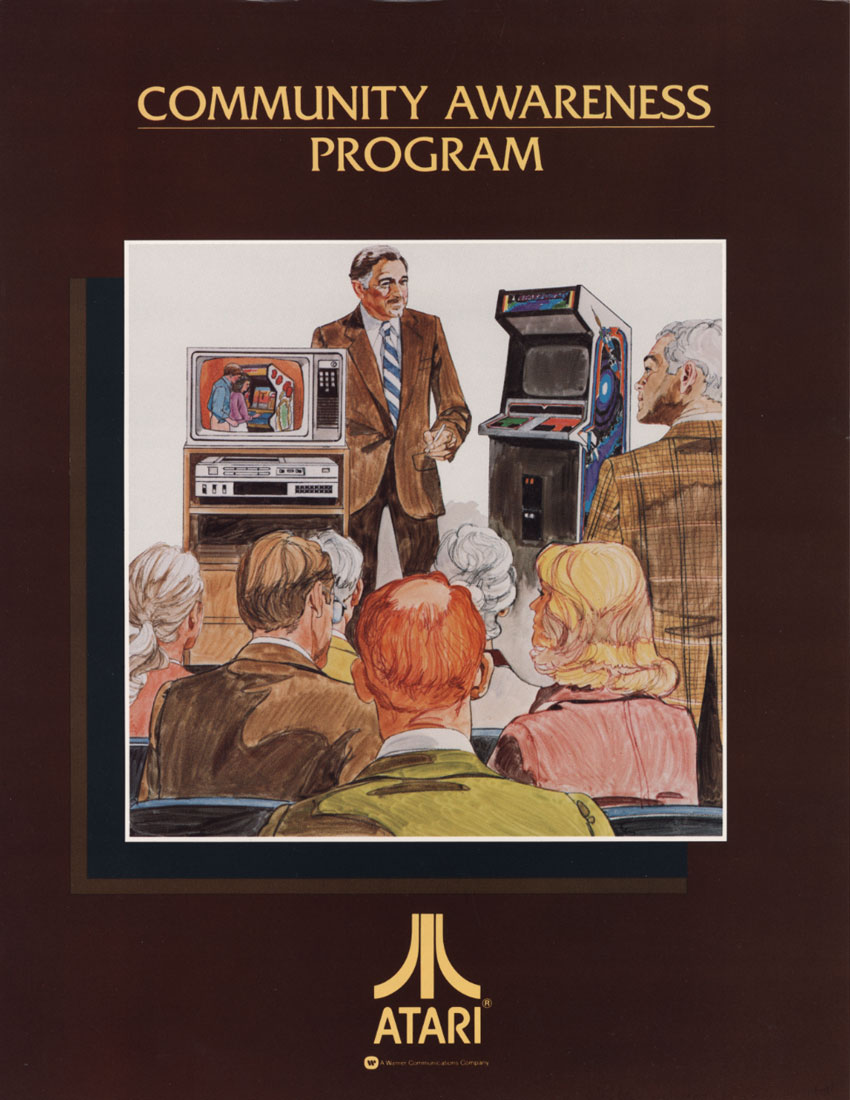 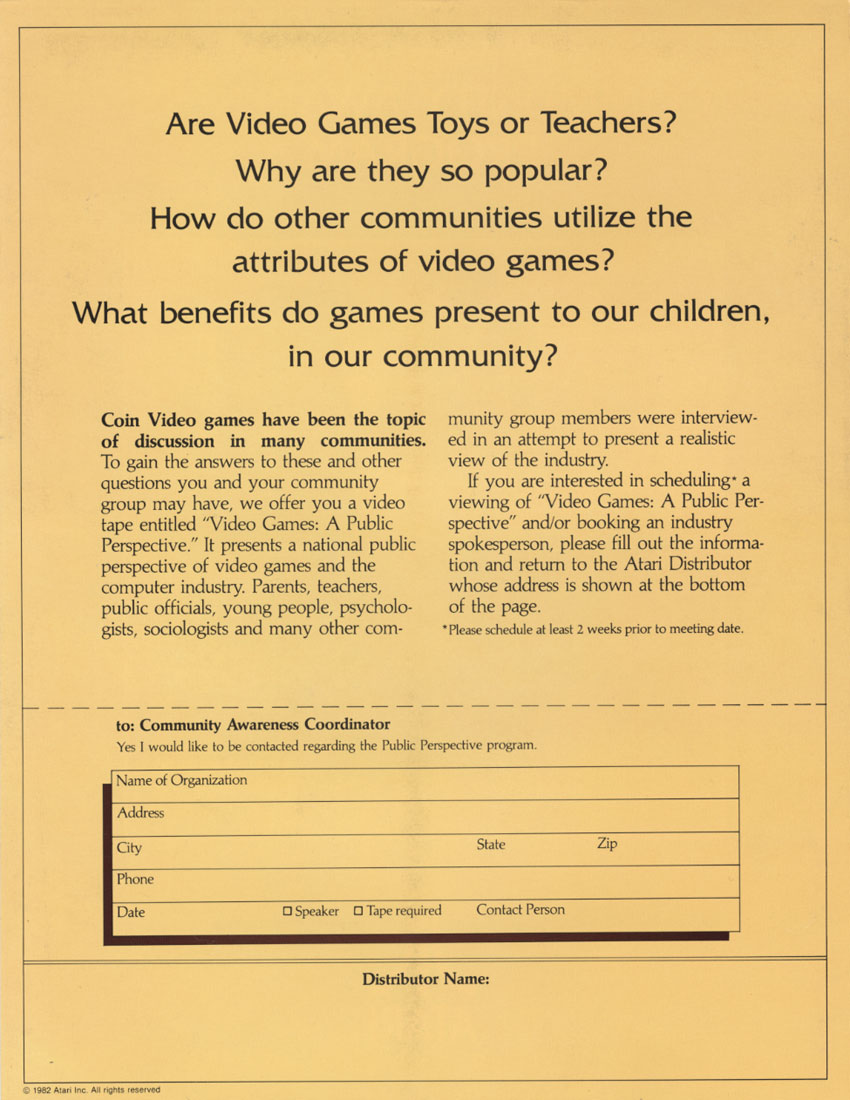 You can download and read the full position paper here. (Opens as a PDF)

At its launch, Don Osborne, Vice-President of the Coin Operated Division at Atari described the intent of the program:

As responsible business people, it is our obligation to educate our communities about our industry. The video tape and position paper will afford our communities a look at the positive attributes of our industry, as well as offering solutions that we can all live with.

The film shown at these meetings is quite interesting. Some cool internal shots of arcades are shown. Atari rolled out its big guns to discuss matters on film. Don Osborne himself gives an impassioned account of the benefits of video games. Programmers Owen Rubin and Dona Bailey also make an appearance. The actual video is here:

In their communications with distributors, Atari were a little more forthright about the matter:

The negative publicity regarding coin operated video games results from citizens’ need to blame someone other than themselves as the cause of negative social behavior by youth. Since young people are responsible for making their own choices as to what they do during their leisure time and how they spend their pocket money, adults view coin operated video games as a poor use of time and money. 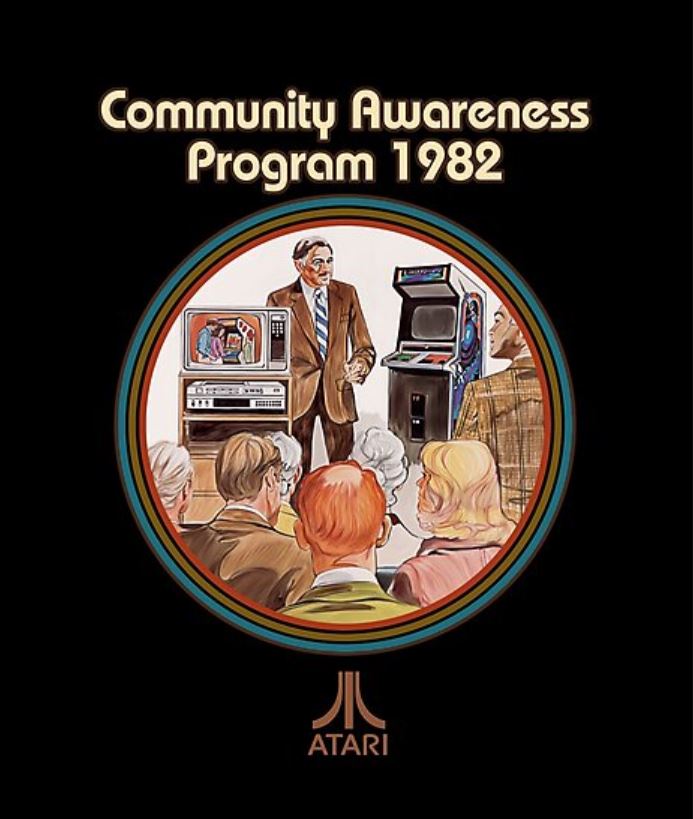 There are no records of the success or otherwise of these efforts by Atari to quell the baying masses; and arguably the events of 1984 when the arcade industry crashed spectacularly, organically reduced the number of arcades and machines across America anyway. But it’s an interesting insight into how seriously they took these threats to their arcade business activities. I hope you enjoyed the insight!