In the 70s and 80s, the notion of “sex sells” had a lot of traction from what I can remember. It seemed that the lowest common denominator of advertising was to stick a scantily clad young lady in front of a product, photograph it, and it would fly off the shelf. Jeans, aftershave, cars, you name it, were all heavily vamped up with lurid images of pseudo-porn innuendo, designed to part money from Alpha Male’s pocket. Some were more subtle than others, but there are some great examples if you look around. Arcade machines it seems, at least when it was a fledgling industry, was not immune to similar marketing tactics. Seen as a thing that young men did back then, it seemed obvious to add a little female spice to the adverts. However, an objective look back at this time reveals rather mixed results.

The game that started it all was Computer Space. Its a good place to start as it was the first widely distributed video game cabinet. Released in 1971 by Nutting Associates, it was clearly felt that a bit of glamour was required to sell the game. So the arcade videogame industry, straight out of the blocks, used female models to create desire.

With retrospect, and being of its time, I guess this works. The seductive curves of the cabinet fit the context of the picture well.

And so it was to be with future releases of classic arcade games. But sadly unlike the example above, it seems there was little sophistication to be found. Never mind screen shots, or videos of the games actually being played, or how immersive the graphics were – how about just photographing the female form draped across, or god forbid, actually playing the machine? That would work. Right?

Er. Maybe not. Compare and contrast. No offence if that’s anyone’s mum, but rolling out Marcy from accounts to “sex up” the Quantum arcade machine, wasn’t Atari’s smartest marketing move in my opinion. Coincidentally or not, the game never saw a major release. Hindsight is a wonderful thing. (By the way, if anyone wants to sell me a Quantum cab, I’m all ears).

Not that I want to be a rampant pervert or anything (I’m going to have to write something for Christ’s sake, so bear with me people), but in my objective opinion, it could be argued that the marketeers did a better job here with Centipede: 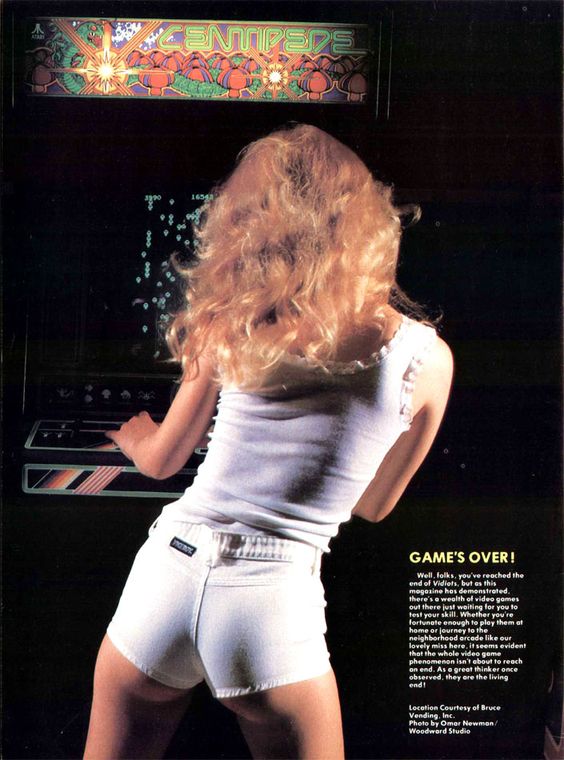 You’ve got the 80’s hair, Daisy Duke hot pants, a bit of rear cheek. What’s not to like? Although isn’t it interesting that the game is in almost total darkness; it is clearly not meant to be the focus of the picture.

That said, a more traditional approach to the same game was taken here:

Although I’m not sure about her ability to maintain that stance for more than 5 minutes, and we’ll skip over the fact that the machine isn’t actually plugged in. These pictures come from an interesting article from 1982 on “Women In Arcades” which you can read here.

But of course it is generally accepted that women were drawn to certain games like Namco’s Pacman and Atari’s Centipede arcade games (indeed we should note that Centipede itself was actually programmed and designed largely by, Dona Bailey). Here’s Kate Pierson of the B52’s playing a Centipede cab back in the day:

A lot of Atari’s promotional ads depicted excited couples playing arcade games together. Perhaps a subtle message that games weren’t just the new playthings of young males, to be feared by grown ups, but something to be enjoyed by everyone. One senses an attempt at a ‘demystification’ of these early arcade machines. By way of example, check out these promo pictures of Asteroids Deluxe, Dig Dug, Space Duel, Tempest, Gravitar and Millipede: 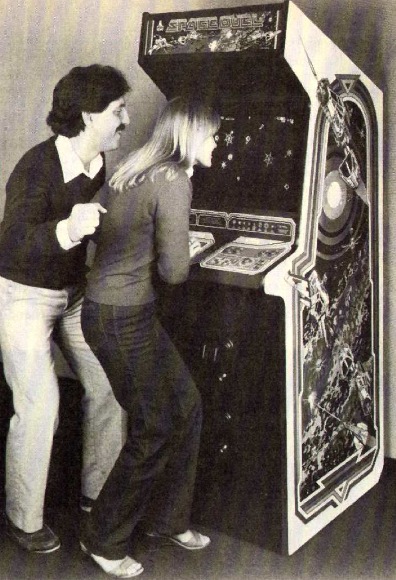 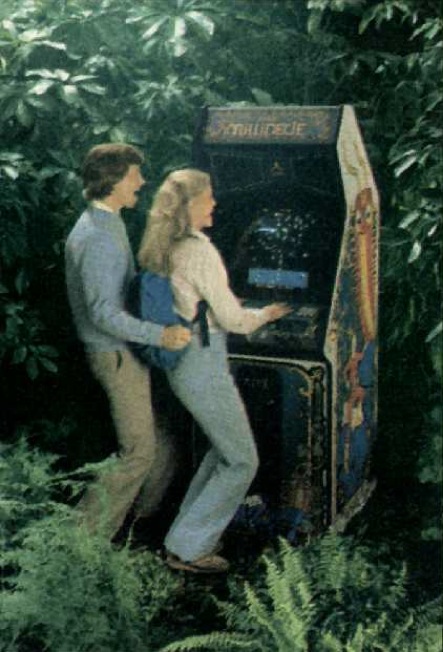 Fun for all the family, so long as you’re wearing flared slacks. Notice it is the woman at the controls in every shot, with the male playing the role of the back seat driver, which was unexpected given the rampant misogyny of the 70s and 80s.

Track back a few more years to one of Atari’s early games, Gotcha. A similar format was used. Legend has it that this picture got them into hot water, due to its dark undertones. Um, it’s only a bloke chasing after a woman…

But then you realise that the game was released with boob-shaped controllers incorporated into the cabinet, naively meant to make the game more feminine, and then you start putting two and two together. What is ostensibly a simple “catch up” game, could be seen as something slightly more sinister – the marketing wrapped around a game with limited gameplay, designed to shock an audience perhaps? (Atari dropped the boobs in later releases of the game for a more traditional dual joystick affair you’ll be pleased to hear) 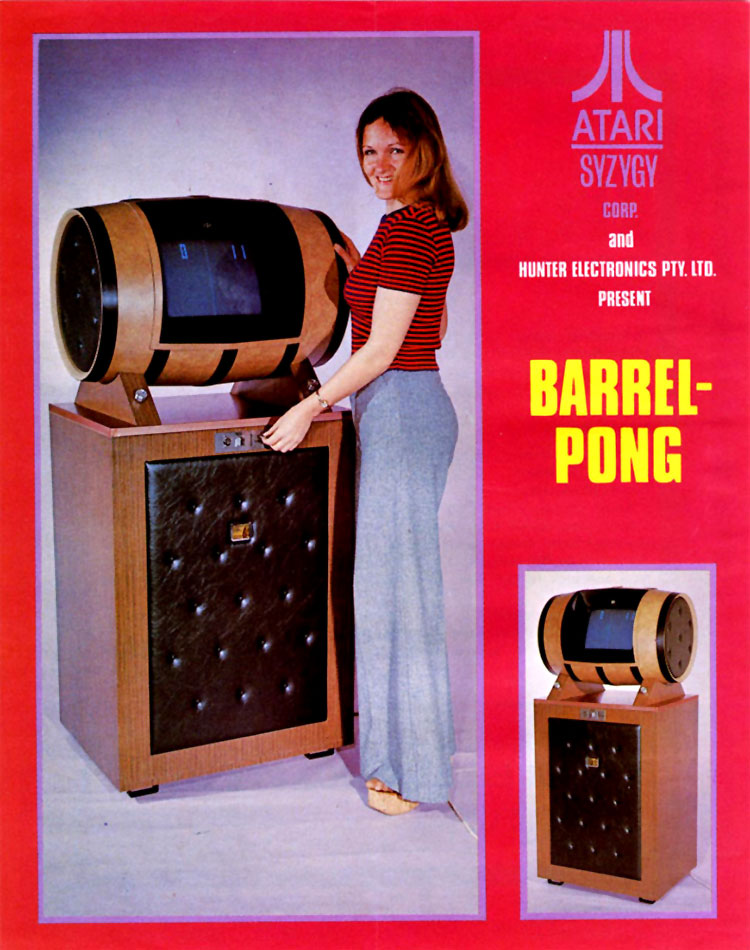 (Same girl in both pics above) 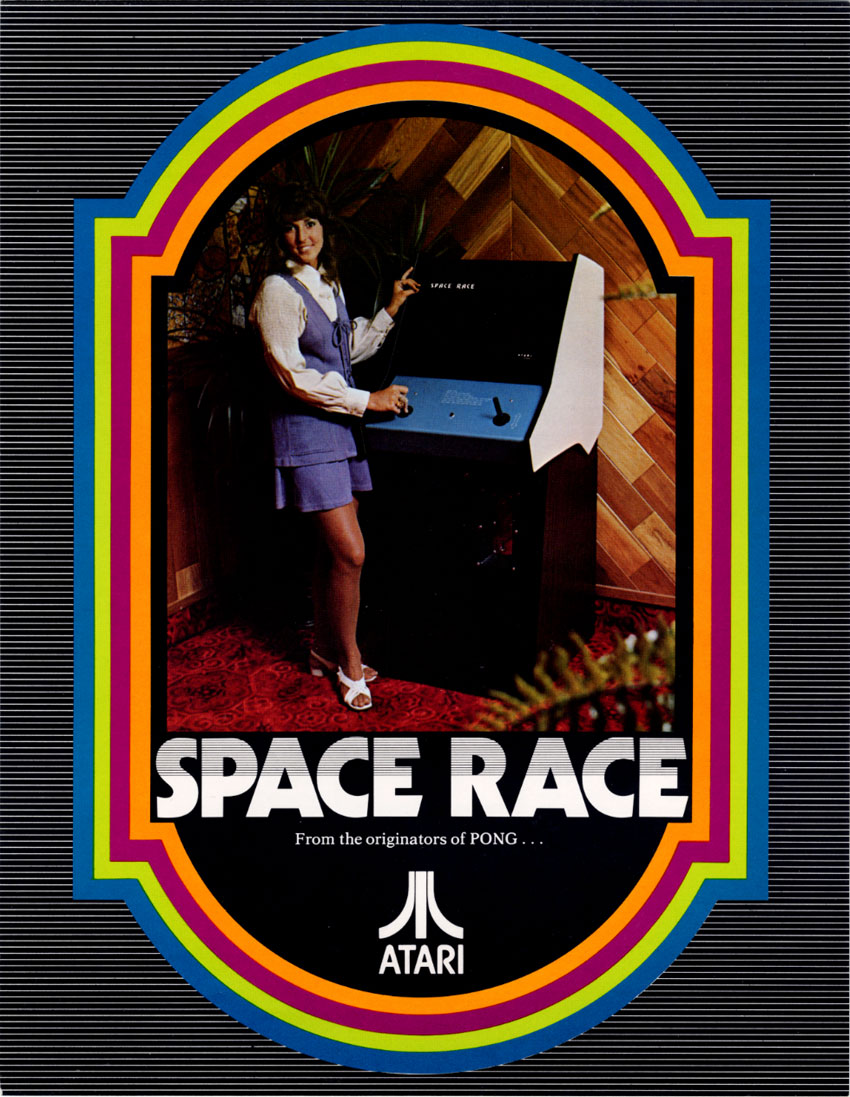 Some fine 70s fashion going on there. Following Atari’s lead, Sega/Gremlin got in on the act too with its Fonz, Astro Fighter and Head On arcade games released during the same era:

Twins or early Photoshop? I guess we’ll never know. But those flowers add a touch of class to the proceedings I think.

Sega Japan weren’t immune either, with both its Monaco GP games receiving similar treatment, along with Space Odyssey: 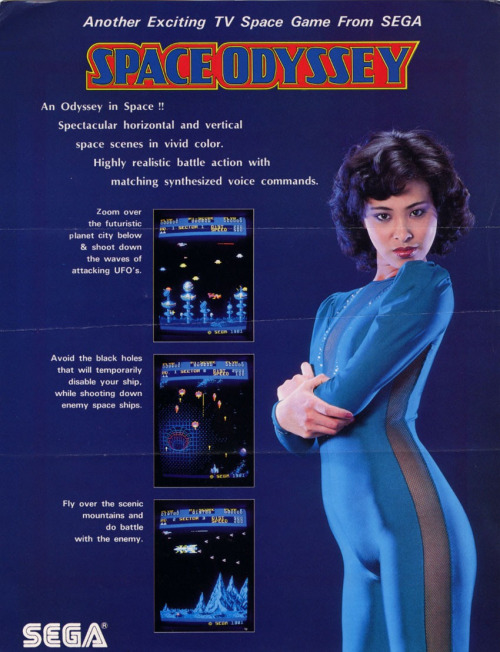 Williams Electronics? Guilty as hell. Here’s Defender showing its wares with this publicity release from 1981: 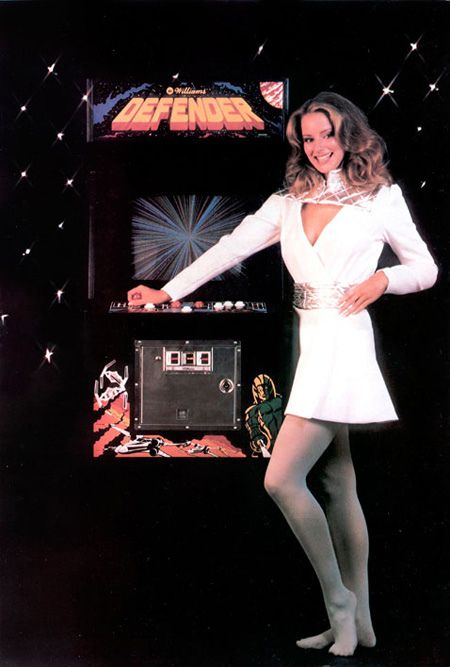 All looks good until you see the model is wearing no shoes. I mean come on… An interesting side note here, the graphics stencilled onto the cab depict Star Wars imagery, which was hastily changed after legal threats from 20th Century Fox. However, a handful of these pre-production cabs did make it out into the wild from early trade shows before the actual release, and one or two are in the hands of collectors today.

Game Plan had a crack at the genre with Shark Attack in 1981:

Bikini? check. Snorkel and flippers? Check. Jaws undertones and a woman in peril? And a “bottom” gag for the men? Yeah, that’ll work! Game Plan Inc sunk without trace shortly after this game was released. 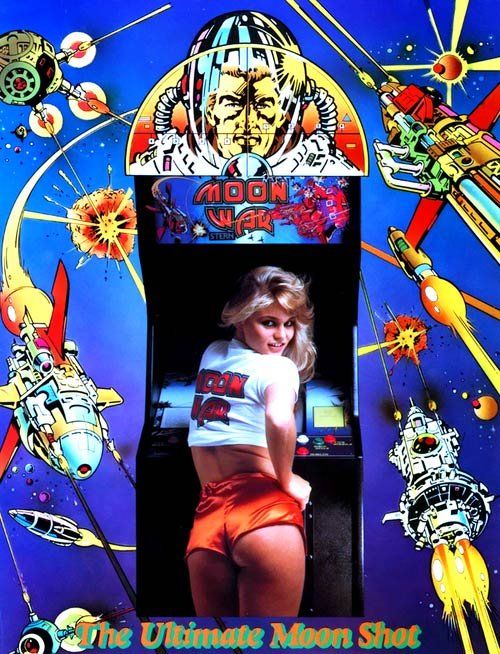 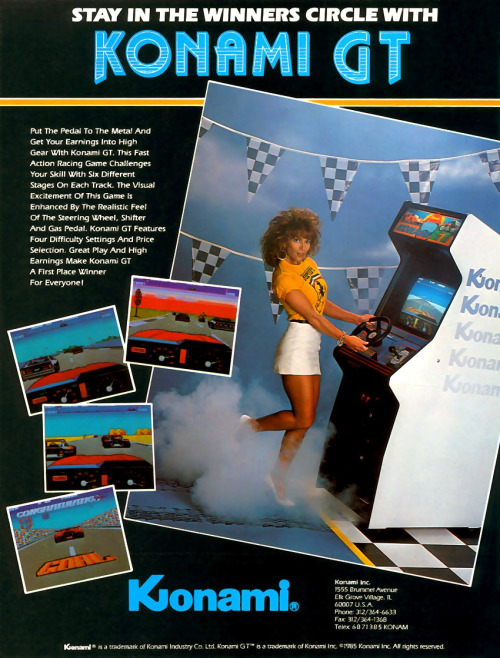 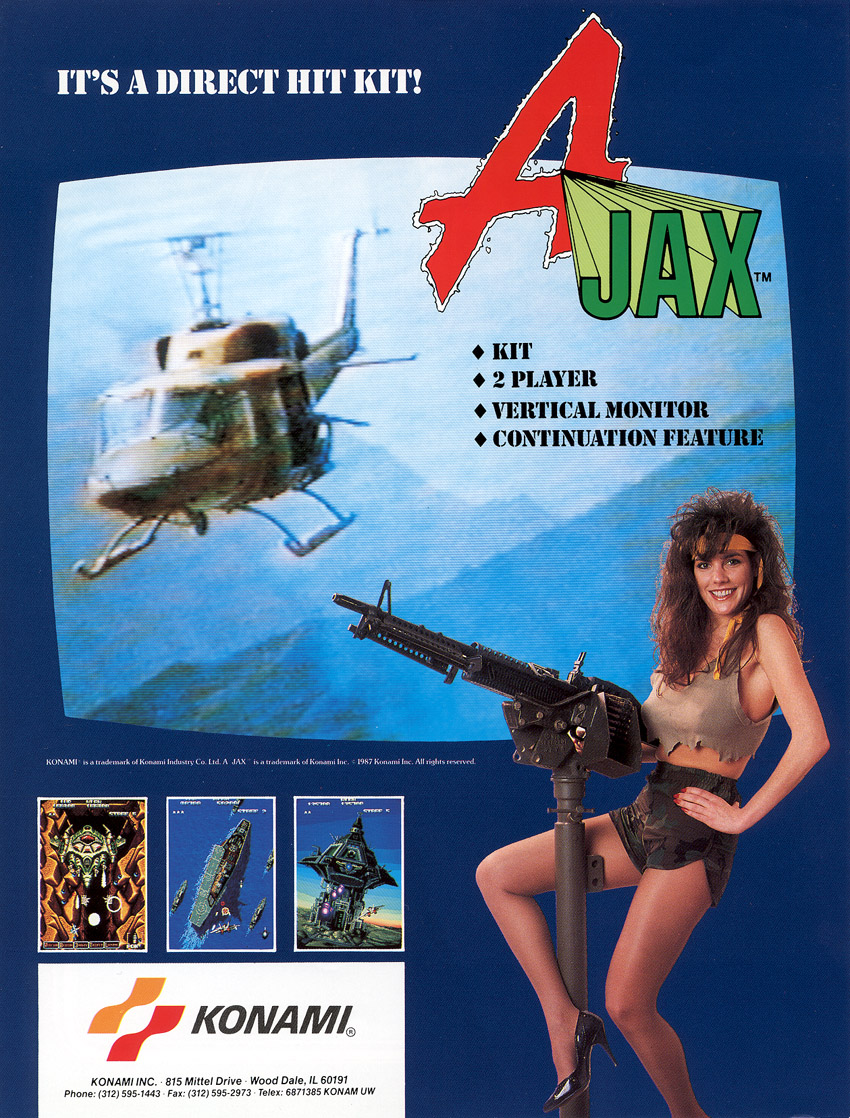 I’ll leave you with this picture, which I think just about gets it right. I have no idea if it’s an official publicity shot or not. I give you Midway’s iconic Pacman:

Finally. A picture where they get the shoes right.

There are many more examples of this phenomenon. I may do a follow up in a few weeks. Props to The Arcade Flyer Archive where most of these great flyers are hosted.

Do give my blog a follow by putting your email address in below!