It’s hard to put a figure on the number of classic arcade machines that are still around. As you will have read on this blog, those cabinets not in the safe hands of restorers and collectors today, are likely to have met a grim fate at some point. When machines came to the end of their useful life (when they stopped taking money) they were either smashed up and destroyed, or converted into something else by enterprising operators, often with cataclysmic results. That said, there are still discoveries made that astound the community. Old warehouses and barns occasionally reveal hidden gems, and those cabinets that can be saved and restored, are rescued and restored back to their former glory.

But there is another category of classic arcade machines that’s rarely seen: those that have been abandoned. Arguably these cabs meet an even worse fate – left to rot in long forgotten buildings. If they are found at all, it is usually too late. What the following pictures reveal is not so much the twisted beauty of a cab that’s slowly disintegrating, exposed to the elements and untouched for many years, but they give clues to the story behind them. Why were these cabinets there? Why were they abandoned? Who played them? Did their owners make a hasty departure from the properties housing them? Or were the doors closed and they were simply forgot about?

Here, an old deserted cafe in Arizona house three long forgotten arcade cabinets. Photographed as they were found are a Sega Zaxxon, Atari Star Wars and Exidy Bandido, each slowly decaying into dust: 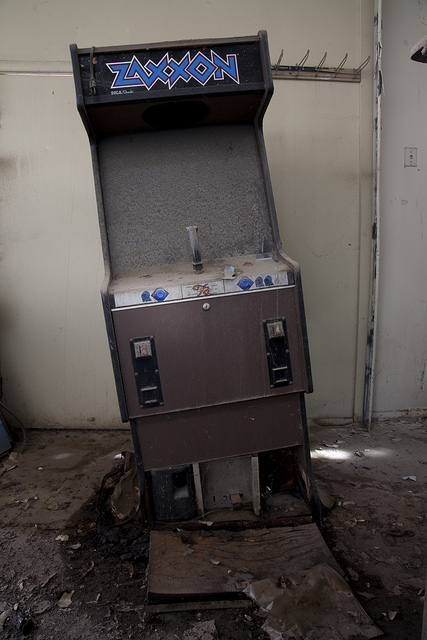 The Star Wars at first glance looks salvageable, but check the base.. 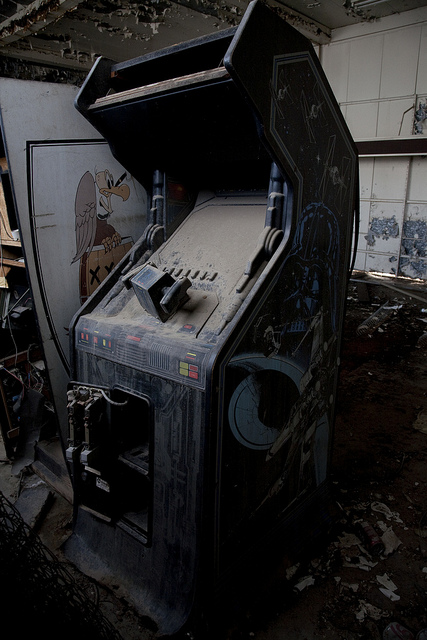 You can see it’s started to rot, but the rest will be good for valuable parts as donors to another stripped cab.

Here, you can see the way the Star Wars and Bandido are slowly decaying. Both are gradually leaning backwards as the bottoms rot out.

Those pictures were taken in 2011. One can imagine how long these machines have been left given their state. Do check out the rest in the series via the link at the foot of this page.

An impressive showcase of decay in this picture of an abandoned Williams Make Trax machine. Recently discovered at long shut down Chanute Air Force Base in Rantoul, Illinois. The setting seems very appropriate:

Perhaps the machine was in the officers’ mess as a distraction for hard worked airmen?

Spreepark Berlin was a very popular amusement park in Central Europe. It was acquired by the owners after German reunification – up to that point it was the only theme park in the German Democratic republic and was owned and run by the state. Despite a high of 1.5 million visitors a year in the 90s, it closed in 2001 after mounting debts. Further research reveals a cracking tale of intrigue behind the closure:

The Park, the only one of its kind in East Germany, was built as the Kulturpark Planterwald in 1969, sold to a private investor after the fall of communism in 1989 and renamed after the adjacent River Spree. However, it seems that no one checked new owner Norbert Witte’s background too carefully. In addition to running an alleged cocaine-smuggling ring out of the park, he drove Spreepark into financial insolvency and fled to Lima, Peru with six of the park’s most popular rides (his son still remains in prison for his involvement in the crimes). Spreepark has remained out of operation ever since, a rusting monument to eccentricity on the fringes of the city.

This gutted Sega Outrun exposed to the elements in one of the outbuildings gives a small glimpse of a happier past: 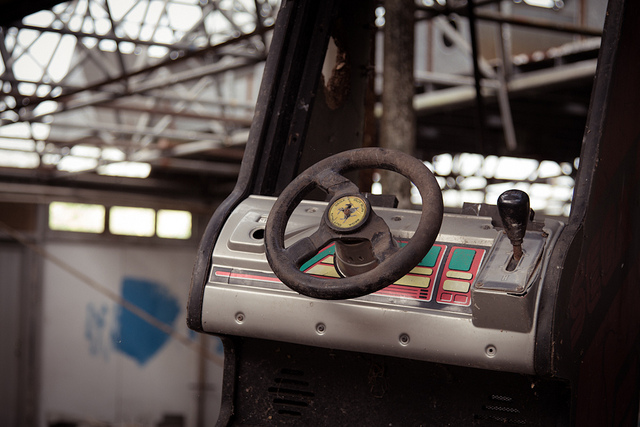 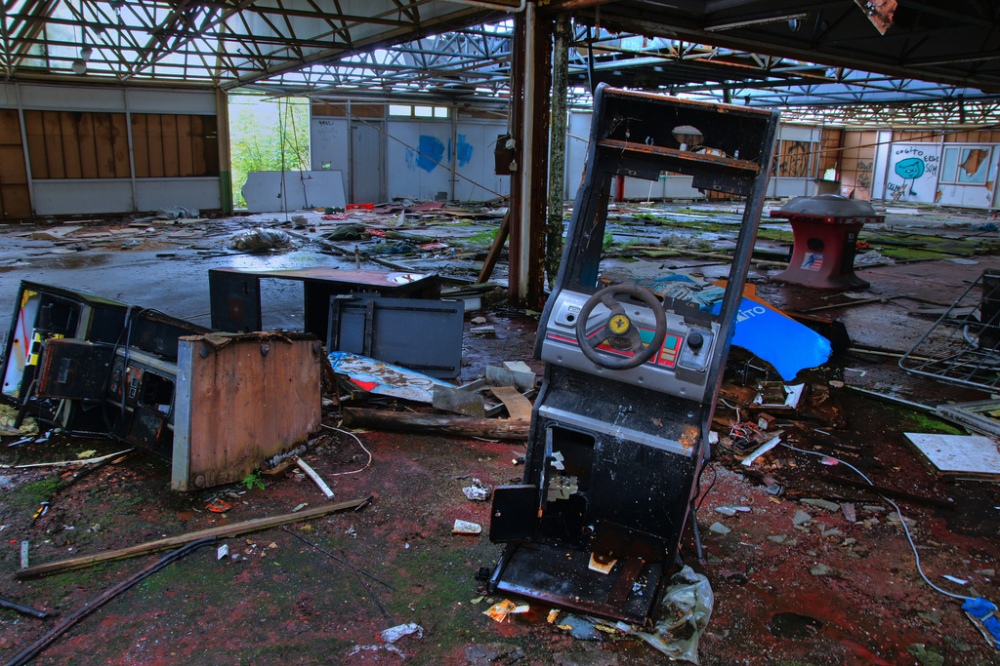 And these are now almost unidentifiable:

You can now take official tours around the abandoned park if you Google hard enough.

A similar fate was bestowed upon other parks. During its heyday, thousands of families would descend upon Wichita’s Joyland amusement park in Kansas Texas. Opened in 1949, it thrived until 2001, and had a brief reopening in 2003, only to close for a final time in 2006. Here is all that’s left of its arcade:

I can spot a Midway Seawolf and a stripped Atari Sprint 2, along with a handful of upturned cabinets to the left. You can view the full extent of this Chernobyl-like amusement park as it is now in this video.

An abandoned mental asylum is not a place you’d expect to find rotting arcade machines. But given their ubiquitousness back in the day, I suppose we shouldn’t be surprised. After a 65 year run, the Forest Haven asylum in Laurel, Maryland closed its doors for a final time in 1991, leaving behind a treasure trove of artefacts including these forlorn gems:

I spy a vandalised Universal Mr Do! and a face down Atari Millipede. For shame.

At least these two Atari cabs had a beautiful place to live out their final years:

Location unknown, but given the exposure to the elements, its hard to imagine they can be salvaged. Great picture though.

The following pictures were taken by one of those “urban exploration” types. Abandoned Steve is a photographer who runs his own website where he posts pictures of old decaying structures and their contents. These photos are from a series taken at an abandoned school cottage built during the 1900s, which closed for good in the mid 80s. Here we see a Data East Robocop, a Nichibutsu UFO Dangar, Arch Rivals, Tetris (once a Robotron!), Baby Pacman, AA Football and Eswat. They are literally melting where they stand, untouched from years of heat and humidity. These are both stunning and sad pictures: 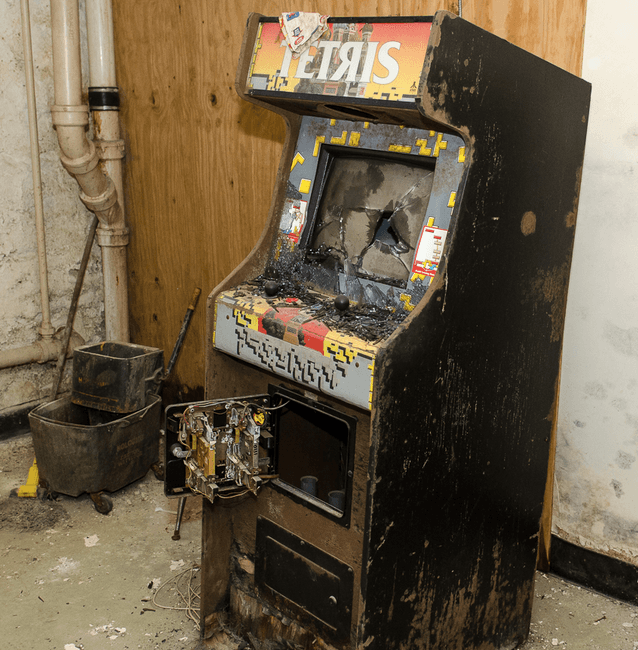 Make sure you check out the rest of the set on Steve’s site. (Link below)

To buck the trend, here’s a happier tale. The Duke of Lancaster was a dry docked ship converted to an amusement centre in North Wales here in the UK. The old car deck of the ship housed a classic arcade, rammed full of arcade machines. When it suddenly was forced to close in 1983, the cabinets were sealed inside its rusting tomb, until they were set free in 2012, some thirty years later, after a great deal of investigative work from a handful of collectors. I’ll detail this raid in full in a future article, but meantime here’s a few snaps of the raid: 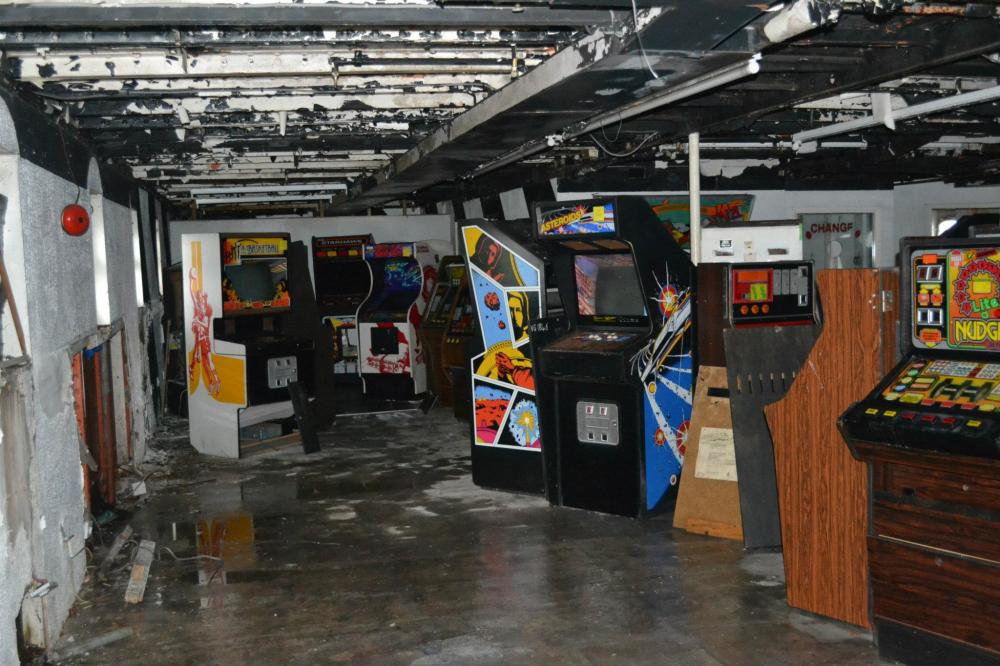 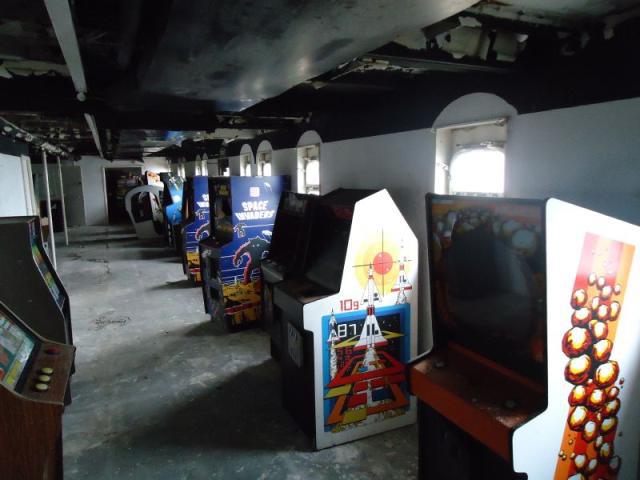 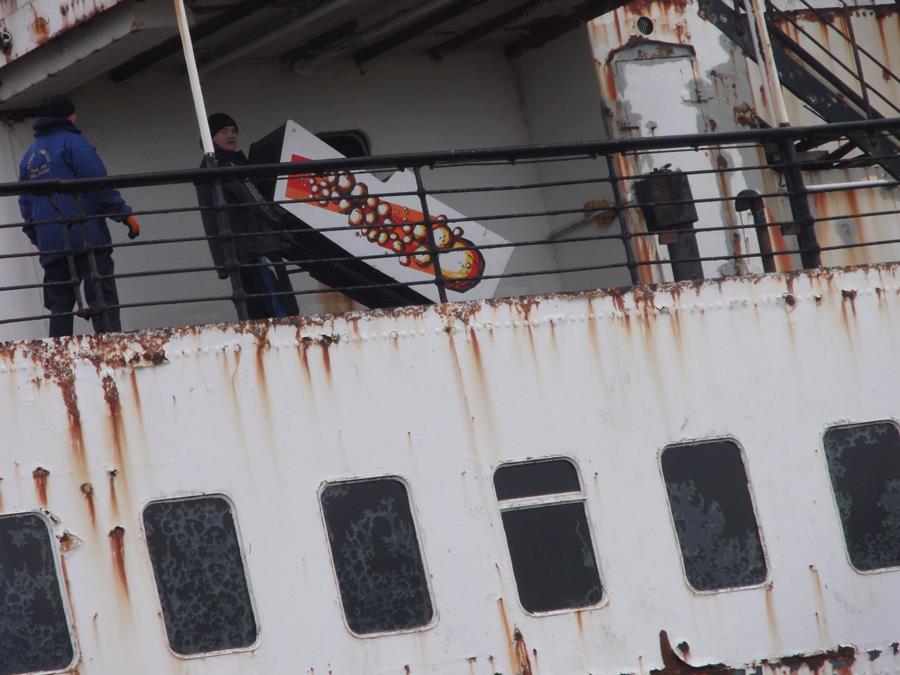 I’ve played a few of the many cabs that got rescued from the ship on that day, including a laughably bad (but fascinating and rare none the less) Missile Command bootleg by Sidam called Missile Storm. Thankfully they were all saved in the nick of time before they rotted away – many were on the verge of having to be destroyed due to water ingress on the ship. This was a truly impressive haul in every sense of the word – The Duke of Lancaster raid was nothing short of epic. I’ll write the story up soon.

The tale behind this picture is even more incredible and I intend going into it in depth in another blog post. But as a teaser, here is an incredibly rare Cinematronics Sundance machine discovered abandoned in a squalid run-down abandoned restaurant/bar in Nevada California:

Amazingly it was in almost perfect condition, turned to face the wall, sat in the hot, dry air of California for all those years. Again, more on this in a future article.

Two more here – no idea when or where these were taken:

A sad Taito cab and others were found in this disused warehouse:

The guy who discovered them could only salvage parts which is better than nothing. Do you think he actually chainsawed that Red Baron?!

These three Centipedes are too far gone sadly:

The combined effect of cycles of hot sun and rain showers have produced that onion peel effect on the side art.

Imagine wondering through the forest and coming across this place in a clearing:

Zoom in on the upper floor there, and there are some very old gems. Computer Space! 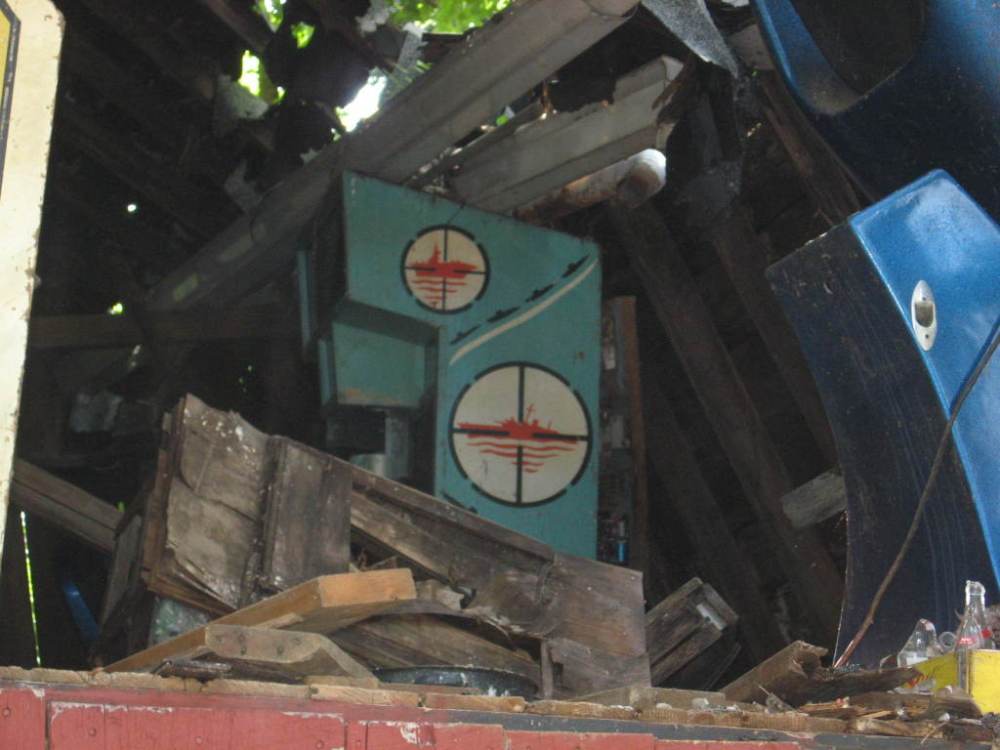 An abandoned Clubhouse in Detroit next. Clearly used to house various arcade machines. An upturned Space Invaders Part 2 and a Tempest hiding up there in the eaves: 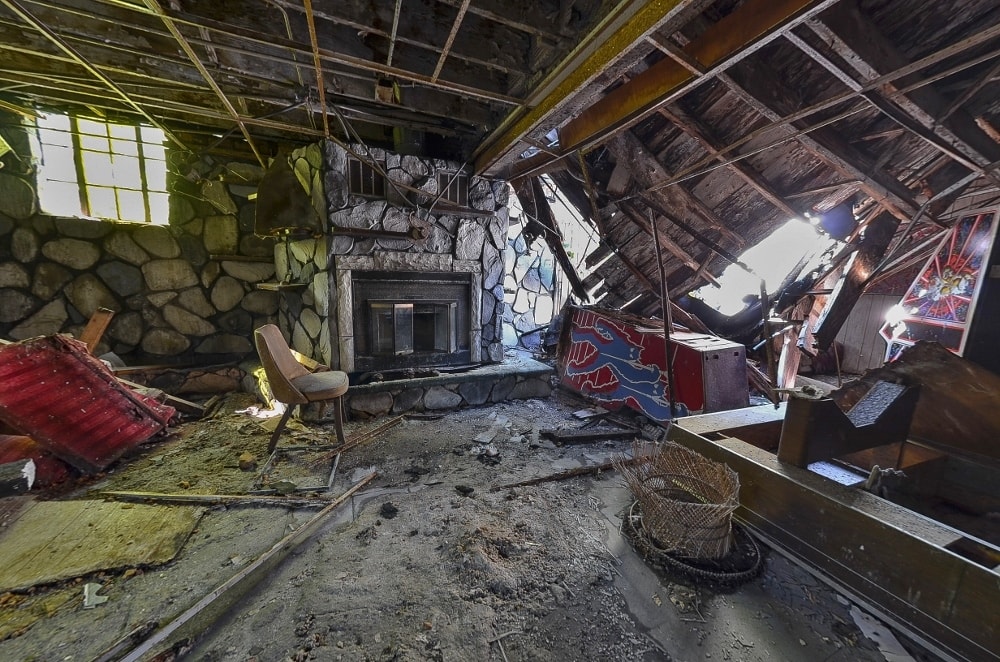 I’ll leave you with pictures of what must have been the most remote arcade on earth. Located on the little-known Japanese island of Hachijojima, this abandoned hotel (one of many to be found there apparently) once housed an arcade. The machines are still there. But only just: 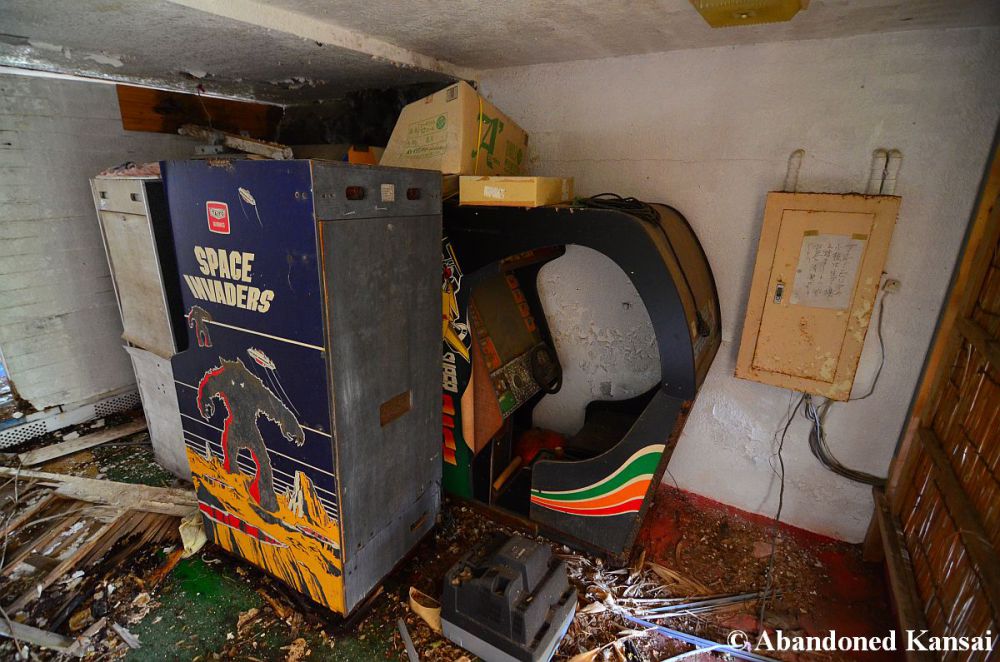 These Sega Astro City cabinets are far too new to be left surely? Mind you their fibreglass construction should hold up well to the elements. 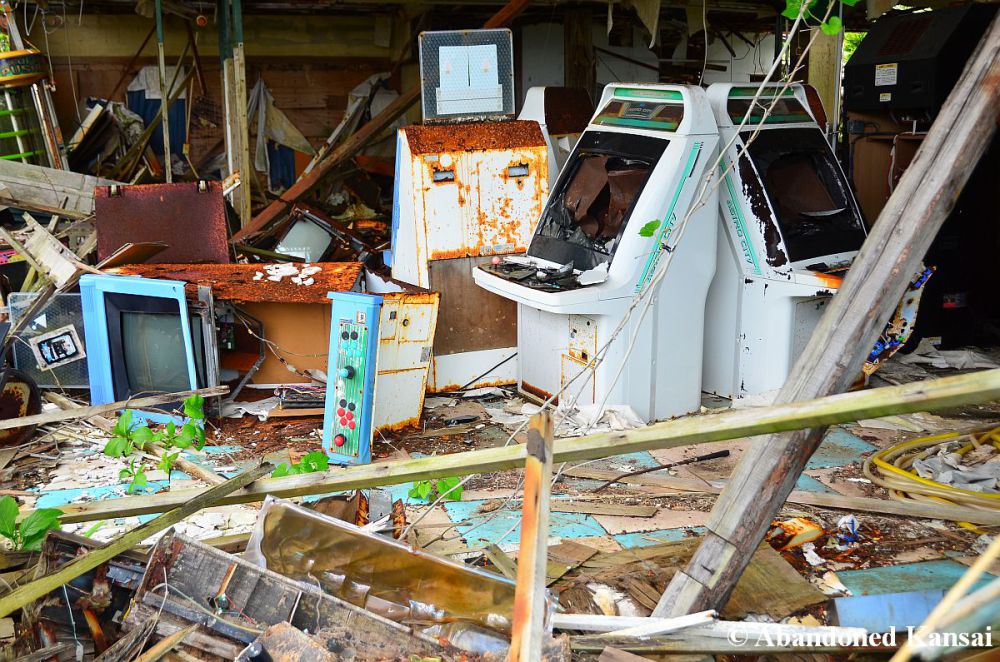 The place is truly now and arcade graveyard: 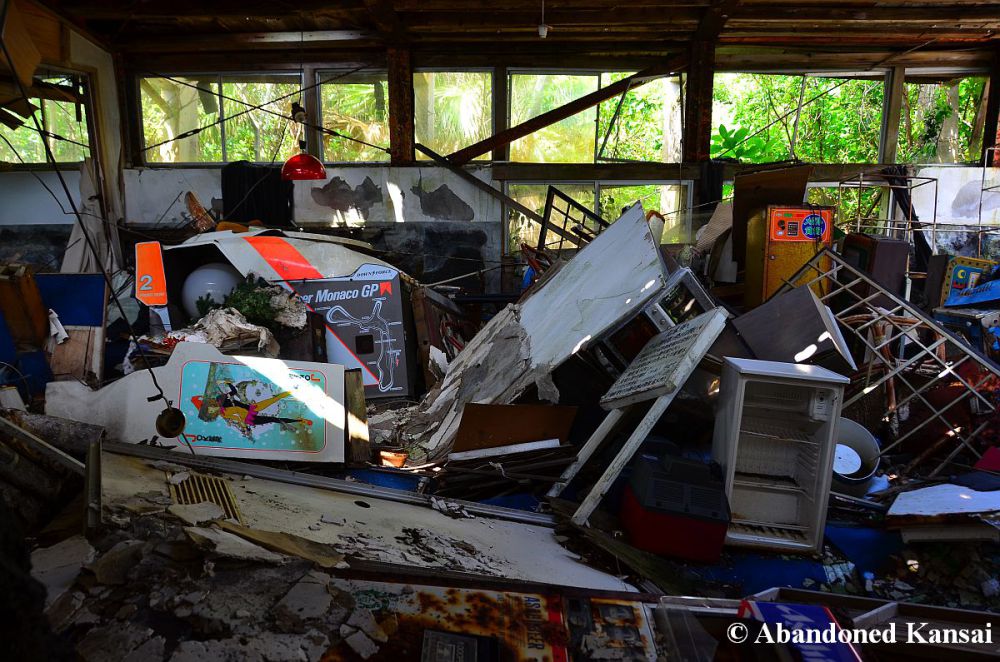 Thanks to Florian at Abandoned Kansai for allowing me to share these last four.

I remember eating a meal with Walter Day a few years back, and him telling me wistfully that one day in the not too distant future, all the arcade machines we enjoy today, will be nothing more than dust, and he’s probably right. For now, we need to preserve these mighty cabinets as part of modern history. When they do disappear, I guess there’s still MAME and other emulation.

But it won’t be the same…

Thanks for visiting – see you next week.

Disclaimer: this article was written in full on 25th March 2016.