This week, we take a look at some examples of what are known in the trade as “Conversions”.

The purists of the video arcade collecting community tend to collect dedicated cabs. These are totally original, unmolested arcade cabinets from the 70s and 80s. A level of restoration is expected in most cases, which may mean new artwork, PCB repair, replacement buttons and general repairs to rot, swelling and rust; but the key thing being that the cab isn’t changed at all from its original design and function. 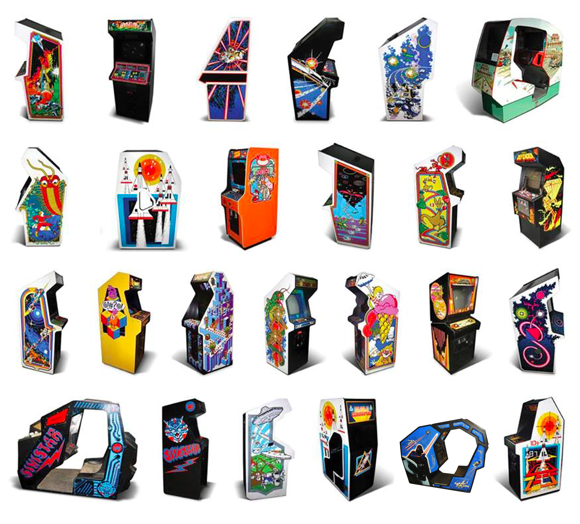 Aren’t they beautiful? But the 80s was a wasteful time. Hungry for the new found riches, the industry didn’t think much about what would happen to these large arcade cabinets once they’d outlived their shelf life and players moved on to the next hot game.

Manufacturers would build a cabinet, designed to house a single game – this would come with dedicated controls, bespoke artwork and of course a one game PCB. Thousands were spewed out to a ravenous global arcade market. Once the game was no longer taking money, the operators had two choices really – scrap it, or convert it to something else. The love you might see today from hobbyists wanting to preserve arcade machines from this important period of time wasn’t present back then.

Operators and arcade owners were businessmen, and the machines were workhorses with one purpose – to take money. Lots of it. There was no thought given to the fact that these machines might be highly collectable one day. Care and attention was a rare commodity – spit and polish was the order of the day. So what to do with an arcade cabinet that’s no longer bringing in the bucks? Simple: Roll the old girl out the back, tear out the redundant game and controls, bin those parts (now worthless – no one is playing, no one wants them), then slap another game board in the cabinet, add a new marquee, new controls, and wheel it back out to the arcade floor like nothing ever happened. (A quick lick of paint to cover the lovely artwork was optional). It was akin to quietly putting down a lame horse while no one was looking.

Of course, the other choice operators had was to place the original cabs into storage (what for, who knows?); and still to this day, stashes of cabs are found covered in dust in warehouses across the globe. Documented “warehouse raids” reveal time capsules of unmolested arcade cabinets ready for a new lease of life in the hands of arcade collectors and restorers. But I digress from the purpose of this article…

So anyway, here are some examples of the worst arcade conversions I’ve seen over the years. I apologise in advance for any upset caused.

First up, Super Pac-Man. Someone took upon themselves to convert this beauty:

A rather uninspiring Golden Axe. Not pretty at all, and a good example of the standard of care taken. But there’s more. Much more.

The Star Wars cockpit cabinet is arguably the most iconic of all 80s arcade machines. This beautiful cab is a holy grail for many collectors. Imagine seeing this: 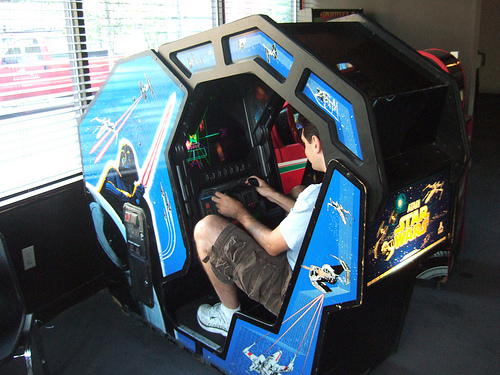 Converted to this monstrosity: 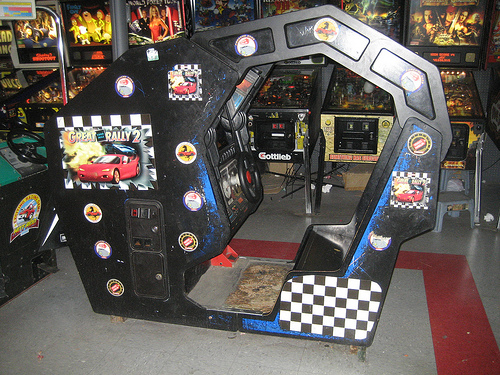 That’s an original Star Wars cockpit converted to a Great 1000 Rally 2 game by some chump. The artwork, vector monitor and yoke controller have all gone. Replaced with black paint, stickers, a raster monitor and a steering wheel. People have been jailed for lesser crimes. (You’ll be pleased to hear that this was converted back to its former glory as a Star Wars by the guy who discovered it back in 2010).

Quantum is a great game that never saw a wide release. You simply cannot find of these anywhere now, as only a handful exist out in the wild. But what the hell, lets destroy it and knock out an Arkanoid instead, by converting this: 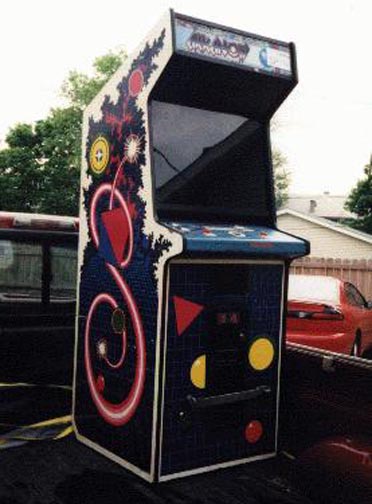 I could cry. Presumably the vector monitor was binned along with the marquee and control panel. But on the plus side, it’s still a Quantum at heart, and it has its original artwork.

You get the idea. We’re on a roll now. Take Atari’s Firefox. Rarer than a very rare thing indeed. 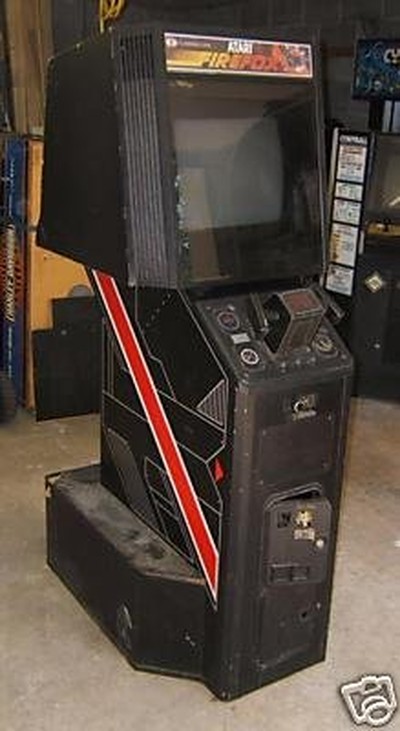 And after. A bloody Phoenix for god’s sake: 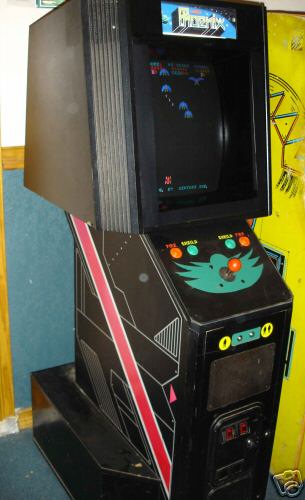 Now Firefox was always notoriously difficult to keep running, due to the heat produced by the laser disc player, but still, WHO DOES THAT?!

Atari’s Tempest. Truly criminal this one. What would possess someone to do this?

What it should be is a thing of beauty, just like this fine example:

A shadow of its former self – a bastardised Neo Geo cabinet. Only the shape tells what it once was. They even carefully painted over the side art.

Or if you want more options, you could always add some handle bars, and make a Sega Hang On. Hey, why not?

I am now stabbing at the keys on my laptop.

And here’s one close to my heart. Missile Command. Released in 1980, it is a beautiful cabinet in its native form:

And here it is with its soul ripped out for a game like 1989’s Arch Rivals:

or how about a Tetris?

Or better still, a Tumble Pop?

For the love of god. We should find those people responsible and have them up for crimes of some sort.

A few more for you. Joust Cocktail? That’s a rare one. Unique, quirky and highly collectable:

But clearly not sacred enough to avoid a shoddy Alien vs Predator conversion: 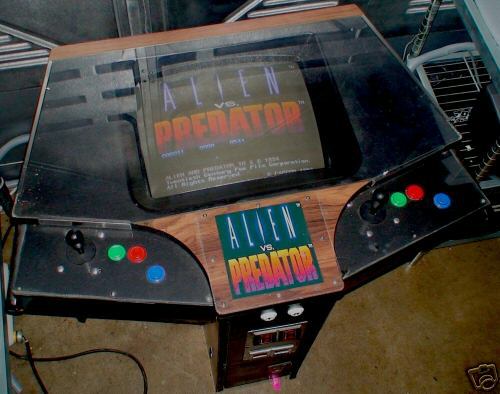 Star Wars again. This time an upright cab. Highly desirable and one of the most valuable of classic arcade machines. Let’s take this:

And do this to it. Yeah that’s a great idea. Much better: 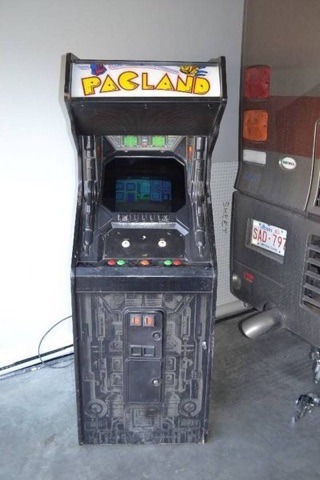 Tron. Another iconic beauty. Original on the left, nasty “Multicade” conversion on the right:

And this one is just, well, downright outrageous. The iconic Computer Space. I think we can all agree it is a thing of real beauty in it’s original state:

Never mind it was the first arcade game to get a widespread release all the way back in 1971. Never mind it is the Penny Black of arcade machines. Go on, I dare you to convert it to a bootleg Pacman cabinet:

There is a special place in hell for the person(s) who thought that this was a good idea.

I leave you with what is perhaps the most infamous of all arcade conversions. Ladies and gentlemen, I give you the legendary Star Wars Arcade cabinet chair:

The phone handset is a nice touch as is the plush button faux leather seat. This conversion has been the stuff of legends oft debated in many arcade collector forum threads over the years. Truly comedic and horrific at the same time.

The good news with all of these bad conversions, is that they are all salvageable. A mainstay of many a collector, is the ability to covert back these machines to their former glory as icons of the 70s and 80s. The paint can be stripped to reveal the original artwork. New joysticks, trackballs and yokes can be sourced, and new PCBs can be found and repaired. And this is probably one of the main motivators for getting into the hobby – huge satisfaction can be had from restoring back an original cab that’s been butchered in some way.

So rather than being crestfallen when discovering one of these monstrosities, a collector sees opportunity. And that is the essence of this hobby; what something can become. These butchered cabs are actually an opportunity to save another piece of history.

Many thanks to the various collector forums around the web where I sourced most of these pictures from, and especially BrentRadio’s Hellcade website. I highly recommend you head over there to see more horrible conversions (not for those with a weak disposition).

You have been warned.