It was the summer of 1952, and Bob Lawton had a plan. Armed with a loan of $750 from his grandmother and some savvy business sense, he along with his brother, built a 35c per play indoor golf center on the second floor of a 6,000 sq ft property in the heart of Weirs Beach, New Hampshire. As a key holiday destination for Americans of the region for many years, this small town sitting on the shores of Lake Winnipesaukee was (and still is) a magnet throughout the summer months for families looking for things to do with their vacation time – and Bob knew there was a way to capitalise on that demand. By the end of their first summer, the brothers had generated income of $2,900; quite a sum of money for the early fifties.

Some ten years passed, and the Lawtons were able to run the business successfully during the summer seasons that came and went. Bob realised at the time that Weirs Beach itself was getting more crowded as the years went by, and parking especially was an issue. He thought the earnings potential of the area was always going to be limited by the 400 parking spaces provided by the city. When the parking spaces were full, families drove on by – and one assumes, spent their money elsewhere.

With little action being taken by the local City of Laconia, Bob decided to take matters into his own hands, and quickly purchased a 19 acre wooded plot just up the hill from Wiers Beach. He cleared an area within the 19 acres right on the road, built ample space for car parking, and quickly built a new, outdoor mini-golf course.

It was now August 1964, and Funspot as we know it now was born. Incredibly, you can still play the same golf installation if you visit today.

The mayor of Laconia cuts the ribbon at the grand opening of Funspot, August 1964.

As Funspot’s footprint grew through the years, Bob was on the ball enough to keep up with what was trending at any particular time. The amusement industry was and is a fickle one – fads came and went, and customers were always looking for the next big thing. Identifying and selecting the right equipment was an exact science – choose wrong, and you’d end up with a White Elephant that took up space and burnt money. Pinball, Pool Tables, Candlestick Bowling and outdoor attractions all made an appearance at some point within the Funspot property. Some continued successfully, others were shut down and replaced – everything was monitored closely for profitability.

But it was the appearance of videogames in the mid-late 70s that opened up a new massive revenue stream – one that drove consumers to spend quarters rather than dimes at a time. Around 1976, the first three videogames to be placed on the floor were Atari’s Tank, Midway’s Sea Wolf and Atari’s Indy 4. The latter two averaged $90 and $140 every day during their first Funspot summer season – way above any other amusement machines’ earnings to date. With this sudden unexpected spike in revenue, Bob quickly realised the direction his business had to go in.

The video game era had arrived, and quickly took over Funspot’s floor space. Pool tables were removed and replaced with banks of video games, and by 1986 a whole new building was designed and constructed to house what is now known as The Largest Arcade In The World.

A fact almost unique to Funspot is that the majority of video games found within the property, have been there from new; they have been ‘on location’ at the same location for over 30 years – an incredible feat considering the videogame industry fell off a cliff during the 80s. Even those original Sea Wolf and Indy 4 machines are still on the floor and still going strong.

So how does it survive today? In 1998, Gary Vincent, long time employee of Funspot (what started as a three-week job filling in for the summer of 1981 hasn’t finished yet) came up with the idea of making the arcade not for profit and recognised as a museum. Finding it more difficult to justify the video arcade’s existence within the property, Bob loved the idea, and soon the business was registered as such:

The American Classic Arcade Museum, Inc., a 501c3 non-profit corporation registered with the State of New Hampshire, has been established to promote and preserve the history of coin-operated arcade games.

Now known as The American Classic Arcade Museum, ACAM houses over 300 original classic arcade games all under one roof. It’s an impressive sight.

Walking up the stairs into the red hue of the main video game room for the first time is something you don’t forget – and repeating it each year never gets old. I’ve make the journey to Funspot every year since 2006 year with friends, and the hairs still stand up on the back of my neck as the cacophony of the 80s music soundtrack coming over the PA, myriads of CRT screens, digital bleeps and bloops coming from each far off corner of the room and brightly lit arcade marquees, all drown one’s senses at once: 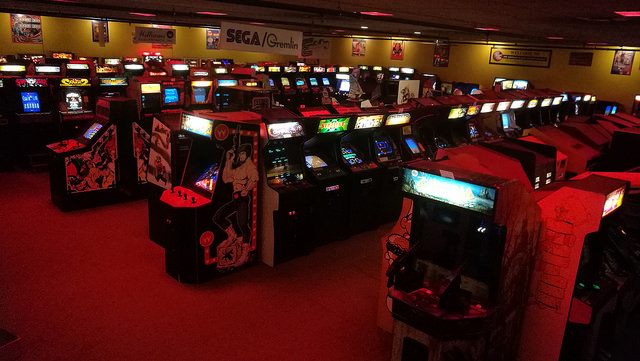 And that glorious sweet musty smell of 300+ machines sitting in attract mode pulling you in to play – its hard to describe – “warm wood” is the best I can do – there is simply nothing like it. 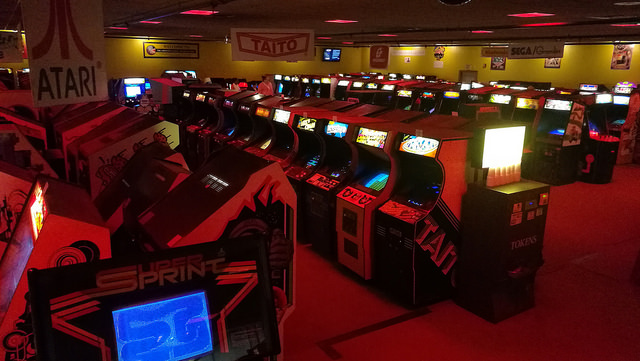 For me, walking into Funspot is akin to walking right back to 1981 – the atmosphere hits you from the moment you step inside, and it takes a moment or two for it to all sink in. “Is this place real?”. It’s a time capsule.

This year’s trip was my 10th visit to ACAM, and I’d say it was the best one yet. The work I put into writing this blog since starting it earlier this year always uncovers new things that I didn’t know about classic arcade games. I was especially keen to try out several new machines, and identify features in others that I hadn’t spotted before. But honestly, faced with such a plethora of titles all under one roof, where do you start?!

Hopefully the pictures which I’m sharing here taken earlier this month will give you an idea of the scale of the place, and demonstrate why (classic arcade fan or not) you simply have to make the Funspot pilgrimage at least once!

The room is made up of row upon row of arcade machines from the mid 70s to mid 80s. name a game off the top of your head, any game, and you’ll find it in this room.

Where possible they are sorted by manufacturer:

The Universal line up. Including Zero Hour, Galaxy Wars and Cosmic Alien: 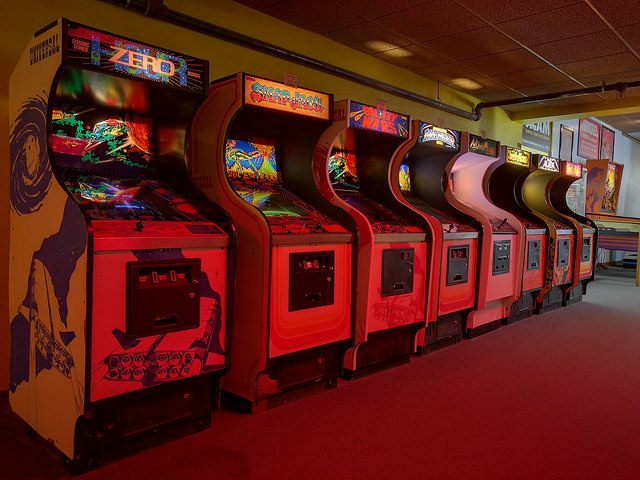 Here’s a rare sight, a row of Atari vectors. All working! 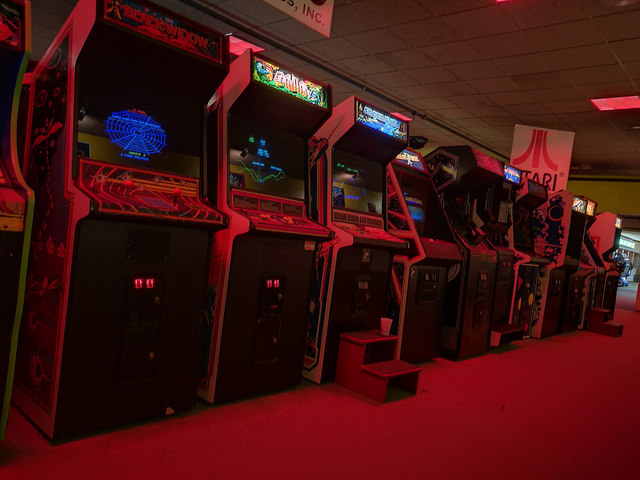 Taito games. Unusual to see any of these alone, let alone alongside other titles by the same manufacturer: 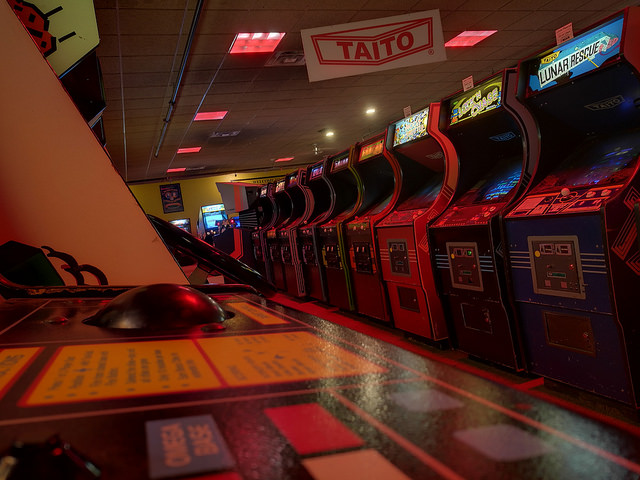 There are plenty of rarities and unusual cabs within the space. This Space Harrier Deluxe is one of the nicest I’ve ever seen:

A Glorious Mappy cabinet with that famous oversized marquee. Love the artwork on these:

One of the first triple screen cabinets, a sit down Atari TX-1. Can’t be many of these around: 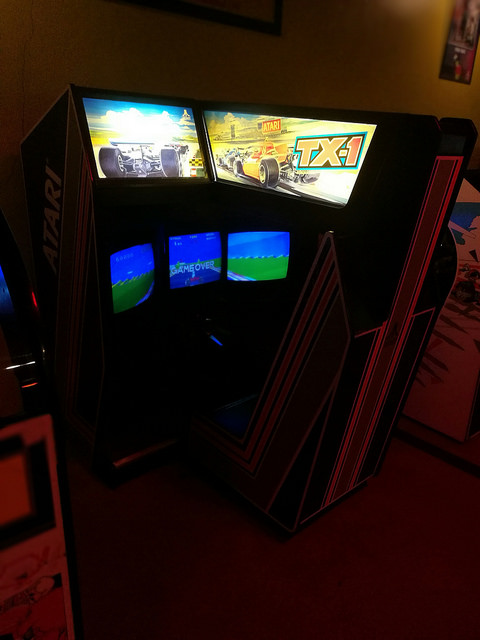 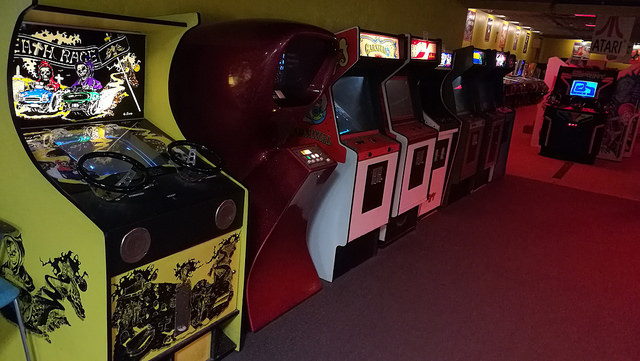 Sitdown versions of Outrun Deluxe, Stun Runner and Spy Hunter – all three very much of their time: 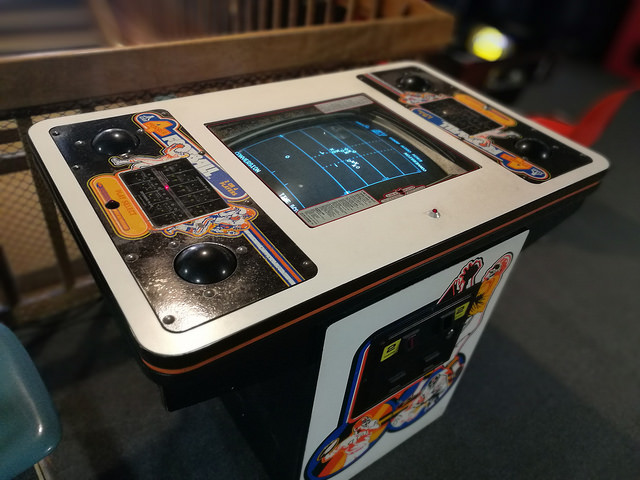 And then there’s this. Moppet Video’s Leprechaun. Pint sized arcade gaming for kids, sited on the middle floor level. Only four of these cabinets are known to exist:

Pinballs are also showcased at Funspot. Again, many of these have been at the property since being purchased up to 45 years ago. All date from the 60’s through to mid 80’s: 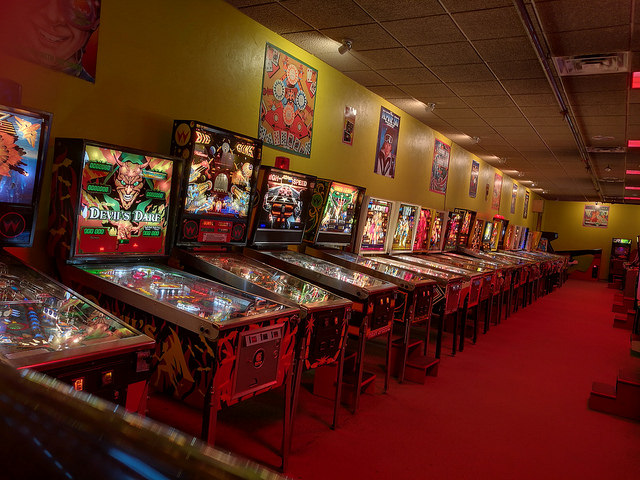 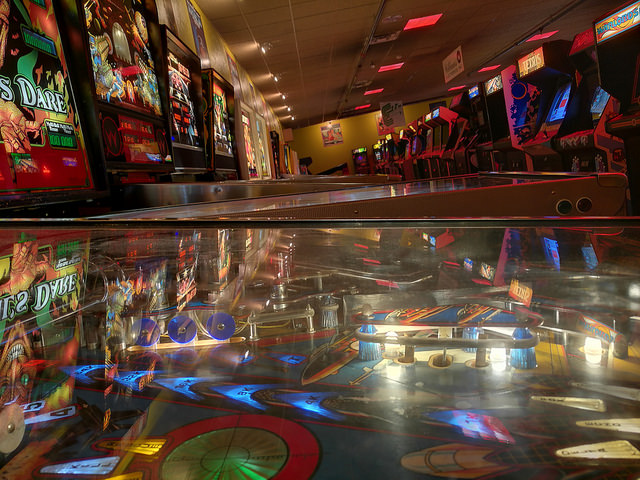 Again, all fully working and operational. I should point out that ACAM’s work doesn’t end with simply maintaining these machines. They host visits from college students, and programming development teams, and take some of the cabinets out on the road to educate the public about what was our fledgling video game industry. Gary and his team regularly arrange talks about videogame history and development. They truly do great work – above and beyond a simple custodian job.

Funspot is a one-off. Any self-respecting collector should pay a visit – indeed everyone should visit just to relive the hey-day of videogame’s Golden Age. Everything is playable via a token system, and everything you spend helps to maintain and keep these machines alive for future generations to enjoy. You can easily lose yourself in the video arcade for a whole afternoon and spend no more than $20, discovering new classic arcade games. Looking around, you are reminded why we regard this place as the Mecca of classic arcade gaming.

The business as a whole is very successful, with the backbone of income coming from redemption machines. Bob tells us that this year alone the redemption prize ticket machines at Funspot spewed out 82 million tickets. No, that’s not a typo – 82 million! You can enjoy a beer at the tavern, outdoor climbing and zip wires, ten pin bowling at its full size lanes, grab a bite to eat at the cafe and of course enjoy the mini golf course upon which the business was built over 40 years ago. Although now housed indoors, the course still uses the original props and layouts.

The place oozes history – there’s so much to see and take in. Much of the King of Kong movie was filmed here, and the world’s first ever perfect game of Pac-Man was played under Funspot’s roof. Countless arcade world records have been achieved and lost here over the years. The surrounding scenery is absolutely stunning – Lake Winnipesaukee is worth the trip alone.

This isn’t my video, but it gives you an idea of the atmosphere and sheer scale of the arcade floor:

So pack a bag, fly into Boston MA, or Manchester NH, rent a car and make the trip up the I93 through the beautiful countryside of New Hampshire and lose yourself for a day at the American Classic Arcade Museum. If you get there during off-season and mid-week as we tend to do, you will have the run of the whole place to yourself.

It’s well worth the trip. Many thanks to Bob Lawton, Gary Vincent, Mike Stulir and the Funspot team for making us traveling Brits so welcome at ACAM each year. We’ll see you again next year guys!

If you’d like to learn more about Funspot, I’ll leave you with this mini-documentary released this year, which takes a look at the history of the place and the people who frequent the arcade:

Thanks as always for visiting the blog this week. Please share this article using the social media buttons below.